Truth Coming Out of Her Well

Beginning in the mid-1890s, in the last decade of his life, Gérôme made at least four paintings personifying Truth as a nude woman, either thrown into, at the bottom of, or emerging from a well. The imagery arises from a translation of an aphorism of the philosopher Democritus, "Of truth we know nothing, for truth is in a well". [1] (Greek ἐτεῇ δὲ οὐδὲν ἴδμεν: ἐν βυθῷ γὰρ ἡ ἀλήθεια, eteêi dè oudèn ídmen: en buthô gàr hē alḗtheia, [literally] "in reality we know nothing; for the truth is in an abyss".) The nudity of the model may arise from the expression la vérité nue, "the naked truth". [2]

At the Champs Elysées Salon of 1895, Gérôme showed a painting entitled Mendacibus et histrionibus occisa in puteo jacet alma Veritas (English: The nurturer Truth lies in a well, having been killed by liars and actors), in which he depicted "naked Truth killed by Falsehood, her body flung into a well and the mirror after her, from which flashes of light are cast as it lightens the dark abyss". [3] At the next Salon in 1896, Gérôme showed Truth Coming Out of Her Well. [4]

It has been assumed that both paintings (like a similar, later work by Édouard Debat-Ponsan) were comments on the Dreyfus affair, [5] [6] but art historian Bernard Tillier argues that Gérôme's images of Truth and the well were part of his ongoing diatribe against Impressionism. [7] [8]

In a preface for Émile Bayard's Le Nu Esthétique published in 1902, Gérôme uses the metaphor of Truth and the well to characterize the profound and irreversible influence of photography:

(Photography is an art. It forces artists to discard their old routine and forget their old formulas. It has opened our eyes and forced us to see that which previously we have not seen; a great and inexpressible service for Art. It is thanks to photography that Truth has finally come out of her well. She will never go back.)

Gérôme kept a least one of the paintings. When he died in 1904, "the maid found him dead in the little room next to his atelier, slumped in front of a portrait of Rembrandt and at the foot of his own painting, Truth"—but the source for this anecdote, the biographer Charles Moreau-Vauthier, does not specify which painting of Truth. [10] [11]

Since 1978, Truth Coming Out of Her Well has been part of the permanent exhibition at the Musée Anne de Beaujeu in Moulins, France. In 2012, after the painting traveled to Los Angeles, Paris and Madrid, [12] the museum featured the exhibition La vérité est au musée ("Truth is at the Museum"), which collected numerous drawings, sketches, and variants made by Gérôme, and by other artists, relating to the painting and its theme. [13] The multiple interpretations of the painting's enigmatic meaning prompted one of the museum's curators to say, "C'est notre Joconde à nous." ("This is our Mona Lisa .") [7] 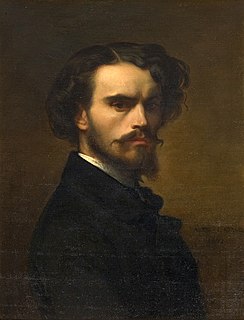 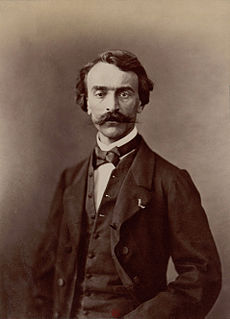 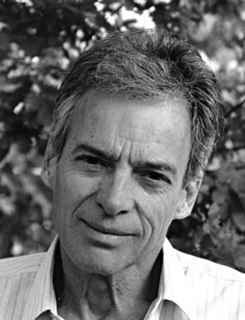 Michel Henry was a French philosopher, phenomenologist and novelist. He wrote five novels and numerous philosophical works. He also lectured at universities in France, Belgium, the United States, and Japan.

The Musée des Augustins de Toulouse is a fine arts museum in Toulouse, France which conserves a collection of sculpture and paintings from the Middle Ages to the early 20th century. The paintings are from throughout France, the sculptures representing Occitan culture of the region with a particularly rich assemblage of Romanesque sculpture.

Jean-Jacques Gautier was French theatre critic, novelist and essayist. A Norman via his father and a champenois via his mother, he was elected a member of the Académie française in 1972.

Édouard Debat-Ponsan was a French academic painter noted for his allegorical works, scenes of peasant life and Orientalist works.

Antonio de La Gándara was a French painter, pastellist and draughtsman. La Gándara was born in Paris, France, but his father was of Spanish ancestry, born in San Luis Potosí, Mexico, and his mother was from England. La Gándara's talent was strongly influenced by both cultures. At only 15 years of age, La Gándara was admitted as a student of Jean-Léon Gérôme and Cabanel at the École des Beaux-Arts. Soon, he was recognized by the jury of the 1883 Salon des Champs-Élysées, who singled out the first work he ever exhibited: a portrait of Saint Sebastian. 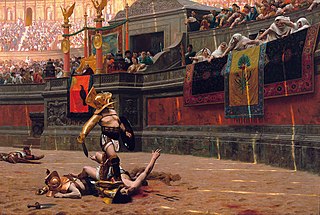 Pollice Verso is an 1872 painting by French artist Jean-Léon Gérôme, featuring the eponymous Roman gesture directed to the winning gladiator.

Georges Jules Victor Clairin was a French Orientalist painter and illustrator. He was influenced by Eastern imagery Moorish architecture, and visited North Africa many times, in particular Algeria, Morocco and Egypt. In Paris he led the life of a socialite, and befriended the glamorous actress Sarah Bernhardt, his friend for 50 years, and is today best known for his 'in costume' and informal intimate portraits of her.

Ploughing in the Nivernais, also known as Oxen ploughing in Nevers or Plowing in Nivernais, is an 1849 painting by French artist Rosa Bonheur. It depicts two teams of oxen ploughing the land, and expresses deep commitment to the land; it may have been inspired by the opening scene of George Sand's 1846 novel La Mare au Diable. Commissioned by the government and winner of a First Medal at the Salon in 1849, today it is held in the Musée d'Orsay in Paris. 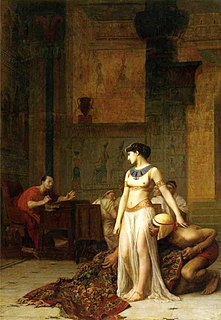 Cleopatra and Caesar, also known as Cleopatra Before Caesar, is an oil on canvas painting by the French Academic artist Jean-Léon Gérôme, completed in 1866. The work was originally commissioned by the French courtesan La Païva, but she was unhappy with the finished painting and returned it to Gérôme. It was exhibited at the Salon of 1866 and the Royal Academy of Arts in 1871.

La Vérité may refer to:

Henri Beau was a French-Canadian Impressionist painter. He is noted for Chemin en été, La dispersion des Acadiens, L'arrivée de Champlain à Québec, and Les Noces de Cana. Beau is a largely forgotten artist due to his long absence from Canada. His widow Marie Beau worked towards establishing his reputation as an artist in Canada after his death. He was only recognized as a notable artist, decades after his death, with major retrospectives of his paintings celebrating his career by the Galerie Bernard Desroches in Montréal in 1974, and at the Musée du Québec in Québec City in 1987. 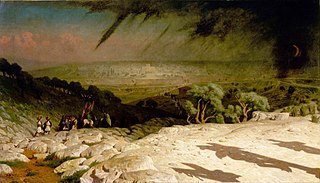 Jerusalem is an 1867 painting by the French artist Jean-Léon Gérôme. It is also known as Golgotha, Consumatum Est and The Crucifixion. The foreground depicts the ground of Golgotha with the shadows of three crucified men: Jesus and the two thieves. Further back in the picture is a crowd of people moving away from the scene. In the background is the city of Jerusalem under a cloudy sky. 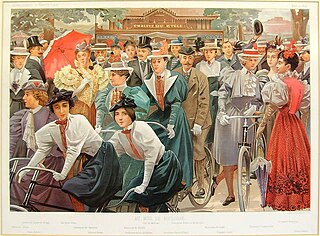 Jean Baptiste Guth was a French portrait artist, active from 1875 until a few months before his death.

René Charles Edmond His, who signed his paintings René His or E. René-His, was a formally trained French painter known for landscapes, especially of rivers, and for Orientalist scenes inspired by travel in Algeria. Coming of age and achieving early success at the end of the 1800s, His carried into the twentieth century the rigorous Academic standards and pre-Impressionist realism of earlier French artists like Jean-Léon Gérôme. After the large virtuoso paintings that launched his career, he settled into a steady production of riverine landscapes of more conventional dimensions with exquisite colors and illusionistic depictions of light on still water. He exhibited in the Paris Salon virtually every year of his long career, and his paintings found collectors throughout his lifetime and beyond, especially in France and Great Britain, less so in the United States. 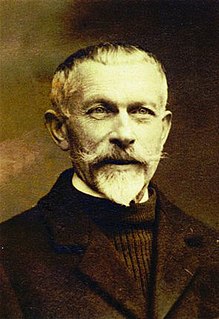 Abel Mignon was a French artist and engraver. He engraved postage stamps for France, its colonies and for Czechoslovakia, as well as posters and currency. He studied at the Paris Académie des Beaux-Arts and was a Legion of Honour awardee.