Truth Decay was an early to late 1990s art rock band from Houston, Texas. Bass guitarist/songwriter Ralf Armin, himself an essential contributor to several experimental hard rock groups such as Culturcide, The Pain Teens, and a sometime member of Really Red, founded the band with drummer Frank Garymartin after they left the Pain Teens. Later The Pain Teens guitarist Scott Ayers joined the band. They released a single, "White Bunnies", on Charnel Music, and a music video for "White Bunnies" was filmed in Houston in 1997, directed by Tim Thomson and shot by Christopher J. Hogan. 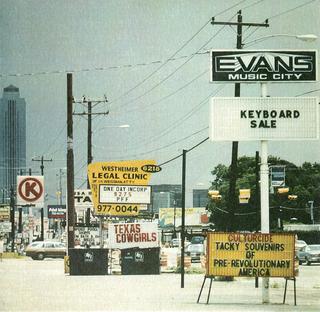 Culturcide was a Houston-based experimental punk band, active from 1980 to 1990 and from 1993 to the present day. They were notorious for their 1986 album Tacky Souvenirs of Pre-Revolutionary America, which earned the band a cult following, but also several legal threats.

In 1998, the band issued a limited edition, handmade CD-R called "Sechs" (Schwarzfahren 98/01). The inside screened flap included this liner quote:

Weathered veterans of the Houston scene, Truth Decay includes former members of the Pain Teens (arguably the best-known-outside-of-Houston postpunk outfit this city's ever produced) and legendary art-punks Ms. Carriage and the Casual Tease. The tall, scary frontman has even played sax on Really Red records, which takes us back to the early Reagan years. So yes, they can be excused for being bitter old bastards, which they are. What'll surprise you is that their music is also so... catchy. They write tight, solid songs, always sharp, often funny and fueled by with guitar pyrotechnics that ought to make big-haired poseurs think about going back to get those dental hygienist certifications their moms are always nagging 'em about. Indeed, TD's weirdly crowd-pleasing arena-rock/punk would qualify as radio-friendly in any other universe but our own. As it is, they work the circuit of local dives regularly. See them grind out an ancient Houston punk masterpiece like "Atomic Bomb" and realize that there have always been great punk rock bands in Houston, that you've probably never heard (or heard of) any of them and that half of them included the guys now in Truth Decay.
— Chris Kemmerer

After disbanding in 2000, Ralf Armin joined the Vulgarians for a while, then Swarm of Angels, and currently he leads a band called Dead Roses.

Truth Decay was also an early '80s Punk Band from Seattle that played several shows at the Metropolis, Gorilla Gardens, Grey Door, and other local underage punk venues. Paul Hsu on guitar, Lou Alexander on bass, Aaron Alexander on drums, Eric Hood on vocals. At some point Jimmy Sangster joined the band on guitar. They never released an album but there are a couple tapes floating around.