Truth Today (Thai : ความจริงวันนี้, romanized: Kwamjing Wannee) is a Thai political talk show hosted by Veera Musikapong, Jatuporn Prompan and Nattawut Sai-kua. The talkshow began in 2008 during the Samak Sundaravej government on the National Broadcasting Services of Thailand TV station. After Abhisit Vejjajiva was appointed Prime Minister, the talkshow was cancelled by the Abhisit government due to its pro-Thaksin leanings.[ verification needed ] In 2009, D-Station began airing the talkshow again.

The Democrat Party is a Thai political party. The oldest party in Thailand, it was founded as a royalist party, and now upholds a conservative and pro-market position.

Abhisit Vejjajiva is a British Thai politician who was the prime minister of Thailand from 2008 to 2011. He is a former university lecturer at Chulachomklao Royal Military Academy and Thammasat University, and was the leader of the Democrat Party from 2005 until he resigned following the party's weak performance in the 2019 election. As leader of the second largest party in the House of Representatives, he was also leader of the opposition – a position he held from December 2008 until his party's en masse resignation from the House on 8 December 2013. That same month, he was formally charged with murder resulting from a crackdown on demonstrators in 2010 that killed 90 people. 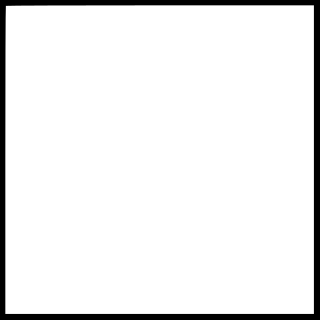 The People's Alliance for Democracy (PAD) is a Thai political movement and pressure group. It was originally a coalition of protesters against Thaksin Shinawatra, the former Prime Minister of Thailand.

People's Television (PTV) was a Thai satellite television station. It was established by former executives of the Thai Rak Thai party after the 2006 Thailand military coup overthrew the Thai Rak Thai-led government. It launched despite warnings from the Council for National Security, the military junta that seized power. PTV executives insisted that if ASTV could operate, then so could PTV.

The Chart Pattana Party is a Thai political party. In 2007 Thai general election, the chairman of the party is Wannarat Channukul. His brother-in-law, the party's "chief advisor" Suwat Liptapanlop is however considered its de facto leader.

The United Front for Democracy Against Dictatorship (UDD), whose supporters are commonly called Red Shirts, is a political pressure group opposed to the People's Alliance for Democracy (PAD), the 2006 Thai coup d'état, and supporters of the coup. Notable UDD leaders include Jatuporn Prompan, Nattawut Saikua, Veera Musikapong, Jaran Ditapichai, and Weng Tojirakarn. The UDD allies itself with the Pheu Thai Party, which was deposed by the 2014 military coup. Before the July 2011 national elections, the UDD claimed that Abhisit Vejjajiva's government took power illegitimately, backed by the Thai Army and the judiciary. The UDD called for the Thai Parliament to be dissolved so that a general election could be held. UDD accused the country's extra-democratic elite—the military, judiciary, certain members of the privy council, and other unelected officials—of undermining democracy by interfering in politics. The UDD is composed of mostly rural citizens from northeast (Isan) and north Thailand, of urban lower classes from Bangkok, and of intellectuals. Although the movement seems to receive support from former prime minister-in-exile Thaksin Shinawatra, not all UDD members support the deposed prime minister.

Thai political crisis may refer to:

The Pheu Thai Party is the third incarnation of a Thai political party founded by former prime minister Thaksin Shinawatra. The Pheu Thai Party was founded on 20 September 2008, as an anticipated replacement for the People's Power Party (PPP), which the Constitutional Court of Thailand dissolved less than three months later after finding party members guilty of electoral fraud. The People's Power Party was itself a replacement for Thaksin's original Thai Rak Thai Party (TRT), dissolved by the Court in May 2007 for violation of electoral laws. As of July 2019, Pheu Thai had 22,771 members. 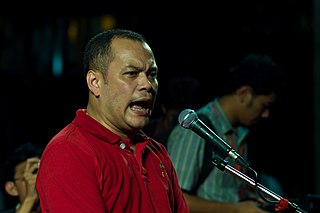 Nattawut Saikua is a Thai politician. He is the secretary-general and spokesman of the United Front for Democracy Against Dictatorship, and a Member of Parliament for the Pheu Thai Party list. In 2008, he was spokesman for the Somchai Wongsawat government. From January 2012 to May 2014, he served as Deputy Minister in Yingluck Shinawatra's cabinet. 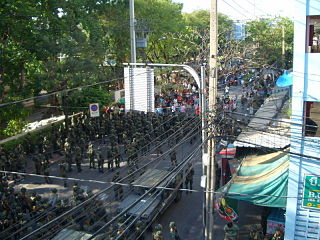 A series of political demonstrations and following unrest occurred in Thailand from 26 March to 14 April 2009 in Bangkok and Pattaya against the government of Abhisit Vejjajiva and the military crackdown that followed. Up to 100,000 people demonstrated in central Bangkok at the height of the protests. The crackdown is also known in Thailand as "Bloody Songkran", referring to the Thai holiday of Songkran, which takes place on 13-15 April.

The 2010 Thai political protests were a series of political protests that were organised by the United Front for Democracy Against Dictatorship (UDD) in Bangkok, Thailand from 12 March–19 May 2010 against the Democrat Party-led government. The UDD called for Prime Minister Abhisit Vejjajiva to dissolve parliament and hold elections earlier than the end of term elections scheduled in 2012. The UDD demanded that the government stand down, but negotiations to set an election date failed. The protests escalated into prolonged violent confrontations between the protesters and the military, and attempts to negotiate a ceasefire failed. More than 80 civilians and six soldiers were killed, and more than 2,100 injured by the time the military violently put down the protest on 19 May.

General elections were held in Thailand on 3 July 2011 to elect the 24th House of Representatives. 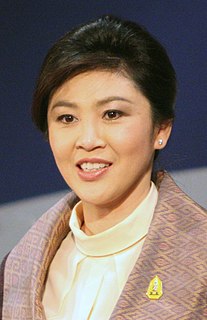 Yingluck Shinawatra, nicknamed Pou, is a Thai businesswoman, politician and a member of the Pheu Thai Party who became the Prime Minister of Thailand following the 2011 election. Yingluck was Thailand's first female prime minister and its youngest in over 60 years. She was removed from office on 7 May 2014 by a Constitutional Court decision.

Abhisit Vejjajiva was formally endorsed by King Bhumibol Adulyadej as Prime Minister of Thailand on 17 December 2008. Abhisit ascended to power amid a global economic crisis.

The history of Thailand since 2001 has been dominated by the politics surrounding the rise and fall from power of former Prime Minister Thaksin Shinawatra, and subsequent conflicts, first between his supporters and opponents, then over the rising military influence in politics. Thaksin and his Thai Rak Thai Party came to power in 2001 and became very popular among the electorate, especially rural voters. Opponents, however, criticized his authoritarian style and accused him of corruption. Thaksin was deposed in a coup d'état in 2006, and Thailand became embroiled in continuing rounds of political crisis involving elections won by Thaksin's supporters, massive anti-government protests by multiple factions, removals of prime ministers and disbanding of political parties by the judiciary, and two military coups. 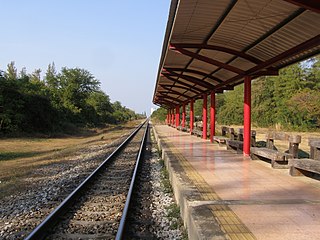 Suan Son Pradiphat Railway Halt is a railway halt located in Nong Kae Subdistrict, Hua Hin District, Prachuap Khiri Khan. It is located 221.03 km (137.3 mi) from Thon Buri Railway Station. Nearby is Thailand's first automatic level crossing, which opened for use on August 7, 2010 by Abhisit Vejjajiva while he was a Prime Minister. An excursion train terminating here, runs from Bangkok every weekend. 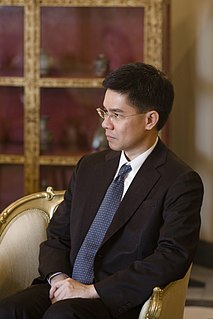 Panitan Wattanayagorn is a Thai political scientist and an associate professor in the Faculty of Political Science, Chulalongkorn University. He has held advisory and executive positions in government of Thailand administrations over the past two decades. He is Chairman of the Prime Minister's Security Advisory Committee and an adviser to the National Security Council and a member of Thailand's National Cyber Security Committee.

Jurin Laksanawisit (林明利) is a Thai Democrat Party politician and author. He was former Minister of Public Health and Minister of Education during Abhisit Vejjajiva premiership along with member of the House of Representatives for eleven times.