A latecomer to the passenger facilities on the Helston branch, Truthall Halt was opened on 3 July 1905, at a location about one and three-quarters miles (2.8 km) north of Helston. [2] It was located just above the 300 feet (91 m) contour and served the villages of Trannack and Gwavas, and also Truthall Manor. Truthall Halt was the first stop on the line from Helston and was a short platform with an iconic "Pagoda" style shelter.

Thuthall Halt was constructed adjacent to a road overbridge and had pedestrian access down a short flight of shallow steps from the road; there was no vehicular access. It had a single platform 84 feet long on the down side of the line, though it was shortened later to about 50 feet. [3] The platform had stone edging and a cinder surface and infill held back by wooden slats retained by wooden posts. [4]

In 2016–17 the platform was rebuilt and re-opened in March 2017. [7] On 9 February 2019, Truthall Halt and the Helston Railway won the Heritage Railway Association Annual Award for Small Groups for the work in restoring Truthall. [8]

The platform has been rebuilt by the Helston Railway as their third station along the line. The halt has been restored in its original two coach length with as many original features as possible [9] including a replica of the GWR Pagoda shelter has been built new from photos and original drawings of the shelter. [1] The restored station won the Cornish Buildings Group award in 2019 for its "considerable research and constructional ingenuity". [10]

The Maritime Line is a railway line that runs in the valley of the River Fal from Truro, the county town, to Falmouth on the south coast of Cornwall, United Kingdom. 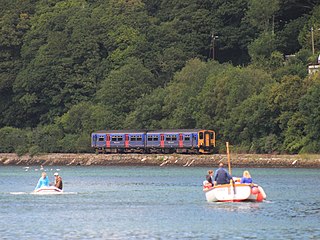 The Looe Valley Line is an 8+3⁄4 miles (14 km) community railway from Liskeard to Looe in Cornwall, United Kingdom, that follows the valley of the East Looe River for much of its course. It is operated by Great Western Railway.

Saltash railway station serves the town of Saltash in Cornwall, England. It is on the south side of the town between the Royal Albert Bridge which crosses the River Tamar and the Coombe Viaduct which spans a small tributary of the same river. Trains are operated by Great Western Railway. The station is 250 miles 8 chains (402.5 km) from London Paddington via Bristol Temple Meads.

St Germans railway station serves the village of St Germans in Cornwall, England. The station is managed by Great Western Railway and is situated on the Cornish Main Line 10 miles 33 chains (16.8 km) from the line's northern terminus of Plymouth and 255 miles 10 chains (410.6 km) from London Paddington via Bristol Temple Meads. The station is situated just west of the St Germans Viaduct. 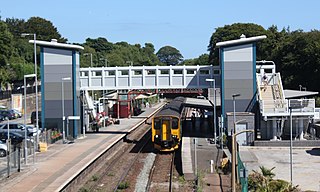 St Austell station is a Grade II listed station which serves the town of St Austell, Cornwall, England. It is 286 miles (460 km) from London Paddington via Bristol Temple Meads. The station is operated by Great Western Railway, as is every other station in Cornwall. 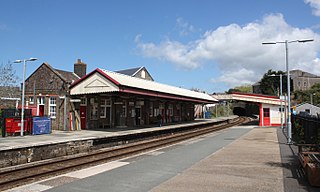 Redruth station serves the town of Redruth, Cornwall, United Kingdom, and is situated on the Cornish Main Line between Truro and Camborne. The station is 310 miles (500 km) from London Paddington via Bristol Temple Meads.

St Erth railway station is a Grade II listed station situated at Rose-an-Grouse in Cornwall, United Kingdom. It serves the nearby village of St Erth, which is about 0.75 miles (1.21 km) away, and is the junction for the St Ives Bay Line to St Ives. The station is 321 miles (517 km) measured from London Paddington via Bristol Temple Meads.

Penhelig railway station serves the eastern outskirts of the seaside resort of Aberdyfi in Gwynedd, Wales. It was opened by the Great Western Railway in 1933. 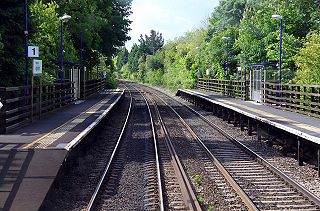 Appleford railway station serves the village of Appleford-on-Thames in Oxfordshire, England, as well as nearby settlements such as Sutton Courtenay. It is on the Cherwell Valley Line between Didcot Parkway and Banbury, 55 miles 16 chains (88.8 km) measured from London Paddington. The station and all trains serving it are operated by Great Western Railway.

Coombe Junction Halt railway station serves the villages of Coombe and Lamellion near Liskeard, Cornwall, England, UK. It is situated on the Looe Valley Line and operated by Great Western Railway. All trains on this line have to reverse at Coombe Junction, but very few continue the short distance into the platform to allow passengers to alight or join the train.

Sithney is a village and civil parish in West Cornwall, England, United Kingdom. Sithney is north of Porthleven. The population including Boscadjack and Crowntown at the 2011 census was 841.

There are seventeen disused railway stations on the Cornish Main Line between Plymouth in Devon and Penzance in Cornwall, England. The remains of nine of these can be seen from passing trains. While a number of these were closed following the so-called "Beeching Axe" in the 1960s, many of them had been closed much earlier, the traffic for which they had been built failing to materialise.

The Truro and Newquay Railway was a Great Western Railway line in Cornwall, United Kingdom designed to keep the rival London and South Western Railway (LSWR) out of the west of the county. The line was completed in 1905 and closed in 1963.

The archetypal Pagoda Platform Shelter was a distinctively-shaped corrugated iron structure used by passengers waiting at railway stations in Wales and southern England.

Praze railway station was built to the south of the village of Praze-An-Beeble, Cornwall, England, at an elevation of 360 feet (110 m). It was an intermediate station on the single-track Helston Railway between Gwinear Road and Nancegollan, and was opened on 9 May 1887 when the line opened. The line closed on 5 October 1964 and since closure a house has been built on the site of the station and the girders and bridge deck that took the railway over the road have been removed, leaving just the brick abutments. The only other sign of a station near the village is the road name "Station Hill".

Nancegollan railway station located in Nancegollan, Cornwall served an important agricultural district and was also the railhead for the fishing port of Porthleven.