Last updated June 18, 2021
Single by James Brown and The Famous Flames
For other uses, see Try Me (disambiguation).

"Try Me", titled "Try Me (I Need You)" in its original release, is a song recorded by James Brown and The Famous Flames in 1958. It was a #1 R&B hit and charted #48 Pop - the group's first appearance on the Billboard Hot 100. [1] It was Brown and the Flames' second charting single, ending a two-year dry spell after the success of "Please, Please, Please".

By 1958 James Brown's career was faltering. After disputes over royalties, songwriting credit, and the indignity of having been relegated to backup singers on the billing of "Please, Please, Please", most of the original Famous Flames (including founder Bobby Byrd) had walked out on him; only Johnny Terry remained. Brown continued to perform with a backing band and a new Flames lineup consisting of members of Little Richard's former vocal group, the Dominions. ("Big Bill" Hollings, Louis Madison, and J.W. Archer). [2] They recorded more songs for Federal Records, but nine of their singles in a row failed to chart.

On the way back to Macon, Georgia after a disappointing West Coast tour, Brown approached his guitar player Bobby Roach with a tune he said he had been given by a patron at the Million Dollar Palms, a Florida nightclub. After Roach crafted a guitar part for "Try Me", Brown and the Flames worked out the vocal harmonies together and cut a demo to send to label head Syd Nathan. Nathan was impressed with it and arranged for a recording session in New York with producer Andy Gibson and a group of seasoned session musicians. [3] Despite the contributions of other people, Brown took the sole writing credit for the song.

In his 1986 autobiography, Brown described "Try Me" as "really a pop tune. I had heard "Raindrops" by Dee Clark and "For Your Precious Love" by Jerry Butler and the Impressions, so I wrote my song to fit between them." [4] However, "Raindrops" was actually released more than two years after "Try Me".

Released in October 1958, the song became their first to crack the R&B charts in three years and their first ever to crack the Billboard Hot 100 after their relative failure of "Please, Please, Please" peaking at number 5 on Billboard's Bubbling Under chart (or #105). The song peaked at number one on the R&B chart in February of 1959 and reached number 48 on the Hot 100. [1] [5] The song sold over a million copies and saved the Famous Flames from having their contract dropped due to lack of hits following the original Famous Flames disbanding and Brown's struggles to deal with the group and their performances on the chitlin' circuit. The song was also the best-selling R&B single of 1958, [6] [7] and its success gave Brown confidence in his own abilities as a musician and gave him the needs to build his career.[ citation needed ]

Performances of "Try Me" appear on Live at the Apollo and most of Brown's subsequent live albums. Brown & The Flames recorded a version of "Try Me" with strings for his 1963 album Prisoner of Love.

Bone Thugs-N-Harmony member Bizzy Bone sampled this song in his track, "I Need You," released on his album, "A Song For You." 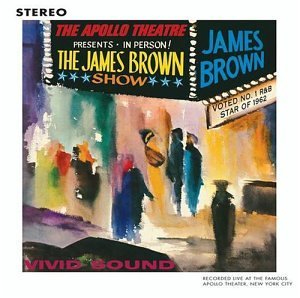 Live at the Apollo is the first live album by James Brown and the Famous Flames, recorded at the Apollo Theater in Harlem and released in 1963 by King Records. 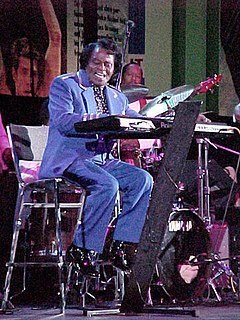 This is a discography chronicling the musical career of James Brown. Brown joined Bobby Byrd's vocal group The Flames in 1953, first as a drummer, and then as leading front man. Later becoming The Famous Flames, they signed with Federal Records in 1956 and recorded their first hit single, "Please, Please, Please", which sold over a million copies. Brown was discovered by Famous Flames founder Bobby Byrd, who recruited him for his vocal group. 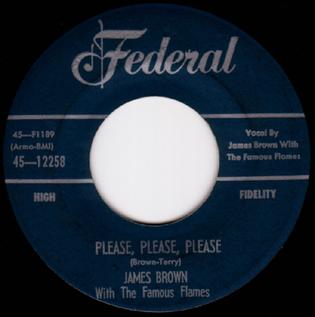 "Please, Please, Please" is a rhythm and blues song performed by James Brown and The Famous Flames. Written by Brown and Johnny Terry and released as a single on Federal Records in 1956, it reached No. 6 on the R&B charts. The group's debut recording and first chart hit, it has come to be recognized as their signature song. 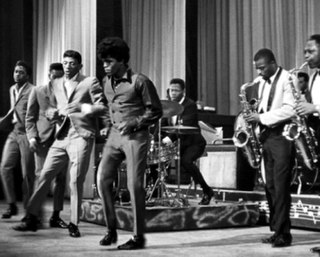 The Famous Flames were an American rhythm and blues vocal group founded in Toccoa, Georgia, in 1953 by Bobby Byrd. James Brown first began his career as a member of the Famous Flames, emerging as the lead singer by the time of their first appearance professional recording, "Please, Please, Please", in 1956.

"Think" is a rhythm and blues song written by Lowman Pauling and originally recorded by his group The "5" Royales. Released as a single on King Records in 1957, it was a national hit and reached number nine on the U.S. R&B chart. 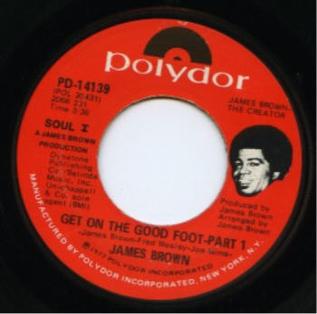 "Get on the Good Foot" is a funk song performed by James Brown. It was released in 1972 as a two-part single that charted #1 R&B and #18 Pop. It also appeared on an album of the same name released that year. Partly due to the unwillingness of Brown's record labels to certify sales of his previous hits, "Get on the Good Foot" was his first gold record. Billboard ranked it as the No. 99 song for 1972. 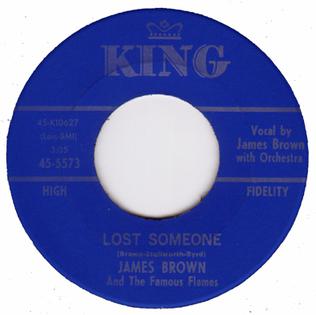 "Lost Someone" is a song recorded by James Brown in 1961. It was written by Brown and Famous Flames members Bobby Byrd and Baby Lloyd Stallworth. Like "Please, Please, Please" before it, the song's lyrics combine a lament for lost love with a plea for forgiveness. The single was a #2 R&B hit and reached #48 on the pop chart. According to Brown, "Lost Someone" is based on the chord changes of the Conway Twitty song "It's Only Make Believe".

"Bewildered" is a popular song written in 1936 by Teddy Powell and Leonard Whitcup. It was a 1938 hit for Tommy Dorsey and His Orchestra. 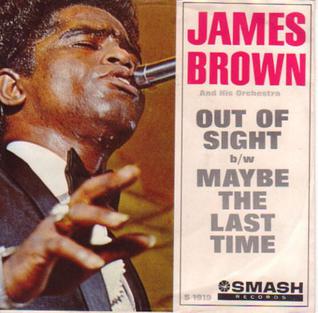 "Out of Sight" is a rhythm and blues song recorded by James Brown in 1964. A twelve-bar blues written by Brown under the pseudonym "Ted Wright", the stuttering, staccato dance rhythms and blasting horn section riffs of its instrumental arrangement were an important evolutionary step in the development of funk music. In his 1986 autobiography Brown wrote that

"Out of Sight" was another beginning, musically and professionally. My music - and most music - changed with "Papa's Got a Brand New Bag", but it really started on "Out of Sight" ... You can hear the band and me start to move in a whole other direction rhythmically. The horns, the guitars, the vocals, everything was starting to be used to establish all kinds of rhythms at once... I was trying to get every aspect of the production to contribute to the rhythmic patterns.

"Shout and Shimmy" is an R&B song written by James Brown, and recorded by him and The Famous Flames. It rose to #16 on the R&B chart and #61 on the Billboard Hot 100.

"My Thang" is a funk song written and recorded by James Brown. Unlike most of his songs, this song was released not as a two-part single, but instead issued with three different B-sides. It spent two weeks at number one on the R&B singles chart - Brown's second #1 in a row, following "The Payback" - and reached No. 29 on the Billboard Hot 100 in July 1974. The song also appeared on Brown's 1974 double album Hell. 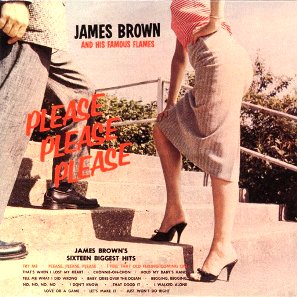 Please Please Please is the debut studio album by the Famous Flames under the billing "James Brown and His Famous Flames", featuring the first album of recordings during Brown's long career. It includes the group's first two hit singles, the title track and "Try Me", along with all the non-charting singles and b-sides he had recorded up to the time of the album's release. The album was reissued in 2003 by Polydor on a Japanese 24-bit remastered import CD packaged in a miniature LP sleeve.

"Oh Baby Don't You Weep" is a song recorded in 1964 by James Brown and The Famous Flames. Based upon the spiritual "Mary Don't You Weep", it was recorded as an extended-length track and released as the first two-part single of Brown's recording career. It peaked at #23 on the Billboard Hot 100 and at #4 on the Cash Box R&B Chart.. It was the last original song featuring the Famous Flames to chart, not counting the 1964 re-release of "Please, Please, Please" and the 1966 B-side release of the Live at the Apollo performance of "I'll Go Crazy".

"I'll Go Crazy" is a rhythm and blues song recorded by James Brown and The Famous Flames. Released as a single in 1960, it was Brown's fourth R&B hit, charting at #15. Brown and the Flames also performed it as the first song on their 1963 album Live at the Apollo. 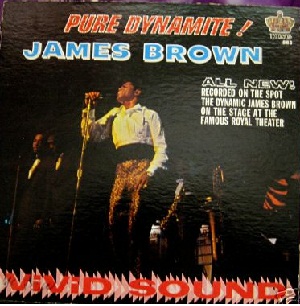 Pure Dynamite! Live At The Royal is a 1964 live album by James Brown and The Famous Flames. Originally issued on King Records, it was the live follow-up to Brown's 1963 Live at the Apollo LP, and like that album, reached the Top 10 of the Billboard album charts, peaking at #10. It was recorded live at the Royal Theatre in Baltimore, Maryland, a popular venue for R&B artists of the day. The album takes its title from Brown's most famous nickname at the time, "Mr. Dynamite".

Live at the Apollo, Volume II is a 1968 live double album by James Brown and The Famous Flames, recorded in 1967 at the Apollo Theater in Harlem. It is a follow-up to Brown's 1963 recording, Live at the Apollo. It is best known for the long medley of "Let Yourself Go", "There Was a Time", and "I Feel All Right", followed by "Cold Sweat", which document the emergence of Brown's funk style. It peaked at #32 on the Billboard albums chart. Robert Christgau included the album in his "basic record library" for the 1950s and 1960s.

"The Bells" is a rhythm and blues song written by Billy Ward and Rose Ann Marks and recorded by Billy Ward and His Dominoes in 1952, featuring Clyde McPhatter on lead tenor. It was released on Federal Records as the B-side of the group's single "Pedal Pushin' Papa". It was a bigger hit than the A-side, reaching #3 on the R&B chart.

"Like a Baby" is a song written by Jesse Stone. It was recorded by Vikki Nelson for a Vik Records single in 1957. It was also recorded by Elvis Presley for his 1960 album Elvis Is Back!. James Brown and the Famous Flames recorded the song and released it as a single in 1963, which charted No. 24 R&B. The single's B-side, an instrumental version of "Every Beat of My Heart", also charted, reaching No. 99 on the Billboard Hot 100. Brown and the Flames performed "Like a Baby" on their 1964 live album Pure Dynamite! Live at the Royal.

"Ain't That a Groove" is a song written by James Brown and Nat Jones. Brown recorded it in 1965 with the female vocal group The Jewels and a studio band arranged and conducted by Sammy Lowe. Released in edited form as a two-part single in 1966, it charted #6 R&B and #42 Pop. The unedited studio recording of the song was included in the 1991 box set Star Time.