A try square or try-square is a woodworking tool used for marking and checking 90° angles on pieces of wood. Though woodworkers use many different types of square, the try square is considered one of the essential tools for woodworking. [1]

The square in the name refers to the 90° angle. To try a piece of wood is to check if the edges and faces are straight, flat, and square to one another. [2] A try square is so called because it is used to try how square the workpiece is. [3]

A try square is made of two key parts, the blade (also known as a beam or tongue) and the stock, which are fixed together at 90° to form an 'L' shape. [4]

Often the top of the stock will not cover the full width of the blade so the stock does not get in the way when making a mark. [6] This gap also allows space should an inaccurate blade need to be planed, filed or sanded.

Try squares are typically 3 to 24 inches (76 to 610 mm) long. [6] 3 in (76 mm) squares are handier for small tasks that don't require a longer square, such as marking small joints. A typical general purpose square is 6 to 8 inches (150 to 200 mm). Larger squares are used for tasks such as cabinetry, and are more likely to be made by the woodworker themselves, but other methods are often preferred for such larger tasks. [7] [2]

A common form of try square has a broad blade made of steel that is riveted into a stable, dense tropical hardwood stock, often ebony or rosewood. The inside of the wooden stock usually has a brass strip fixed to it to reduce wear. [7] [4]

On some squares the top of the stock is angled at 45°, so the square can be used as a mitre square for marking and checking 45° angles.

A similar type of square is the engineer's square used in metalworking and by some woodworkers. The blade is made with both a steel blade and a steel stock and is usually manufactured to a higher degree of accuracy.

The stock is usually held against the edge of the workpiece and either side of the tongue is then used as a straight edge for making a mark, or as a reference to check the accuracy of an angle. [7] [2]

For making a mark a woodworker might use a pencil, a pen or, for greater accuracy, a marking knife or blade.

Wooden try squares have survived from Ancient Egypt and Ancient Rome and can be seen in art from the time. [8] From the 18th century squares began to be manufactured in factories, prior to that they were typically made from wood and made by the tradesmen themselves. [6] Some woodworkers continue to make their own try squares. [5] [1] [2]

The square is incorporated into the most common Freemasonry symbol, the Square and Compasses. [9] Historically squares have also been used by woodworkers, such as joiners and carpenters, as symbols in signs and heraldry to represent their trade. [10] The square as a symbol is also seen in artistic representations of the Christian saints Thomas the Apostle and James the Less. [11]

A square can become less accurate over time through both common use and abuse, such as the edges becoming worn over time or the square being dropped or mistreated. Wooden squares can also vary with changes in temperature and humidity. For this reason more dimensionally stable woods, such as mahogany, are preferred. [5] [4] 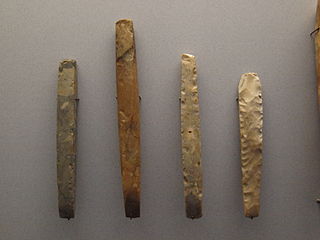 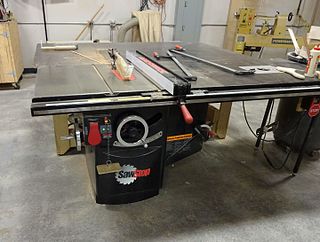 A table saw is a woodworking tool, consisting of a circular saw blade, mounted on an arbor, that is driven by an electric motor. The blade protrudes through the top of a table, which provides support for the material, usually wood, being cut. 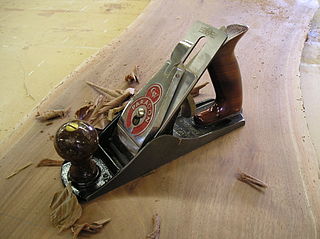 A smoothing plane or smooth plane is a type of bench plane used in woodworking. The smoothing plane is typically the last plane used on a wood surface, removing very fine shavings to leave a smooth finish. When used effectively it quickly produces a finish that equals or surpasses that made by sandpaper. 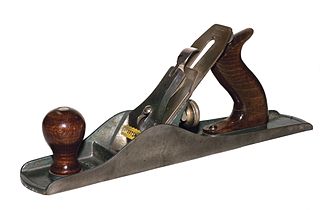 A hand plane is a tool for shaping wood using muscle power to force the cutting blade over the wood surface. Some rotary power planers are motorized power tools used for the same types of larger tasks, but are unsuitable for fine-scale planing, where a miniature hand plane is used. 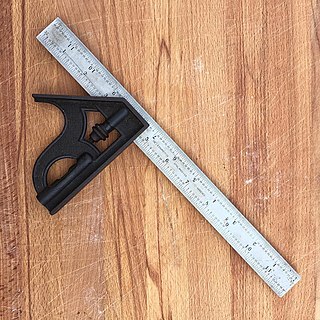 A combination square is a multi-purpose measuring and marking tool used in metalworking, woodworking, and stonemasonry. It is composed of a rule and one or more interchangeable heads that can be attached to the rule.

A spokeshave is a hand tool used to shape and smooth woods in woodworking jobs such as making cart wheel spokes, chair legs, paddles, bows, and arrows. The tool consists of a blade fixed into the body of the tool, which has a handle for each hand. Historically, a spokeshave was made with a wooden body and metal cutting blade. With industrialization metal bodies displaced wood in mass-produced tools. Being a small tool, spokeshaves are not suited to working large surfaces. 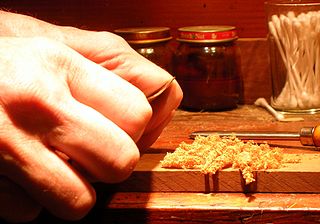 A card scraper or cabinet scraper is a woodworking shaping and finishing tool. It is used to manually remove small amounts of material and excels in tricky grain areas where hand planes would cause tear out. Card scrapers are most suitable for working with hardwoods, and can be used instead of sandpaper. Scraping produces a cleaner surface than sanding; it does not clog the pores of the wood with dust, and does not leave a fuzz of torn fibers, as even the finest abrasives will do. 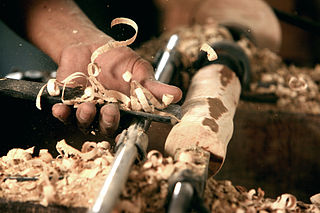 Woodturning is the craft of using the wood lathe with hand-held tools to cut a shape that is symmetrical around the axis of rotation. Like the potter's wheel, the wood lathe is a simple mechanism which can generate a variety of forms. The operator is known as a turner, and the skills needed to use the tools were traditionally known as turnery. In pre-industrial England, these skills were sufficiently difficult to be known as 'the misterie' of the turners guild. The skills to use the tools by hand, without a fixed point of contact with the wood, distinguish woodturning and the wood lathe from the machinists lathe, or metal-working lathe. 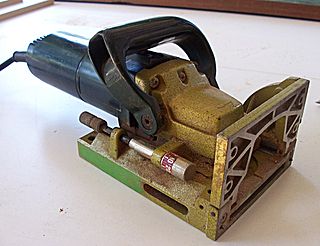 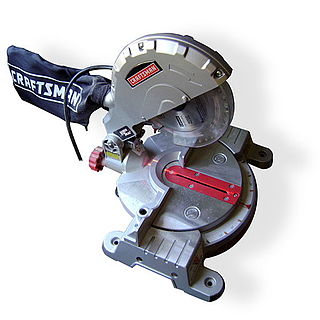 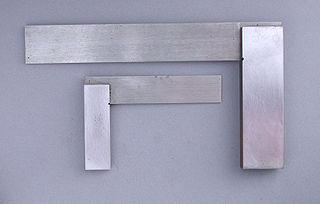 A machinist square or engineer's square is the metalworkers' equivalent of a try square. It consists of a steel blade inserted and either welded or pinned into a heavier body at an angle of 90°. Usually a small notch is present at the inside corner of the square. This prevents small particles from accumulating at the juncture and affecting the square's reading. 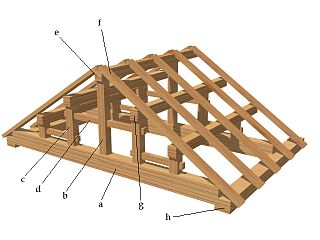 Japanese carpentry was developed more than a millennium ago through Chinese architectural influences such as Ancient Chinese wooden architecture and uses woodworking joints. It involves building wooden furniture without the use of nails, screws, glue or electric tools. 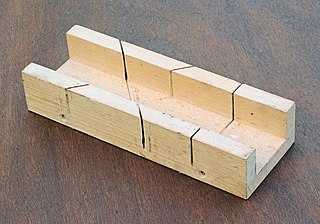 A mitre box or miter box is a wood working appliance used to guide a hand saw for making precise cuts, usually 45° mitre cuts. Traditional mitre boxes are simple in construction and made of wood, while adjustable mitre boxes are made of metal and can be adjusted for cutting any angle from 45° to 90°. 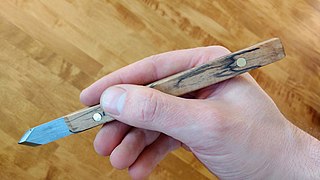 A marking knife or striking knife is a woodworking layout tool used for accurately marking workpieces. It is used to cut a visible line, which can then be used to guide a hand saw, chisel or plane when making woodworking joints and other operations. They are generally used when marking across the grain of the wood, with scratch awls better suited for marking with the grain. 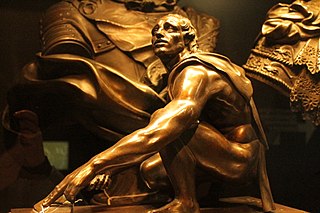 Knife sharpening is the process of making a knife or similar tool sharp by grinding against a hard, rough surface, typically a stone, or a flexible surface with hard particles, such as sandpaper. Additionally, a leather razor strop, or strop, is often used to straighten and polish an edge. 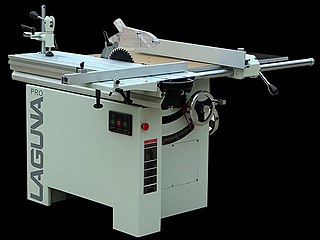 A fence is a part of many woodworking tools, they are typically used to guide or secure a workpiece while it is being sawn, planed, routed or marked. Fences play an important role for both accuracy and safety. Fences are usually straight and vertical, and made from metal, wood or plastic.

A square is a tool used for marking and referencing a 90° angle, though mitre squares are used for 45° angles. Squares see common use in woodworking, metalworking, construction and technical drawing. Some squares incorporate a scale for measuring distances or for calculating angles. 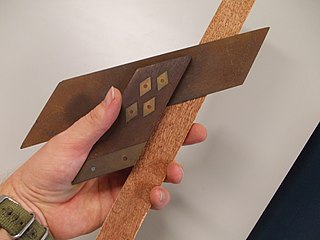