"Try to Follow Me" [1] (Korean : 날 따라 해봐요; RR : Nal Ddara Haebwayo; also known as "Follow Me") is a song by South Korean girl group 2NE1. It was originally released on February 9, 2010 to promote Samsung's "Corby CF" mobile phone. It later was released with the album "To Anyone" in September, 2010.

The song was announced as a promotional single for Samsung's new phone, "Corby CF", [2] just hours before the song's release.

There was no video planned for 2NE1's "Try to Follow Me" but since the popularity of the song, a video was made. This video premiered March 11, 2010. It was filmed by Seo Hyun Seung sometime in February, the girls self-choreographed their dance parts.

It begins with, CL in a suit singing the introduction. After, it shows CL and Dara sharing a motorcycle, then changes to, Minzy and Bom sharing another motorcycle. The verses shows, CL sealed onto a metal bathtub what is upside down with different cameras around her and in her second verse she is wearing a polka dot wig doing a dance. Bom shows her new edgy hair style and in her second verse, it shows her in her own high fashioned clothing. Minzy dances in front of a screen and in her second verse, it shows her laughing at her other self and dancing to the rhythm. Later on, Dara is seen with a gun-blaster as she fights against two Star Wars storm soldiers (later revealed to be CL and Minzy). When Dara shoots the camera with the blaster, it shows all the members in a jungle scene doing a dance. At the end, it shows all of the members dressed up like old fashioned-actresses playing with their feather boas. They do a dance going into each other and then the members change clothes into hip-hop clothing then the song ends (as the song ends it shows CL blowing bubbles and with the scene of the cameras, but normally this was cut out from Korean music channels and the TV show 2NE1 TV).

Sandara Park, also known by her stage name Dara, is a South Korean singer, actress and television presenter. She rose to fame in the Philippines as a contestant on the talent show Star Circle Quest in 2004, after which she had a successful acting and singing career before returning to South Korea in 2007. She made her South Korean debut in 2009 as a member of the K-pop group 2NE1, which went on to become one of the best-selling girl groups of all time before their disbandment in 2016. 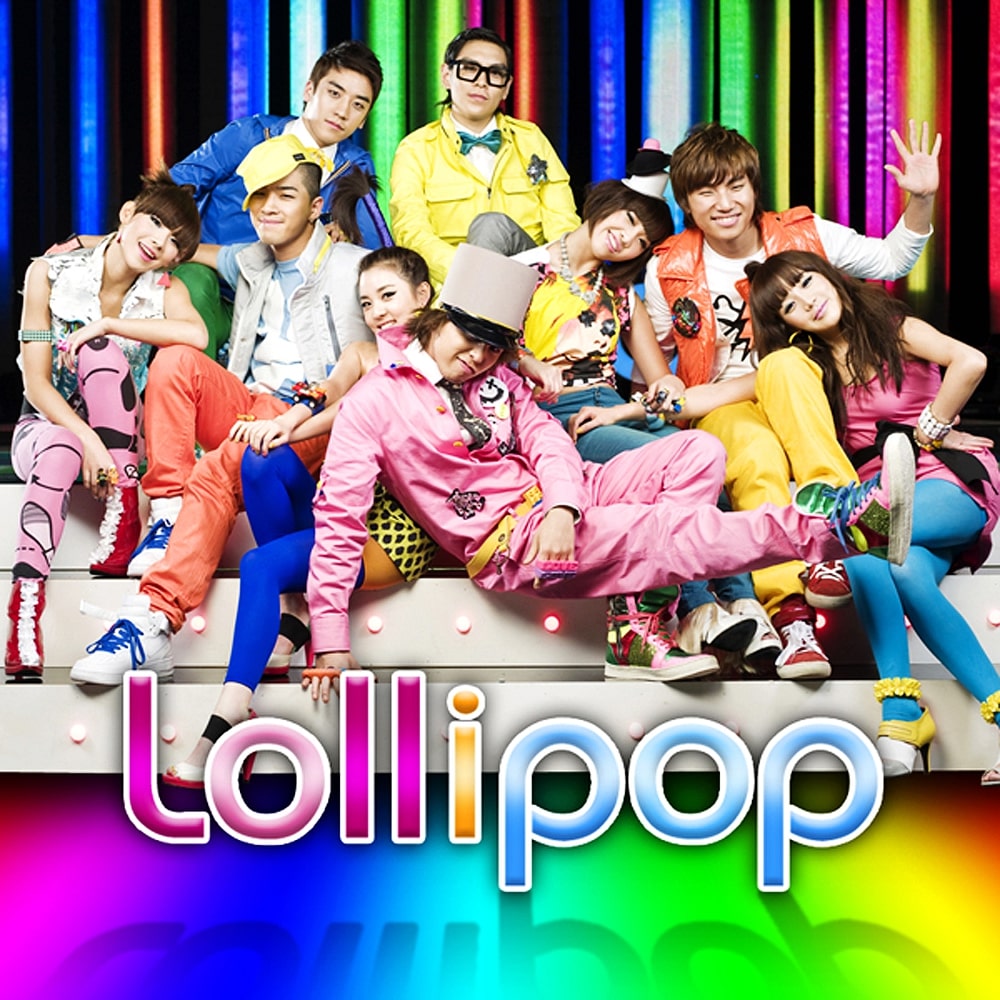 "Lollipop" is a song by Big Bang and 2NE1, created to promote a cellphone by LG Cyon. It interpolates the 1958 hit "Lollipop" written by Julius Dixson and Beverly Ross. The song hit the top spot on various online charts, including a 4-week #1 run on music portal M.Net. "Lollipop" was used to debut 2NE1 unofficially, as it does not serve as their debut single. DJ Wreckx remixed the song for Cyon Bboy Championships. The song went to sell over 3 million digital downloads and became a huge-hit in South Korea, topping the Cyworld chart for April 2009.

2NE1 was a South Korean girl group formed by YG Entertainment that was active between 2009 and 2016. The group consisted of four members: Bom, CL, Dara, and Minzy. Known for breaking the girl group stereotype in K-pop, experimentation across musical styles, their fashion and live performances, 2NE1 was considered one of the most successful and influential South Korean girl groups during their career. Their discography and live performances have caught the attention of numerous publications worldwide, including The New York Times, who named 2NE1's New Evolution Global Tour stop at the Prudential Center in New Jersey as one of the "Best Concerts of 2012". 2NE1 has reportedly sold a cumulative total of over 66.5 million records, which would make them one of the best-selling girl groups of all time.

Park Bom, previously known mononymously as Bom, is a South Korean singer. She is best known as a member of the South Korean girl group 2NE1.

Gong Min-ji, better known by her stage name Minzy, is a South Korean singer, songwriter and dancer. She debuted in 2009 as a member of South Korean girl group 2NE1, which became one of the most popular and successful girl groups worldwide before her departure from the group in April 2016. She released her first solo EP, Minzy Work 01: "Uno", in April 2017. On November 20, 2020, Minzy made her debut in the Philippines with the Tagalog version of her single "Lovely".

To Anyone is the debut studio album by South Korean girl group 2NE1. The album was released on September 9, 2010, by YG Entertainment and CJ E&M Music. 2NE1 worked with YG Entertainment CEO Yang Hyun Suk, Teddy, and e.knock to produce the album. Musically, the album has been classified as mainly a pop record, with additional elements of R&B, dance, and hip hop.

"Clap Your Hands" is a song by South Korean girl group 2NE1. It was released on September 8, 2010 as one of the lead singles from their first full album To Anyone, which was released one day later. The song became a hit on various on and offline charts in addition to peaking at number 3 on the Gaon Digital Chart.

"Go Away" is a song by South Korean girl group 2NE1 from their first studio album To Anyone (2010). The original Korean version was released as the lead single from the album on September 9, 2010. It was produced and written by Teddy Park, with additional Japanese lyrics written by Shoko Fujibayashi. The song was released in Japan on November 16, 2011 as the group's debut single for their first Japanese studio album Collection, which was released on March 28, 2012.

"Can't Nobody" is a song recorded by South Korean girl group 2NE1. It was released as one of the three title tracks from the group's debut studio album To Anyone on September 11, 2010 by YG Entertainment. The song was written and produced by Teddy Park and is described as a dance-pop track with the lyrics revolving around the themes of self-confidence and empowerment. It was a commercial success in South Korea, peaking at number 2 on both the weekly and monthly Gaon Digital Charts and sold more than 2.3 million digital units by the end of the year.

2NE1 was a South Korean girl group signed to YG Entertainment. The discography consists of three studio albums, three extended plays, and twenty-five singles. CL, Bom, Dara, and Minzy make up the quartet. The group established themselves in the Korean music scene in March 2009, with the release of "Lollipop", a collaboration with label mates Big Bang.

"It Hurts (Slow)" is a song by South Korean girl group 2NE1, from their debut album To Anyone. The song was produced by e.knock and Sunwoo Jung-a. The song was released as the seventh single from the album. It was first performed on October 31, 2010, with a music video releasing later that night. The song was praised highly for its unique sound. 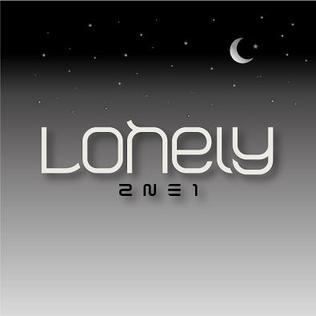 "Lonely" is a song by South Korean girl group 2NE1, serving as one of the lead singles from their 2011 self-titled second EP. The single was written and produced by Teddy Park and was released via digital download and streaming on May 12, 2011 by YG Entertainment. The song was a commercial success, peaking at number 1 on the Gaon Digital Chart in addition to topping all of the South Korean real-time digital charts following its release, achieving a perfect all-kill.

"I Am the Best" is a song recorded by South Korean girl group 2NE1 for their self-titled second EP. The song was written and produced entirely by the group's long-time collaborator Teddy Park and was released for digital download as the third single from the EP on June 24, 2011, under YG Entertainment. "I Am the Best" integrates a variety of musical genres such as electro house, electronic and hip hop, complete with instrumentations of synthesizers and middle eastern inspired rifts. An empowerment anthem, the lyrics revolve around the themes of self-confidence, dominance, and narcissism.

"I Love You" is a song recorded in two languages by South Korean girl group 2NE1. The Korean version was released on July 5, 2012, through YG Entertainment, while the Japanese version was released on September 19 by YGEX as the group's third Japanese single. The song was produced by 2NE1's long-time collaborator Teddy Park. Musically, "I Love You" is described as an affectionate, lush, and "moody synth" dance-pop track that infuses elements of electronic and traditional Korean trot music to create a "different sound" and "new genre of music", whilst still showing the beauty of Korean culture.

"Kiss" is a dance single performed by South Korean idol singer Sandara Park, a visual and member of the girl group 2NE1. The song was used as part of a promotional campaign for Cass Beer. It features the vocals of her co-member, CL. The song was released as her first official single in South Korea and was later included in the album To Anyone.

The Nolza! tour was the debut concert tour by Korean group 2NE1. The tour supported their second extended play, 2NE1 (2011), and its Japanese version, Nolza. Members of Big Bang, Taeyang and GD & TOP, joined the tour as guest performers. An intended show in Bangkok, Thailand was cancelled due to flooding. 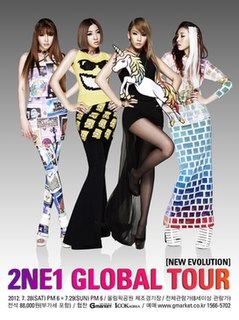 New Evolution Global Tour was the first world tour and second concert tour overall by South Korean girl group 2NE1. It saw shows in 11 cities across 7 countries in Asia and North America spanning from July to December 2012, and promoted all of the group's albums released at the time. The tour attracted an estimated 169,000 attendees from several different continents.

Minzy Work 01: Uno is the debut extended play by South Korean singer Minzy. It was released on April 17, 2017 by The Music Works and distributed by Genie Music. It contains six tracks, including the single and title song "Ninano" duet with South Korean rapper Flowsik. The EP marks Minzy debut as a solo artist, and incorporates a range of genres, including ballad and R&B.

The Power World Tour is the second world tour by South Korean music label YG Entertainment in 2014, the last being the Past, Present & the Future world tour in 2006. The tour marks the entertainment agency's first family concert in two years. The tour kicked off at Kyocera Dome in Osaka, Japan for a two-day performance on April 12 and 13 before visiting other cities in Japan, China and Korea. The tour was officially sponsored by Samsung Galaxy in China, Taiwan and Singapore.

"Missing You" is a song by South Korean girl group 2NE1, released as a digital single simultaneously with its music video on November 21, 2013. The song was produced and written entirely by long-time YG Entertainment producer and collaborator Teddy Park. Commercially, "Missing You" experienced success in South Korea, debuting at number 1 on the Gaon Digital Chart and sold over 1 million digital units by mid-2014.