Tryon Reakirt (21 April 1844 – after 1871) was an American businessman and entomologist. He wrote several papers on butterflies and showed great promise in his field. However his career was cut short when financial and legal difficulties forced him to flee the country.

Tryon Reakirt was born in Philadelphia on April 21, 1844, the son of John Reakirt and Elizabeth Catherine (Tryon) Reakirt. He attended Central High School of Philadelphia and then joined his father in the family business, the import and distribution of pharmaceuticals. In 1868 he invested in a new business, the Delaware Lead Works which manufactured white lead and other lead products.

Reakirt joined the American Entomological Society of Philadelphia in 1863 at the age of nineteen. He became well known for his studies of the butterflies of the American tropics and the Asia Pacific region. In his career as an entomologist, Reakirt described many butterflies for the first time; for example, Reakirt described the Callophrys xami butterfly, commonly referred to as the xami hairstreak or the green hairstreak, in 1867. In 1866 he also wrote a summary of the butterflies of the Rocky Mountains. In all, he published nine articles in the Proceedings of the Entomological Society of Philadelphia and a tenth in the Proceedings of the Academy of Natural Sciences of Philadelphia, the last appearing in 1868. William Henry Edwards regarded him as one of the most competent North American specialists in his field.

Additional details of his life are known from correspondence which he exchanged with Herman Strecker, a fellow entomologist and a dealer in insect collections. They became acquainted around 1866 and Reakirt hired Strecker to mount a large shipment of Philippine butterflies he had purchased from Pierre Joseph Michel Lorquin. In August 1868, Reakirt tried to sell his collection via Strecker to the New York Lyceum (today American Museum of Natural History) for $1800. When the Lyceum turned down the offer, he tried to sell it to the Reading Natural History Society for $1400. But there too, the discussions failed. Strecker then purchased the collection for $1400 and they agreed to a schedule of payments which Strecker subsequently failed to meet.

Meanwhile Reakirt was in serious financial and legal difficulties. At the beginning of 1871, he left the United States for Lima, Peru to avoid a charge that he had forged documents and stolen $110,000 from pharmaceutical companies. In February his company and his father's company were forced into involuntary bankruptcy. In June, using the name Theodore Rand, Reakirt began a new series of correspondence with Strecker. Eleven letters to Strecker have been preserved. In them he inquires about a passport application under an assumed name; he asks for information about countries without an extradition agreement with the United States; and he sets up a system that enables Strecker to invest in the stock market on Reakirt's behalf.

The letters also contained hints that Reakirt might move to Rio de Janeiro and reported that he was ill with dysentery. The last evidence of correspondence from Reakirt is an empty envelope with a postal date of November 1872. No further news of Reakirt has ever been uncovered.

The Reakirt collection, incorporated with the Strecker collection, was purchased in 1908 by the Field Museum of Natural History in Chicago.

Benjamin Dann Walsh was an English-born American entomologist who served as the first official state entomologist in Illinois. He was a leading influence during a time of significant transition in American entomology. Walsh championed the application of scientific methods to control agricultural pests. He was a proponent of biological control as an effective means to manage insects. He was also one of the first American scientists to support Charles Darwin's theory of evolution and was instrumental in securing its broad acceptance in the entomological community. 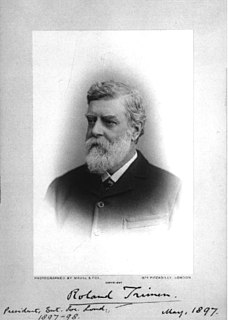 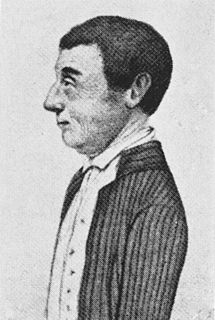 John Abbot was an American naturalist and artist. He was the first artist in the New World to create an extensive series of insect drawings and to show insects in all stages of development. In addition to more than 3,000 insect illustrations, he also produced drawings of birds and plants. To facilitate his work he collected a great number of insects and reared thousands more. He was considered one of the best insect illustrators of his era and his art and insect collections were sold to an eager market in London.

William Henry Edwards was an American businessman and entomologist. He was an industrial pioneer in the coalfields of West Virginia, opening some of the earliest mines in the southern part of the state. He was also a prominent naturalist specializing in the study of butterflies. He wrote The Butterflies of North America, a three-volume treatise that is highly regarded for its scholarship and the quality of its illustrations.

Andrew Dickson Murray FRSE FRPSE FLS was a Scottish lawyer, botanist, zoologist and entomologist. Murray studied insects which caused crop damage, specialising in the Coleoptera. In botany, he specialised in the Coniferae, in particular the Pacific rim conifer species.

Margaret Elizabeth Fountaine, was a Victorian lepidopterist, natural history illustrator, diarist, and traveller who published in The Entomologist's Record and Journal of Variation. She is also known for her personal diaries, which were edited into two volumes by W.F. Cater for the popular market and published posthumously. 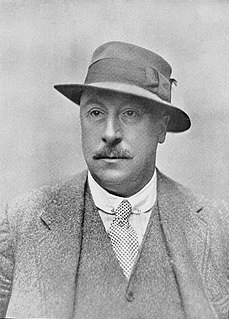 The genus Callophrys consists of butterflies in the family Lycaenidae. It is apparently not monophyletic, but which of the taxa currently considered junior synonyms of Callophrys are valid genera remains to be determined. 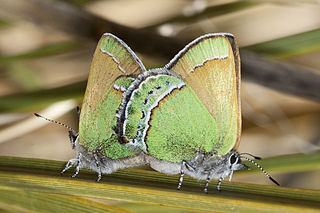 The Sandia hairstreak is a species of butterfly native to North America. A relatively rare butterfly with a limited range, it was discovered in La Cueva Canyon, Albuquerque, in spring of 1958, by Noel McFarland, then a student at the University of Kansas, and described the following year. The Sandia hairstreak was made one of the state insects of New Mexico in a 2002 bill approved the following year.

Norman Denbigh Riley CBE was a British entomologist with a special interest in the Lepidoptera and in particular the Lycaenidae. For many years he was keeper of entomology at the British Museum.

Lepidopterology is a branch of entomology concerning the scientific study of moths and the three superfamilies of butterflies. Someone who studies in this field is a lepidopterist or, archaically, an aurelian.

Leptotes marina, the marine blue or striped blue, is a butterfly of the family Lycaenidae. It is found in North America and Central America. 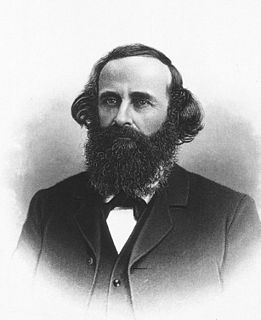 Henry Shimer was a naturalist and physician in Mount Carroll, Illinois. He was also a teacher at the Mount Carroll Seminary, which later became Shimer College; he was the husband of the seminary's founder, Frances Shimer.

Henri Stempffer was a French entomologist who specialized in the study of Lycaenidae butterflies.

Callophrys xami, commonly referred to as the xami hairstreak or green hairstreak, is a butterfly included in the subgenus Xamia and the genus Callophrys in the family Lycaenidae. It was described by Tryon Reakirt in 1867. Other common names for this species, depending on the region, include green hairstreak and elfin. C. xami is considered to be a very rare species of butterfly, and its typical range is in southern Arizona and Texas including down south to Guatemala. The juniper hairstreak and the silver-banded hairstreak butterflies are similar species, but both differ significantly from C. xami in regards to the postmedian white line running across the butterfly wings.