Τrypanosoma equiperdum is a species of kinetoplastid parasites that causes Dourine or covering sickness in horses and other animals in the family equidae. T. equiperdum is the only trypanosome that is not spread by an insect vector. [1] There has been substantial controversy surrounding whether T. equiperdum should be considered a unique species, or a strain of T. evansi or T. brucei . [1] [2] T. equiperdum is unique in that its kinetoplast, the network of connected rings that make up its mitochondrial DNA, consists of thousands of "minicircles" that are identical in sequence. [3] 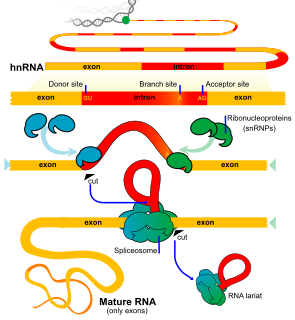 An exon is any part of a gene that will encode a part of the final mature RNA produced by that gene after introns have been removed by RNA splicing. The term exon refers to both the DNA sequence within a gene and to the corresponding sequence in RNA transcripts. In RNA splicing, introns are removed and exons are covalently joined to one another as part of generating the mature messenger RNA. Just as the entire set of genes for a species constitutes the genome, the entire set of exons constitutes the exome. 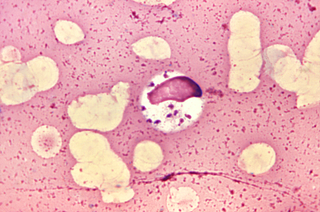 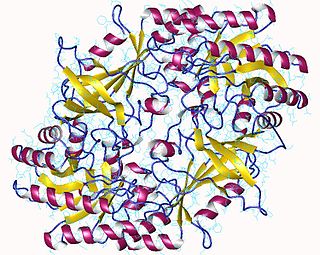 The enzyme ornithine decarboxylase (ODC) catalyzes the decarboxylation of ornithine to form putrescine. This reaction is the committed step in polyamine synthesis. In humans, this protein has 461 amino acids and forms a homodimer.

Trypanosomatida is a group of kinetoplastid excavates distinguished by having only a single flagellum. The name is derived from the Greek trypano (borer) and soma (body) because of the corkscrew-like motion of some trypanosomatid species. All members are exclusively parasitic, found primarily in insects. A few genera have life-cycles involving a secondary host, which may be a vertebrate, invertebrate or plant. These include several species that cause major diseases in humans. Trypanosomatida are intracellular parasites.

Kinetoplastida is a group of flagellated protists belonging to the phylum Euglenozoa, and characterised by the presence of an organelle with a large massed DNA called kinetoplast. The organisms are commonly referred to as "kinetoplastids" or "kinetoplasts" The group includes a number of parasites responsible for serious diseases in humans and other animals, as well as various forms found in soil and aquatic environments. Their distinguishing feature, the presence of a kinetoplast, is an unusual DNA-containing granule located within the single mitochondrion associated with the base of the cell's flagellum. The kinetoplast contains many copies of the mitochondrial genome. 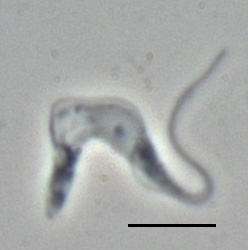 Trypanosoma evansi is a species of excavate trypanosome in the genus Trypanosoma that causes one form of surra in animals. It has been proposed that T. evansi is—like T. equiperdum—a derivative of T. brucei. Due to this loss of part of the mitochondrial (kinetoplast) DNA T. evansi is not capable of infecting the invertebrate vector and establishing the subsequent life-stages. Due to its mechanical transmission T. evansi is not restricted to transmission via the tsetse fly but shows a very broad vector specificity including the genera Tabanus, Stomoxys, Haematopota, Chrysops and Lyperosia. It rarely causes disease in humans, indeed, it has only been recorded in cases where the patient lacks a normal component of human serum, Apolipoprotein L1. T. evansi is very common in India and Iran and causes acute disease in camels and horses, and chronic disease in cattle and buffalo. In Pakistan, it has been found to be the most prevalent trypanosome species in donkeys.

Surra is a disease of vertebrate animals. The disease is caused by protozoan trypanosomes, specifically Trypanosoma evansi, of several species which infect the blood of the vertebrate host, causing fever, weakness, and lethargy which lead to weight loss and anemia. In some animals the disease is fatal unless treated.

Covering sickness, or dourine, is a disease of horses and other members of the family Equidae. The disease is caused by Trypanosoma equiperdum, which belongs to an important genus of parasitic protozoa. The occurrence of dourine is notifiable in the European Union under legislation from the OIE. There currently is no vaccine and although clinical signs can be treated, there is no cure.

A kinetoplast is a network of circular DNA inside a large mitochondrion that contains many copies of the mitochondrial genome. The most common kinetoplast structure is a disk, but they have been observed in other arrangements. Kinetoplasts are only found in Excavata of the class Kinetoplastida. The variation in the structures of kinetoplasts may reflect phylogenic relationships between kinetoplastids. A kinetoplast is usually adjacent to the organism's flagellar basal body, suggesting that it is tightly bound to the cytoskeleton. In Trypanosoma brucei this cytoskeletal connection is called the tripartite attachment complex and includes the protein p166.

The alternative oxidase (AOX) is an enzyme that forms part of the electron transport chain in mitochondria of different organisms. Proteins homologous to the mitochondrial oxidase and the related plastid terminal oxidase have also been identified in bacterial genomes.

Haptoglobin-related protein is a protein that in humans is encoded by the HPR gene. The HPR gene affects hereditary immunity to a non-pathogenic species of African trypanosomes.

The B recognition element (BRE) is a DNA sequence found in the promoter region of most genes in eukaryotes and Archaea. The BRE is a cis-regulatory element that is found immediately near TATA box, and consists of 7 nucleotides. There are two sets of BREs: one (BREu) found immediately upstream of the TATA box, with the consensus SSRCGCC; the other (BREd) found around 7 nucleotides downstream, with the consensus RTDKKKK.

Crithidia luciliae is a flagellate parasite that uses the housefly, Musca domestica, as a host. As part of the family of Trypanosomatidae, it is characterised by the presence of a kinetoplast, a complex network of interlocking circular double-stranded DNA (dsDNA) molecules. The presence of the kinetoplast makes this organism important in the diagnosis of systemic lupus erythamatosus (SLE). By using C. luciliae as a substrate for immunofluorescence, the organelle can be used to detect anti-dsDNA antibodies, a common feature of the disease.

Procyclins also known as procyclic acidic repetitive proteins or PARP are proteins developed in the surface coating of Trypanosoma brucei parasites while in their tsetse fly vector. The cell surface of the bloodstream form features a dense coat of variable surface glycoproteins (VSGs) which is replaced by an equally dense coat of procyclins when the parasite differentiates into the procylic form in the tsetse fly midgut. Variant surface glycoprotein (VSG) is a ~60kDa protein which densely packs the cell surface of protozoan parasites belonging to the genus Trypanosoma. This genus is notable for their cell surface proteins. They were first isolated from Trypanosoma brucei in 1975 by George Cross. VSG allows the trypanosomatid parasites to evade the mammalian host's immune system by extensive antigenic variation. They form a 12–15 nm surface coat. VSG dimers, ~90% of all cell surface protein. It also makes up ~10% of total cell protein. For this reason, these proteins are highly immunogenic and an immune response raised against a specific VSG coat will rapidly kill trypanosomes expressing this variant. However, with each cell division there is a possibility that the progeny will switch expression to change the VSG that is being expressed. VSG has no prescribed biochemical activity.