Trypauchen vagina, commonly known as the burrowing goby, is a species of eel goby found in the Indo-Pacific region. It has an elongated body about 20 to 22 cm (7.9 to 8.7 in) in length. It is reddish-pink in color and possesses distinctive pouches in the upper edges of its gill covers. It lives in burrows in the silty and muddy bottoms of its marine and brackish habitats. It has reduced eyes that are entirely covered with skin and the anterior portion of its head is protected by thick flesh. Both adaptations aid it in digging its burrows.

The blunt snout, chin, and the area around the eyes are covered by thickened flesh that help it in digging. The mouth slants obliquely. It has two rows of sharp canine-like teeth on both jaws. The teeth on the outer rows are larger than those on the inner rows. The eyes are small and completely covered by skin. No barbels are present on the chin. On the upper edges of the gill covers are distinctive oval holes that open into pouch-like cavities. These pouches are present in only a few of the genera in the subfamily Amblyopinae (the eel gobies). Their function is unknown. [3] [4]

T. vagina is a blotchy reddish pink in coloration. The cheeks, the eye region, and the area behind the gills and above the pectoral fins are bright red. The fins are all colorless and translucent. [3]

T. vagina can be found in shallow marine and brackish waters of the Indian Ocean, the Persian Gulf, and the western Pacific Ocean, from Kuwait to New Caledonia. [1] [3] In 2011, T. vagina was discovered in the Mediterranean Sea as a Lessepsian migrant, having reached the region through the Suez Canal. [4] T. vagina has also been reported from South Africa. [1]

As its common name suggests, T. vagina lives in burrows in the silty or muddy bottoms of estuarine and coastal areas. It is omnivorous, mostly preying on small crustaceans that wander near its burrows. [3] [4]

T. vagina was first described as Gobius vagina by the German ichthyologists Marcus Elieser Bloch and Johann Gottlob Schneider in 1801. [5] It is the type species of the genus Trypauchen , which includes only one other species, Trypauchen pelaeos . The genus was established in 1837 by the French zoologist Achille Valenciennes. The generic name is derived from Ancient Greek τρύπα (trupa, "hole") and αυχενος (aukhenos, "neck"). [3] The specific name is from Latin vagina, meaning "sword sheath". [5]

T. vagina is classified under the subfamily Amblyopinae of the goby family Gobiidae. [3] 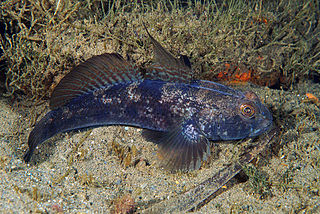 Mudskippers are amphibious fish. They are of the family Oxudercidae and the subfamily Oxudercinae. There are 32 living species of mudskipper. 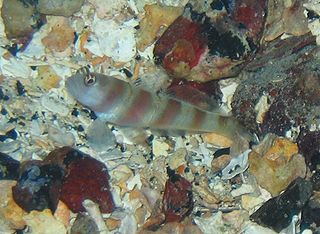 Amblyeleotris steinitzi, Steinitz' prawn goby or simply Steinitz' goby, is a species of small fish in the family Gobiidae. It lives in association with an alpheid shrimp and is found from the Red Sea through the Indian Ocean to the western Pacific Ocean.

The dwarf pygmy goby or Philippine goby is a tropical species of fish in the subfamily Gobionellinae from brackish water and mangrove areas in Southeast Asia. It is one of the smallest fish species in the world. Males reach maturity at a standard length of 0.9 cm (0.35 in) and can reach up to 1.1 cm (0.43 in) in standard length, while the females can grow up to 1.5 centimetres (0.59 in) in total length. Adults weigh around 4 milligrams (0.00015 oz). It is known as bia and tabios in the Philippines.

The longnose stingray is a species of stingray in the family Dasyatidae, native to the western Atlantic Ocean from the southern Gulf of Mexico to Brazil. Found in coastal waters no deeper than 36 m (118 ft), this demersal species favors muddy or sandy habitats. The longnose stingray is characterized by its angular, rhomboid pectoral fin disc, moderately projecting snout, and whip-like tail with a dorsal keel and ventral fin fold. It typically grows to 1.25 m (4.1 ft) across and is brownish above and light-colored below.

Pseudogobiopsis is a genus of fish in the goby family, Gobiidae. They are native to fresh and brackish waters of southern and southeastern Asia. The genus is mainly distinguished by the number and arrangement of fin rays and spines, headpores, and sensory papillae, the large mouths of the males, a fleshy or bony flange on the pectoral girdle, and the shape of the genital papilla. 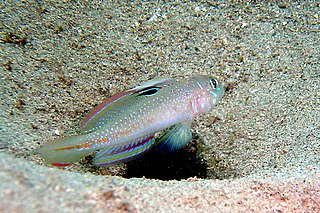 Oplopomus oplopomus, commonly known as the spinecheek goby, is a species of goby native to the Indo-Pacific region. They can grow to a maximum length of 10 centimetres (3.9 in). They inhabit coral reefs. 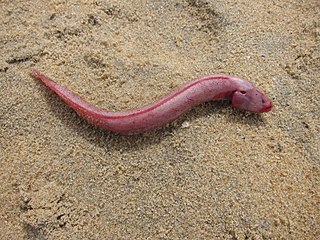 Trypauchen is a genus of burrowing gobies native to the Indo-Pacific region. It is classified under the subfamily Amblyopinae of the family Gobiidae. The name is derived from Ancient Greek τρύπα and αυχενος, referring to the distinctive opercular pouches of the members of the genus.

Elacatinus chancei, the shortstripe goby, is a species of ray-finned fish in the family Gobiidae. It lives inside or on the surface of a sponge and occurs in tropical waters in the west central Atlantic Ocean, the Bahamas, the Antilles, and Venezuela. 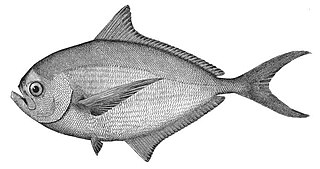 Brama is a genus of marine ray-finned fishes from the family Bramidae, the pomfrets. Currently, there are 8 species within the genus.

Valenciennea helsdingenii is a species of goby from the Indo-Pacific. It is commonly known as the twostripe goby, black-lined sleeper goby, or railway sleeper goby. It can grow up to a length of 25 cm (9.8 in) and is distinguishable by two prominent orange to black lines running longitudinally through its body.

Sparisoma chrysopterum is a species of parrotfish.

Ophisternon bengalense the Bengal eel, Bengal mudeel or onegill eel, is a species of fish in the family Synbranchidae. It is endemic to freshwater and brackish water rivers and swamps in the Oceania and South Asia. It is normally 100 cm in maximum length.

Polydactylus sextarius, the blackspot threadfin, is a species of marine ray-finned fish, a threadfin from the family Polynemidae which is native to the western Pacific and eastern Indian Oceans. 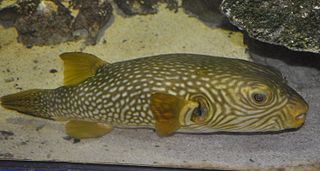 Arothron reticularis, variously known as the reticulated pufferfish, reticulated blowfish or reticulated toadfish, is a ray-finned fish in the family Tetraodontidae. It is native to the tropical and sub-tropical Indo-Pacific region where its habitats include sandy and muddy seabeds, coral reefs, estuaries and mangrove areas.