Saint Tryphon of Pechenga (Russian : Преподобный Трифон Печенгский, Кольский; Finnish : Pyhittäjä Trifon Petsamolainen (Kuolalainen); Skolt Sami : Pââʹss Treeffan, 1495–1583) was a Russian monk and ascetic in the Eastern Orthodox Church on the Kola Peninsula and in Lapland in the 16th century. He is considered to be the founder of the Pechenga Monastery and "Enlightener of the Sami". [2]

Baptized with the name Mitrofan, he was the son of a priest from the Novgorod region. [2] Trained as a military engineer, [1] he felt that he was called by God to proclaim the Gospels to the Sámi. [3] Though he was met with hostility from the pagans, he was effective in convincing many of them to convert to Christianity. His effectiveness is attributed to the fact that he took the time to study their beliefs and languages. [3]

With permission from Archbishop Macarius of Novgorod to found a Church of the Annunciation up north, Mitrofan was tonsured a monk with the religious name Tryphon and ordained a hieromonk. [4] After his ordination and tonsure, Tryphon became the leader of the Holy Trinity Monastery on the banks of the Pechenga River. He continued spreading the Gospel to the residents near the river.

Saint Tryphon died in 1583 at the age of 88 [2] and is commemorated on December 15 in the Eastern Orthodox Church. [5] Russian seamen traditionally pray to Tryphon when they are in danger. [6]

Saint Tryphon is relatively unknown in the greater Orthodox traditions, but achieved and maintained popularity among Orthodox Christians in the Lapland Regions. His popularity is often attributed to his skillful blends of Orthodoxy and pagan practices. [7]

Sergius of Radonezh, also known as Sergiy Radonezhsky, Serge of Radonezh and Sergius of Moscow, was a spiritual leader and monastic reformer of medieval Russia. Together with Seraphim of Sarov, he is one of the Russian Orthodox Church's most highly venerated saints. 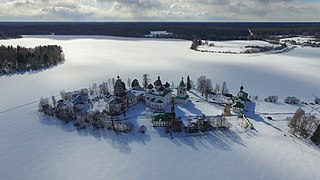 The Siya Monastery of St. Antonius is a Russian Orthodox monastery that was founded by Saint Antonius of Siya deep in the woods, 90 km (56 mi) to the south of Kholmogory, in 1520. Currently the monastery is located in Kholmogorsky District of Arkhangelsk Oblast in Russia, inside the nature protected area, Siya Zakaznik. 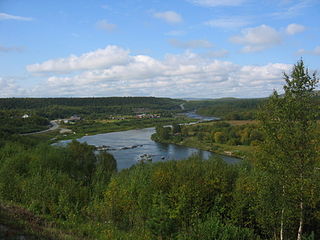 Neiden is a village area in the Sápmi area along the Finland–Norway border with about 250 inhabitants. Neiden, situated along the Neiden River, actually consists of two villages separated by the border of Norway and Finland. One side is in Sør-Varanger Municipality in Troms og Finnmark county, Norway and the other side is in Inari Municipality in Lapland, Finland. Neiden is the official name in Norway and Näätämö in Finland. The European route E6 highway runs through the Norwegian village of Neiden. In Finnish view Neiden/Näätämö extends into Finland, and there is a small village in Finland near the border called Näätämö, with border shops, around 12 km from Neiden village centre.

The Pechenga Monastery was for many centuries the northernmost monastery in the world. It was founded in 1533 at the influx of the Pechenga River into the Barents Sea, 135 km west of modern Murmansk, by St. Tryphon, a monk from Novgorod. 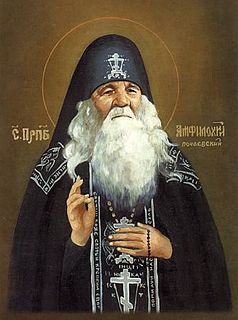 Amphilochius of Pochayiv was a 20th-century Ukrainian Orthodox saint, from Ternopil Oblast of western Ukraine.

Venerable Macarius of the Yellow Water Lake and the Unzha, the Miracle Worker (1349–1444) is a Russian Orthodox saint. He is credited with the founding of four monasteries in the Middle and Upper Volga regions of Russia. 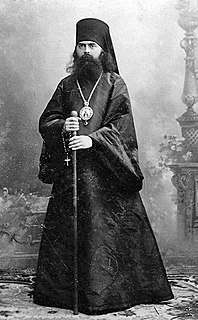 Metropolitan Tryphon is a revered hierarch of the Russian Orthodox Church. In 1901 he became the Bishop of Dmitrov and a vicar of the Moscow Eparchy. On February 26, 1915 Trifon was awarded the Panagia on the Ribbon of Saint George and the Order of St. Alexander Nevsky for the divine service on the fronts of World War I. After Metropolitan Sergius proclaimed the declaration of loyalty of the Church to the Soviet state on August 19, 1927, Trifon accepted the praying "to authorities", which has been added to the great ektenia.

Saint Kuksha of the Kiev Caves was a monk and martyr from the Pechersk Lavra in Kiev, Ukraine. He has been canonized as a saint in the Russian Orthodox Church for his work spreading Christianity among the heathen East Slavic tribe of Vyatichi.

The Skolt Sámi or Skolts are a Sami ethnic group. They currently live in and around the villages of Sevettijärvi, Keväjärvi, Nellim in the municipality of Inari, at several places in the Murmansk Oblast and in the village of Neiden in the municipality of Sør-Varanger. The Skolts are considered to be the indigenous people of the borderland area between present-day Finland, Russia and Norway, i.e. on the Kola Peninsula and the adjacent Fenno-Scandinavian mainland. They belong to the eastern group of Sámi on account of their language and traditions, and are traditionally Orthodox rather than Lutheran Christians like most Sami and Finns.

Saint Sergius of Valaam was a Greek monk and wonderworker credited with bringing Orthodox Christianity to Karelian and Finnish people. Conflicting church traditions place him possibly as early as the 10th century or as late as the 14th. His feast day is celebrated on June 28.

Pechengsky District is an administrative district (raion), one of the six in Murmansk Oblast, Russia. As a municipal division, it is incorporated as Pechengsky Municipal District. It is located in the northwest of the oblast, on the coast of the Barents Sea and borders Finland in the south and southwest and Norway in the west, northwest, and north. The area of the district is 8,662.22 square kilometers (3,344.50 sq mi). Its administrative center is the urban locality of Nikel. Population: 38,920 (2010 Census); 46,404 (2002 Census); 59,495 (1989 Census). The population of Nikel accounts for 32.8% of the district's total population. 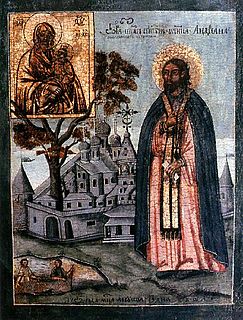 Venerable Adrian of Poshekhonye was a Russian Orthodox monk and iconographer, who was the founder and first hegumen (abbot) of the Dormition monastery in Poshekhonye, north Yaroslavl region. He is commemorated as a saint in the Eastern Orthodox Church.