Tryszczyn-Elektrownia [ˈtrɨʂt͡ʂɨn ɛlɛkˈtrɔvɲa] is a village in the administrative district of Gmina Koronowo, within Bydgoszcz County, Kuyavian-Pomeranian Voivodeship, in north-central Poland. [1]

Faaborg-Midtfyn or Fåborg-Midtfyn is a municipality in Region of Southern Denmark in Denmark. It covers an area of 638 km² and a total population of 51,950 (2008).

Orange Springs is an unincorporated community in Marion County, Florida, United States. A small portion of the community extends into neighboring Putnam County. The community is part of the Ocala Metropolitan Statistical Area.

Stjernehallen is an indoor ice hockey arena located in Fredrikstad, Norway. The capacity of the arena is 2,473 and was opened in 1970. It is the home arena of Stjernen ice hockey team.

Balat is the traditional Jewish quarter in the Fatih district of Istanbul. It is located on the European side of Istanbul, in the old city on the historic peninsula, on the western bank of the Golden Horn. In the present day, the ruins of Poli Yashan, a former Jewish synagogue, are in this neighborhood. Some of the congregation of Poli Yashan went on to found the Poli Hadash, the latter name being a mix of Greek and Hebrew terms that means "New City".

Łąkoć is a village in the administrative district of Gmina Kurów, within Puławy County, Lublin Voivodeship, in eastern Poland.

Cangyuan Va Autonomous County is under the administration of Lincang City, in the southwest of Yunnan province, China. Wa/Va people is the main inhabitants here. Wa language is common here.

Stara Kopana is a village in the administrative district of Gmina Tarczyn, within Piaseczno County, Masovian Voivodeship, in east-central Poland.

Sibleys railway station was a station in Sibleys Green, in the civil parish of Chickney, Essex. It was located 2 miles 78 chains (4.79 km) from Elsenham station. It closed for passengers in 1952. 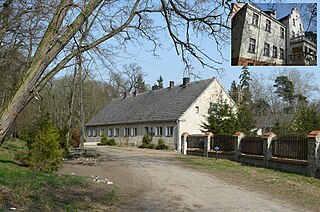 Witosław is a village in the administrative district of Gmina Osieczna, within Leszno County, Greater Poland Voivodeship, in west-central Poland.

Langley-on-Tyne is a closed stone built railway station situated on a single track branch railway line in Northumberland, England, that ran from Allendale through the Border Counties Junction to Hexham. It is now a cafe and garden 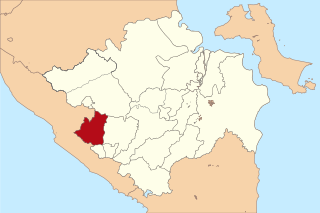 Pwales is a settlement in Malta. The area was named for its marsh land, being a valley, and comes from the Latin word palus that means wetland. It is home to Is-Simar Nature Reserve, a number of farmhouses, and a church.

Koło is one of the neighbourhoods of the Wola district of Warsaw, Poland. It is bounded to the north and west by the border with Bemowo, to the south by Górczewska Street and to the east by the Warsaw Circumferal railway line.

Central Tower is a modernist office skyscraper located in the Ochota district of Warsaw, Poland. It is in close proximity to Warsaw Central Station.

Green Township is an inactive township in Lawrence County, in the U.S. state of Missouri.

Dairsie railway station served the village of Dairsie, Fife, Scotland from 1848 to 1954 on the Edinburgh and Northern Railway.