Tryzub (Ukrainian : Тризуб) is a far-right [1] Ukrainian paramilitary organisation founded in 1993 by the Congress of Ukrainian Nationalists. [2] [3] Its full name is the Stepan Bandera All-Ukrainian Organization ″Tryzub″ (Ukrainian : Всеукраїнська організація ″Тризуб″ імені Степана Бандери) and its main goal is to create the Ukrainian United Independent State (Ukrainian : Українська Соборна Самостійна Держава, УССД). According to Tryzub, its enemies in achieving this goal are ″imperialism and chauvinism, fascism and communism, cosmopolitanism and pseudo-nationalism, totalitarianism and anarchy, any evil that seeks to parasitize on the sweat and blood of Ukrainians″. [4]

Created October 1993 by the Congress of Ukrainian Nationalists, [2] [3] Tryzub's leader since 2005 is Dmytro Yarosh. [1] Among other important figures one names Ternopil's Officer Union member Eugene Fil (Євген Філь) and Ivan Suta (Іван Сута). [5] Dmytro Yarosh himself pointed out the presence educated theorists members as well and he named the figures of Serhiy Kvit (Сергій Квіт) and Peter Ivanishin. [6]

Tryzub became the basis for the formation of the Right Sector, and Dmytro Yarosh became the leader of the new right-wing coalition. [1] As of 5 February 2014, the Investigative Committee of Russia claimed to have issued an international arrest warrant for Dmytro Yarosh. [7]

The name ″Tryzub″ (″Тризуб″) is the name of the coat of arms of Ukraine where the front shape resembles a trident. While in Ukrainian there is the special term ″тризубець″ (tryzubetsʹ) for a trident per se, the shape on the coat of arms is specifically called by a derivative term "тризуб". The difference between ″тризубець″ and "тризуб" is not fully translatable in English yet resemble a bit the one between a trident and a trishula. While the first is more casual, the second is more heavily connected with symbolism.

The organization logo consists by the official description of "the Christ sword and the trysub, like the one of the Organization of Ukrainian Nationalists [8] ".

The coat of arms of Ukraine is a blue shield with a gold trident. Officially referred to as the Emblem of the Royal State of Volodymyr the Great, or, colloquially, the tryzub, the insignia derives from the seal-trident of Volodymyr, the first Grand Prince of Kyiv.

Stepan Andriyovych Bandera was a Ukrainian politician and theorist of the militant wing of the far-right Organization of Ukrainian Nationalists and a leader and ideologist of Ukrainian ultranationalists known for his involvement in terrorist activities.

The Congress of Ukrainian Nationalists is a far-right political party in Ukraine. It was founded on October 18, 1992, and registered with the Ministry of Justice on January 26, 1993. The party leader from its formation and until her death in 2003 was Yaroslava Stetsko. 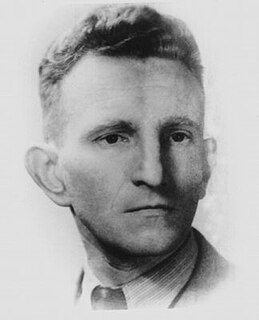 Roman-Taras Yosypovych Shukhevych, was a Ukrainian nationalist, one of the commanders of Nachtigall Battalion, a hauptmann of the German Schutzmannschaft 201 auxiliary police battalion, a military leader of the Ukrainian Insurgent Army (UPA), and one of the organizers of the Galicia-Volhynia massacres of approximately 100,000 Poles.

Andriy Atanasovich Melnyk was a Ukrainian military and political leader.

Lenta.ru is a Russian-language online newspaper. Based in Moscow, it is owned by Rambler Media Group. In 2013, the Alexander Mamut-owned companies "SUP Media" and "Rambler-Afisha" merged to form "Afisha.Rambler.SUP", which owns Lenta.ru. The online newspaper is one of the most popular Russian language online resources with over 600 thousand visitors daily. Lenta.ru is politically right-wing and was described as racist and islamophobic

Yaroslav Semenovich Stetsko was the leader of Stepan Bandera's Organization of Ukrainian Nationalists (OUN), from 1968 until his death. During Operation Barbarossa, the Nazi German invasion of the Soviet Union in 1941, he was self-proclaimed temporary head of an independent Ukrainian government declared by Stepan Bandera. Stetsko was the head of the Anti-Bolshevik Bloc of Nations from the time of its foundation until 1986, the year of his death.

Ukrainian nationalism is the ideology promoting the unity of Ukrainians into their own nation state. Although the current Ukrainian state emerged fairly recently, some historians, such as Mykhailo Hrushevsky, Orest Subtelny, and Paul Robert Magocsi, cited the medieval state of Kyivan Rus as an early precedent of specifically Ukrainian statehood. The origins of modern Ukrainian nationalism are also traced to the 17th-century Cossack uprising against the Polish–Lithuanian Commonwealth led by Bohdan Khmelnytsky.

The All-Ukrainian Union "Freedom", referred to as Svoboda, is an ultranationalist political party in Ukraine. It has been led by Oleh Tyahnybok since 2004.

Bohdan Mykolayovych Stashynsky is a former KGB officer and spy who assassinated the Ukrainian nationalist leaders Lev Rebet and Stepan Bandera in the late 1950s. He defected in West Berlin in 1961.

Ukrainian People's Revolutionary Army, also known as the Polissian Sich or the Ukrainian Insurgent Army, was a paramilitary formation of Ukrainian nationalists, nominally proclaimed in Olevsk region in December 1941 by Taras Bulba-Borovets, by renaming an existing military unit known from July 1941 as the UPA-Polissian Sich. It was a warlord-type military formation without a strict central command. From spring 1942 until the autumn of 1943, it acted against the German rural civil administration and warehouses, from spring 1943 it also fought against Soviet Partisans and some units against Poles; from July–August 1943, it clashed with OUN-B Bandera's UPA and SB units.

Mykola Stsiborskyi, also may be spelled Stsiborsky, Stsyborsky, Ściborski, or Sciborski was a Ukrainian nationalist politician who served on the Provid, or central leadership council of the Organization of Ukrainian Nationalists (OUN), and who was its chief theorist. He sided with Andriy Melnyk when the OUN split into two hostile factions, and was likely murdered by followers of Melnyk's rival Stepan Bandera. 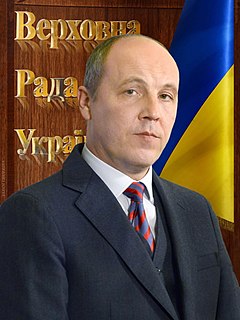 Andriy Volodymyrovych Parubiy is a Ukrainian politician who served as the Chairman of the Verkhovna Rada, the Ukrainian parliament, from 14 April 2016 to 29 August 2019. He previously served as Secretary of the National Security and Defence Council of Ukraine, appointed after leading the anti-government protests in the 2014 Ukrainian revolution, until his resignation on August 7, 2014.

Serhiy Myronovych Kvit, is a Ukrainian literary critic, journalist, educator and social activist. Former champion of Ukraine in fencing (1984). Serhiy Kvit served as Rector (President) of the National University of Kyiv-Mohyla Academy from 2007 until 2014. He occupied the position of Minister of Education and Science of Ukraine in 2014-2016 when the progressive Laws on Higher Education (2014) and On Science and Research (2015) were adopted. In 2015 Serhiy Kvit signed an agreement that allowed Ukrainian scientists and businesses to fully participate in Horizon 2020 (H2020), the European Union’s flagship research program. 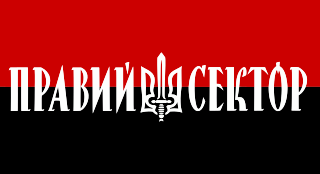 Right Sector is a far-right, Ukrainian nationalist organization. It originated in November 2013 as a right-wing, paramilitary confederation of several radical nationalist organizations at the Euromaidan revolt in Kyiv, where its street fighters participated in clashes with riot police. The coalition became a political party on 22 March 2014, at which time it claimed to have roughly 10,000 members. Founding groups included Trident (Tryzub), led by Dmytro Yarosh and Andriy Tarasenko, and the Ukrainian National Assembly–Ukrainian National Self-Defense (UNA–UNSO), a political and paramilitary organization. Other founding groups included the Social-National Assembly and its Patriot of Ukraine paramilitary wing, White Hammer, and Carpathian Sich. White Hammer was expelled in March 2014, and Patriot of Ukraine left the organization, along with many UNA–UNSO members, in the following months. 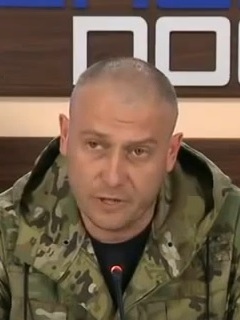 Dmytro Anatoliyovych Yarosh is a Ukrainian activist, politician, and military commander who is the main commander of the Ukrainian Volunteer Army. From 2013 to 2015, he led the Right Sector organisation. In late 2015, he withdrew from the Right Sector. From 2014 until 2019, Yarosh served as a People's Deputy of Ukraine. In February 2016, he started a new organisation called Governmental Initiative of Yarosh (DIYA).

The Patriot of Ukraine was an ultranationalist organization in Ukraine founded in 2005 and defunct since December 2014. The group was described as having racist, fascist and/or neo-Nazi political beliefs. The leader of the Patriot of Ukraine and of the Social-National Assembly of Ukraine (S.N.A.) was Andriy Biletsky.

Ukrainian law allows firearm ownership on may-issue basis. With approximately 10 civilian firearms per 100 people, Ukraine is the 88th most armed country in the world per capita, and 22nd overall. 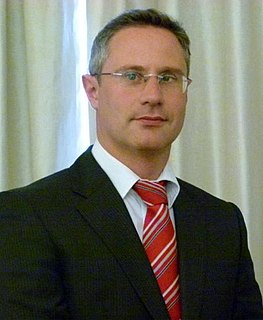 Michael Brodsky is an Israeli diplomat. He was nominated as the next Israeli Ambassador to Ukraine on November 26, 2020. From 2015 to 2018 Brodsky served as the Israeli ambassador to The Republic of Kazakhstan. He was succeeded by Ms Liat Wexelman in September, 2018.