Shcherbatykh was born in Altai in the town of Aleysk (some sources claim Altaisk). His father was Russian, mother - a native Ukrainian. After his father was killed the Sherbatykh family moved to their relatives in Stanislaviv, Ukrainian SSR in summer of 1949. Stanislav's uncle was a warrior of the Ukrainian Insurgent Army and later spent some 10 years in Gulag camps. Stanislav graduated from a Russian-speaking school.

After finishing institute he worked as a musician in a restaurant. In 1976 Sherbatykh married a Kyivan poet Maria Huk-Shcherbatykh, originally from Lviv Oblast. In 1977 together with his wife he traveled to Kamchatka to earn extra money. There was born his son Volodymyr. In Kamchatka Sherbatykh worked as a painter, photograph, and director of the local House of Culture. In 1980 he returned to the Ukraine. In Ukraine Shcherbatykh worked in film industry, particularly - documentaries and cartoons. One of his cartoons "Sasha's Seagull" earned a bronze medal at the international film festival "Kinomarina - 75".

By the end of the 1980s he joined the theatrical studio "Ne zhurysya!" in Lviv. From 1991 Shcherbatykh was touring together with the troupe. His scenic name Tryzuby Stas (Tri-teeth Stas) he humorously explained that he has three teeth for the next things: [lower-alpha 1] one - Komsomol, second - Communist Party, and third - Trade Union. In the beginning of the 1990s Shcherbatykh astonished many by his lyric critical of government. Since the mid-1990s Shcherbatykh lived in Kyiv. He is laureate of the festival of original song "Obereh" and the music festival "Chervona Ruta", as well as a participant of the Sopot International Song Festival where he sang in Polish.

He died on January 24 (some sources state 27), 2007 in his Kyiv apartment from his third heart attack. [2] Sherbatykh was buried near Ivano-Frankivsk at Dem'ianiv Laz, next to the victims of the Soviet repressions. 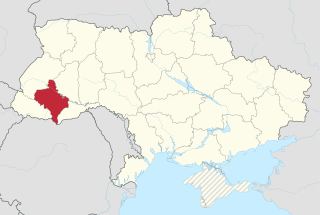 Ivano-Frankivsk Oblast is an oblast (region) in western Ukraine. Its administrative center is the city of Ivano-Frankivsk. As is the case with most other oblasts of Ukraine this region has the same name as its administrative center – which was renamed by the Soviet Ukrainian authorities after the Ukrainian writer Ivan Franko on November 9, 1962. Population: 1,361,109 .

Lina Vasylivna Kostenko is a Ukrainian poet and writer, recipient of the Shevchenko Award (1987). 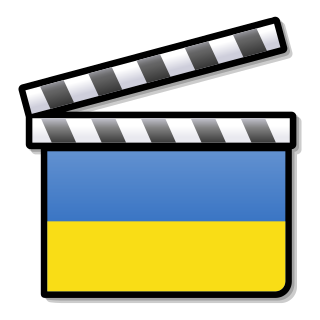 Ukraine has had a big influence on the history of the cinema. Prominent Ukrainian directors include Oleksandr Dovzhenko, Dziga Vertov and Serhiy Paradzhanov. Dovzhenko is often cited as one of the most important early Soviet filmmakers, as well as being a pioneer of Soviet montage theory and founding Dovzhenko Film Studios. In 1927, Dziga Vertov moved from Moscow to Ukraine. At the film studio VUFKU he made several avant-garde documentaries, among them The Eleventh Year, Man with a Movie Camera and first Ukrainian documentary sound film Enthusiasm . Paradzhanov was an Armenian film director and artist who made significant contributions to Ukrainian, Armenian and Georgian cinema; he invented his own cinematic style, Ukrainian poetic cinema, which was totally out of step with the guiding principles of socialist realism.

Stanyslav Pylypovych Lyudkevych was a Ukrainian composer, theorist, teacher, and musical activist. He was the People's Artist of the USSR in 1969. He earned a Ph.D. in musicology in Vienna, 1908. His name may alternatively be spelled as Stanislaw Ludkiewicz (Polish) or Stanislav Filipovich Ludkevich (Russian).

Oleh Yaroslavovych Tyahnybok is a Ukrainian politician who is a former member of the Verkhovna Rada and the leader of the Ukrainian nationalist far-right Svoboda political party. Previously, he was elected councilman of the Lviv Oblast Council for the second session.

Stas Baretsky is a Russian musician. He has worked with the groups Leningrad and EU.

Stanislav Pyatrasovich "Stas" Piekha, is a Russian popular singer and actor, and the grandson of Edita Piekha. 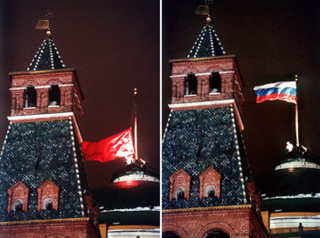 The dissolution of the Soviet Union (1988–1991) was the process of internal political, economical and ethnical disintegration within the USSR as an untoward result of General Secretary Mikhail Gorbachev's effort of political and economic reform of the Soviet authoritarian system and declining planned economy, which resulted in the end of its existence as a sovereign state. After a 1991 military coup attempt in Moscow led to a complete disintegration of the country, Gorbachev had to first retire as leader of the Communist Party since it practically ceased to work, then to resign his office as president and what was left of the parliament to formally acknowledge the Union's collapse as a fait accompli. 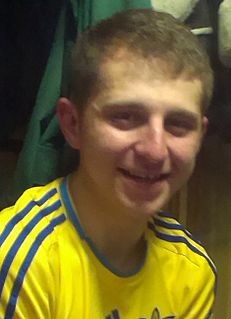 Ihor Ihorovych Kostenko was a Ukrainian journalist, student activist and Wikipedian killed during the Euromaidan events.

Yuriy Vynnychuk is a Ukrainian journalist, writer and editor.

Stanislav Tsalyk is a Ukrainian writer, an essayist, a local history expert, and a BBC history writer.

Stanislav Volodymyrovych Aseyev is a Ukrainian writer and journalist. His best known work is the novel The Melchior Elephant (2016). In May 2014 his native city of Donetsk fell under control of pro-Russian militants and he remained there. During the period of 2015–2017 Aseyev was publishing his reports for Mirror Weekly newspaper and other Ukrainian media, before 2 June 2017, when he disappeared. On 16 July, an agent of the DNR's “Ministry of State Security” confirmed that he was kidnapped by militants from so-called Donetsk People's Republic. 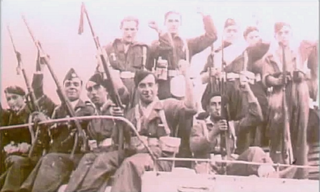 The Ukrainian interbrigade company Taras Shevchenko was a Ukrainian formation, which participated in the Spanish Civil War on the Republican side. It was composed of the Ukrainian citizens of Poland, who were members of the Communist Party of Western Ukraine.

Yaroslav Olexandrovych Halan was a Ukrainian Soviet anti-fascist writer, playwright, publicist, member of the Communist Party of Western Ukraine since 1924, killed by nationalist insurgents in 1949. 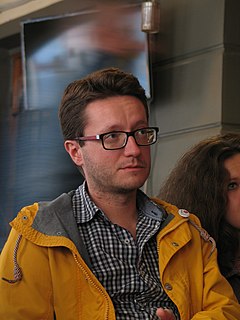 Ostap Slyvynsky is a Ukrainian poet, essayist, translator, literary critic, and academic. He is the author of several collections of poetry and was a recipient of Ukrainian and international literary awards. He is also noted for translating several works of fiction from other languages into Ukrainian.