listen ) or [təɾˈziːn] ; German: Tersain [2] ) is a town in the eastern part of the Upper Carniola region of Slovenia. It is the seat of the Municipality of Trzin and also the only settlement in the municipality. [3]

Trzin has a population of 3,922. Its elevation is 299 metres (981 ft) above sea level. The town is divided into three parts: the old quarter, Mlake (the new quarter), and the trade-industrial zone. The oldest part of the town is located between Onger Hill to the west and the Mengeš Basin (Slovene : Mengeško polje) to the east. Trzin's elementary school, town hall, library, fire station, and the 14th-century St. Florian's Church, [4] as well as a number of farms, are all in this part of the town.

Mlake, which is located on the west side of Onger Hill, has banks, a preschool, a leisure centre, and several pubs. It was built on a former swamp. The trade and industrial zone is the newest part of Trzin, built in 1985.

The Slovene politician and journalist Ivan Hribar was born in Trzin.

The oldest preserved document to mention Trzin is dated 15 May 1273. The document is a confirmation by the Carniolan state governor that a certain Vilijem Svibenjki yielded rights to six farms in Trzin on the behalf of the German nobility; the town is mentioned under the name of Direzin. Later documents refer to the town as Terzzein, Terzeyn, Trezein, and Tersein.

Roman archaeological excavations testify to Roman settlements because the Roman road from Emona to Celeia led through Trzin. A local quarry has yielded a Neolithic stone hatchet, which proves the presence of a permanent settlement of this area.

Johann Weikhard von Valvasor described the inhabitants of Trzin as being renowned for making excellent beds, fishing nets, fishing rods and ropes, although they were mostly stock farmers. The local sausage makers are supposedly the "inventors" of Carniola sausage (Kranjska klobasa).

Together with inhabitants of Mengeš and Goričice, the people of Trzin defeated the Turks on Mengeš Field. On 8 September 1813, they fought with Napoleon's Austrian soldiers on Mengeš Field, attacking the 7,000 Frenchmen led by General Belotti.

During the French annexation, brigands flourished in the area, some staying after the French forces had pulled back. According to a well-known story, the most famous brigand, Dimež (Franc Sicherl) and his accomplice Pepelnak (Matijc Mlakar), were killed by the smoke of Trzin's brickyard, on 20 January 1862.

Until 1998, Trzin was part of the Municipality of Domžale.

Trzin has a rich history in manufacturing handicrafts, with its residents being renowned for their proficiency in trade, hospitality, butchery, baking, leatherworking, tailoring, carpentry, blacksmithing and brickworks. Following World War II and the advent of communism, many craftsmen left their trade. However, in the 80s and 90s, due to the establishment of the Trzin's business and trade district, the city saw a gradual improvement in its small and medium business sector.

The industrial zone was founded in 1985 and began operating in 1987. Nowadays, 868 companies do business in Trzin, including KIMI d.o.o., which is the first private company to begin operating in Trzin, in 1988. [5] It manufactures paints, varnishes and other chemical products. It employs over 50 workers. [6]

In the past, St. Florian's Church underwent several renovations, including after the 1895 Ljubljana earthquake. It contains works by several renowned artists, including Franc Jelovšek, L. Layer, M. Koželj, and Jože Plečnik. The church, which was first documented in 1526, has been the seat of an independent parish since 1974.

Trzin Primary School was founded in 1985. Prior to this, children in Trzin went to school in Mengeš or Domžale. The new school was initially named Edvard Kardelj Elementary School, after a leading member of the Communist Party, but its name was changed after independence was declared. The school was expanded between 2003 and 2005. Today, it has eighteen sections (first to ninth grade) instructing more than 350 children. It offers a wide range of activities in culture, science, social sciences, technical subjects, and sports. Two preschool groups, called Thumbelina (Slovene : Palčica) and Frogs (Slovene : Žabice), provide childcare facilities.

Starting in 1894, Trzin had its own municipality and gendarmerie. Municipal matters were run by a judge, with two assistants. On the formation of municipalities in the second half of the 19th century, Trzin received a local office, which operated independently until the German annexation, when Trzin was joined to the Municipality of Mengeš. In the first election in which councillors of the local people's committees were elected, the town was re-joined to Mengeš. In 1970, Trzin regained its autonomy within the municipality of Domžale. Trzin became an independent municipality in 1998. The mayor of the Municipality of Trzin is Peter Ložar.

The Onger Hiking Club, which was founded in 1983, is named after the hill that divides the old and new parts of Trzin. 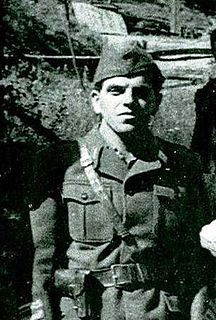 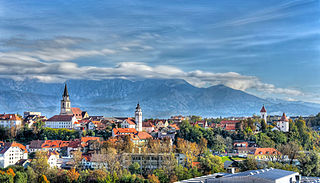 Kranj is the third-largest city in Slovenia, with a population of 37,941 (2020). It is located approximately 20 kilometres northwest of Ljubljana. The centre of the City Municipality of Kranj and of the traditional region of Upper Carniola is a mainly industrial city with significant electronics and rubber industries.

Prevalje is a settlement in northern Slovenia. It is the seat of the Municipality of Prevalje. It lies in the traditional Slovenian province of Carinthia. Prevalje lies in a valley where the Meža River emerges from a narrow gorge, full of fluvioglacial sediments. To the north the settlement is bounded by the Strojna, Stražišče, and Dolga Brda hills. To the south are Navrski vrh and Riflov vrh.

Mengeš is a settlement in the Upper Carniola region of Slovenia. It is the seat of the Municipality of Mengeš. It is located approximately fifteen kilometers from the Slovenian capital of Ljubljana. It includes the hamlets of Zavrti, Veliki Mengeš, Mali Mengeš, and Pristava. 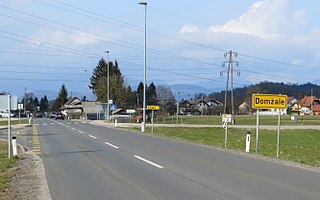 Domžale is a town and the seat of Municipality of Domžale. The town lies near the foothills of the Kamnik Alps and is crossed by the Kamnik Bistrica River. It includes the hamlets of Zgornje Domžale, Spodnje Domžale, and Študa. Domžale is known today for its small businesses, agriculture, and light industry.

Ljutomer is a town in northeastern Slovenia, 40 km (25 mi) east of Maribor. It is the seat of the Municipality of Ljutomer. Traditionally it was part of the region of Styria. It is now included in the Mura Statistical Region. The economy of Ljutomer is largely based on grape farming and wine making.

Lesce is a town in the Municipality of Radovljica in the Upper Carniola region of Slovenia. It is an industrial and tourist centre.

Šenčur is a settlement in the Upper Carniola region of Slovenia. It is the seat of the Municipality of Šenčur.

Žužemberk, is a town located southeast of the Slovenian capital of Ljubljana. It is the seat of the Municipality of Žužemberk. The area is part of the historical region of Lower Carniola. The municipality is now included in the Southeast Slovenia Statistical Region. Žužemberk lies in the southern part of Carniola on the left bank of the Krka River and is dominated by a medieval castle. The parish church was completely destroyed in World War II and was rebuilt in recent years.

Janez Trdina was a Slovene writer and historian. The renowned author Ivan Cankar described him as the best Slovene stylist of his period. He was an ardent describer of the Gorjanci Ridge and of the Lower Carniolan region of Slovenia. Trdina Peak, the highest peak of Gorjanci Ridge, situated on the border between southeastern Slovenia and Croatia, was named for him in 1923.

Kolovec is a settlement northeast of Domžale in the Upper Carniola region of Slovenia.

Rodica is a settlement on the outskirts of Domžale in the Upper Carniola region of Slovenia. It includes the hamlet of Groblje.

Edvard Peperko was a Slovene soldier.

Dobrava pri Črnučah is a formerly independent settlement in the northern part of the capital Ljubljana in central Slovenia. It is a dispersed settlement on both sides of the road from Ljubljana to Domžale. It is part of the traditional region of Upper Carniola and is now included with the rest of the municipality in the Central Slovenia Statistical Region.

Študa is a former village that is now part of Domžale in the Upper Carniola region of Slovenia.