Ni was born on August 6, 1891, in Sonlin (双林), Chekiang Province (Zhejiang 浙江), China. In 1908, he attended Chekiang First High School, which was considered to be one of the four best high schools in the Southern Yangtze River. Today, it's known as Hangzhou High School (杭州高级中学).

After his graduation in 1912, T.G. Ni became one of sixty students in the first class of the Chekiang Medical College (浙江省立医药专门学校), the first public medical school in China, which is recognized today as part of the Zhejiang University School of Medicine (浙江大学医学院).

He received his bachelor's in medicine in 1916 and went on to work at the Chekiang Army Hospital (浙江陆军军医院) as a Surgeon-Lieutenant. At the same time, T.G. Ni had passed the qualifying exam for the Boxer Indemnity Scholarship and initially intended to study in Germany. However, with the outbreak of World War I, he was reassigned to the United States and ended up at the University of Michigan (密西根大学) in Ann Arbor, Michigan.

Study in the U.S.

By 1919, T.G. Ni had received his M.S. and worked towards his doctorate degree with Professor Warren P. Lombard. He was also a member of the Cosmopolitan Club and Chinese Student Club. T.G. Ni's graduate studies at the University of Michigan Medical School lasted until 1922, when he was awarded a degree of Doctor of Science. His doctoral dissertation, The Active Response of Capillaries of Frogs, Tadpoles, Fish, Bats and Men to Various Forms of Excitation, was published in the American Journal of Physiology that same year.

Following his graduation, Dr. T.G. Ni was offered a fellowship at the Hsiang-Ya Medical College (湘雅医学院), but since he wanted more experiences in the U.S., he declined their offer. Instead, he focused on his post-doctoral study at the University of Minnesota (明尼苏达大学) in Minneapolis from 1922 until 1923 and then worked as a research fellow at Harvard Medical School (哈佛医学院) until 1924.

When Dr. T.G. Ni returned to China in 1924, he started to work at the Peking Union Medical College (PUMC, 北京协和医学院) alongside a pioneer of Chinese physiology, Dr. Robert Kho-seng Lim (林可胜). Dr. Ni then became one of the founding members of the Chinese Physiological Society (中国生理学会), which was established on February 27, 1926. He was also a member of the Chinese Medical Association (中华医学会), the Chinese Medico-Pharmaceutical Association (中华医药学会), and the Science Society of China (中国科学社).

From 1929 to 1930, Dr. Ni also took part in research, studies, and work at the University of Rochester in the United States, Plymouth University in England, and the University of Copenhagen in Denmark, where he worked with the Danish physiologist Poul Brandt Rehberg.

When he left PUMC in 1932, Dr. Ni went to the Henry Lester Institute of Medical Research in Shanghai (上海雷士德医学研究所). In December 1941, the Institute was occupied by the Japanese and was severely damaged that it could not recover from even after the Japanese army's surrender in 1945. After Communism settled over the land in 1949, it became known as the Shanghai Industrial Institute in 1954 and later changed to Shanghai Research Institute of Food Industries (上海食品工业科学研究所).

He co-authored the first paper of Dr. R.K.S. Lim after Dr. Lim was appointed as head of the physiology department at PUMC.

T.G. Ni retired from the Shanghai Research Institute of Food Industries in 1958 and died on March 12, 1965. He was survived by his wife, one daughter, and two sons. 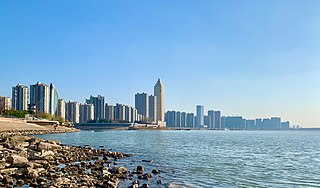 Zhejiang Medical University was a former university in Hangzhou, Zhejiang Province, China. In 1998, was merged into Zhejiang University to become its Medical School.

School of Aeronautics and Astronautics (SAA) of Zhejiang University, is one of the university schools/colleges primarily focuses on space technology in the People's Republic of China. 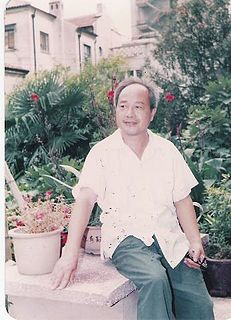 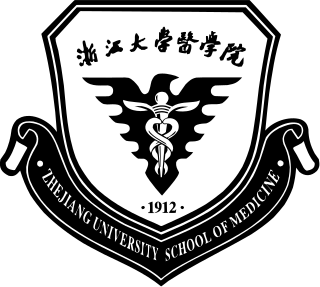 Lin Qiaozhi or Kha-Ti Lim was a Chinese obstetrician and gynecologist at the Peking Union Medical College Hospital. She conducted research in the fields of fetal breathing, female pelvic diseases, gynecologic oncology and neonatal hemolytic disorders. She revolutionized modern Chinese gynecology and oncology. As an obstetrician, she delivered over 50,000 babies in her career. She never married or had children of her own, but always wrote "Lin Qiaozhi's Baby" on the newborns' name tags, resulting in her nickname "Mother of Ten Thousand Babies(万婴之母)". She died in Beijing on April 23, 1983.

Lee Sun Chau was one of the first female Chinese doctors of Western Medicine in China.

Duan Shumin is a Chinese neuroscientist. He completed his undergraduate and master's degrees at Bengbu Medical College, and his Ph.D from Kyushu University. Then he did his postdoctoral research at University of Hawaii and University of California, San Francisco. From 2000 to 2009 he served as a principal investigator in Institute of Neuroscience in Shanghai, Chinese Academy of Sciences. He was elected a member of CAS in 2007, and of TWAS in 2008. 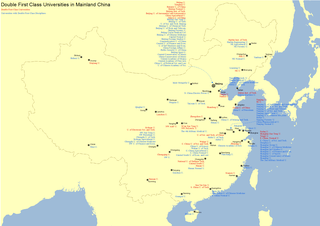 The World First Class University and First Class Academic Discipline Construction, combined and are known as Double First Class, is a tertiary education development initiative designed by the People's Republic of China government, in 2015, which aims to comprehensively develop elite Chinese universities and their individual faculty departments into world-class institutions by the end of 2050.

Shehua is an unclassified Sinitic language spoken by the She people of Southeastern China. It is also called Shanha, San-hak (山哈) or Shanhahua (山哈话). Shehua speakers are located mainly in Fujian and Zhejiang provinces of Southeastern China, with smaller numbers of speakers in a few locations of Jiangxi, Guangdong and Anhui provinces.