The Tsardom of Vidin (Bulgarian : Видинско царство, Vidinsko Tsarstvo) was a medieval Bulgarian state centred in the city of Vidin.

In 1257 the Hungarian lord Rostislav Mikhailovich attacked the Bulgarian capital of Tarnovo, but failed to take it, so he retreated to Vidin where he established himself, claiming the title of Tsar of Bulgaria, and the Hungarians recognized him with this title. [3]

Since the middle of the 13th century, the area of Vidin had been autonomous under ineffective Bulgarian overlordship, and was ruled successively by Yakov Svetoslav (died 1276), Shishman (died between 1308 and 1313), and then his son Michael Shishman, who received the high courtly title of despotēs from his cousin Theodore Svetoslav and was referred to in a contemporary Venetian source as a Despot of Bulgaria and Lord of Vidin. [4]

Jacob Svetoslav was the ruler of a widely autonomous domain of the Second Bulgarian Empire most likely located around Sofia. Seeking further independence and claiming the title of Emperor of Bulgaria, he twice changed allegiance from Bulgaria to the Kingdom of Hungary and vice versa, and the Hungarians recognized his Bulgarian royal rank as their vassal and ruler of Vidin (medieval Bdin). By 1261, he had become a despot , a high-ranking noble in the Bulgarian hierarchy. The title was awarded to him probably by his own suzerain, the ruler of Bulgaria, rather than a Byzantine emperor, [5] possibly Constantine Tih. [6] Jacob Svetoslav was close to the Bulgarian court and pledged loyalty to Constantine. Thus, the tsar made him the ruler of a domain usually considered to have been south of the Vidin region in the west of the Bulgarian Empire. [5] Byzantine sources indicate his possessions lay "near Haemus", thus close to Sofia, [6] between the Hungarian possessions to the north and Macedonia to the south. [7]

The death of Stephen V in 1272 meant that he was succeeded by his infant son Ladislaus IV, with the widowed consort and mother of the boy, Elizabeth, as his regent. At the time, Jacob Svetoslav still held Vidin as a Hungarian vassal. Possibly in 1273, Hungarian rule in Braničevo, west of Jacob's domain, was put to an end by two Cuman–Bulgarian nobles, Darman and Kudelin. Cut off from his Hungarian suzerains and facing the menace of a Bulgarian attack from the east, Jacob Svetoslav once again submitted to Bulgarian rule. He arrived in the capital Tarnovo to negotiate his submission with Constantine's consort Maria Palaiologina Kantakouzene, who was the dominant figure in the empire at the time due to the Tsar's paralysis. There, Jacob was formally adopted by the much younger [6] Maria as her second son, after the infant heir Michael Asen II. This adoption solidified Jacob's ties to the court and meant that he could safely retain his autonomous domain as a Bulgarian vassal. He also harboured hopes to ascend to the throne by ousting Michael when Constantine died. [8] Suspicious of these disloyal intentions of Jacob's, Constantine's consort Maria is thought to have poisoned him, [9] and he died in 1275 or 1276/1777, shortly before the Uprising of Ivaylo. [6]

While the fate of the city of Vidin itself is unclear, at least part of Jacob's possessions were certainly restored to direct Bulgarian rule in the wake of his death. One such territory was the Svrljig region lying southwest of Vidin, which in 1278 was documented as belonging to Bulgaria. [10]

Shishman of Vidin, Bulgarian nobleman (boyar), ruled the semi-independent despotate based out of the Danubian fortress in the late 13th and early 14th century (1270s/1280s - before 1308/1313). Shishman was bestowed the title of "despot" by Bulgarian emperors Theodore Svetoslav of Bulgaria and George Terter I. By early 1290s Serbia expanded towards the vicinity of Vidin. In 1291, he came under Golden Horde ("Tatar") suzerainty and in 1292 he was in charge of an unsuccessful campaign against neighbouring Serbia. Even though the Serbs captured Vidin in their counter-offensive, perhaps thanks to Tatar influence Shishman was placed once more as the ruler of the region, this time as a Serbian vassal. However, he continued to rule his lands largely independently. As his son and successor as despot of Vidin Michael Shishman acceded to the Bulgarian throne in 1323, Shishman was the progenitor of the last medieval Bulgarian royal dynasty, the Shishman dynasty. [11]

Serbian supremacy lasted until Serbian king Stefan Milutin´s death, in 1321. As Milutin left no testament, after his death, in Serbia occurred a period of civil war with Stefan Dečanski, Stefan Konstantin and Stefan Vladislav II fighting for power. [14] Michael Shishman was able to follow a more active policy in the Bulgarian capital Tarnovo. He soon became a leading noble in the internal affairs of the country and, on the childless death of young George Terter II in 1323, Michael Shishman was elected emperor of Bulgaria by the nobility. [15] According to some historians he was chosen because he was a descendant of the Asen dynasty and interpret his ascencion to the throne not as the beginning of a new dynasty but rather as a continuation of the House of Asen. [16] His half-brother, Belaur, succeeded him as last despot of Vidin. [17]

In 1356, Bulgarian tsar Ivan Alexander isolated Vidin from the Bulgarian monarchy and appointed his son Ivan Stratsimir (1356–1396) as absolute ruler, the first Tsar of the domain of Vidin.

In 1365, the state was occupied by Hungarian crusaders, but the occupation was short-lived. Although the initial campaign was not entirely successful because the Hungarians seized the city back, the ensuing negotiations between the Kingdom of Hungary and Ivan Alexander's allies, Vladislav I Vlaicu and Dobrotitsa, the despot of the semi-independent Dobrujan Principality of Karvuna, led to the return of the city to Bulgarian possession. It is thought that Ivan Sratsimir was reinstalled as the region's ruler in the autumn of 1369. In 1393 the whole of Bulgaria, along with the rest of the surrounding region, fell to the Ottoman Empire. This brought an end to Bulgaria's medieval state empire. Vidin was now the only region controlled by the indigenous Bulgarian population and not the invading Ottoman Turks.

The Ottomans went on to conquer the despotates of Dobruja, Prilep and Velbazhd as well. Vidin's independence did not last long. In 1396, Stratsimir contributed soldiers to assist the Christian nations' bid to overturn the Ottoman Empire. Following defeat at the hands of the Ottomans outside the city of Nicopolis, Vidin finally fell under the sphere of the Ottomans led by Bayezid I. [18] [19]

Despots and Tsars of Vidin

Ivan Sratsimir or Ivan Stratsimir was emperor (tsar) of Bulgaria in Vidin from 1356 to 1396. He was born in 1324 or 1325, and he died in or after 1397. Despite being the eldest surviving son of Ivan Alexander, Ivan Sratsimir was disinherited in favour of his half-brother Ivan Shishman and proclaimed himself emperor in Vidin. When the Hungarians attacked and occupied his domains, he received assistance from his father and the invaders were driven away.

Theodore Svetoslav ruled as emperor (tsar) of Bulgaria from 1300 to 1322. The date of his birth is unknown. He expanded the territory of the Bulgarian Empire.

George Terter II reigned as tsar of Bulgaria between 1322 and 1323. The exact date of his birth is unknown, but he was born not long before 1307.

Ivan Alexander, also sometimes Anglicized as John Alexander, ruled as Emperor (Tsar) of Bulgaria from 1331 to 1371, during the Second Bulgarian Empire. The date of his birth is unknown. He died on 17 February 1371. The long reign of Ivan Alexander is considered a transitional period in Bulgarian medieval history. Ivan Alexander began his rule by dealing with internal problems and external threats from Bulgaria's neighbours, the Byzantine Empire and Serbia, as well as leading his empire into a period of economic recovery and cultural and religious renaissance.

Michael Asen III, ruled as tsar of Bulgaria from 1323 to 1330. The exact year of his birth is unknown but it was between 1280 and 1292. He was the founder of the last ruling dynasty of the Second Bulgarian Empire, the Shishman dynasty. After he was crowned, however, Michael used the name Asen to emphasize his connection with the Asen dynasty, the first one to rule over the Second Empire. 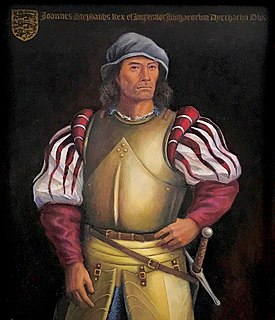 Ivan Stefan ruled as emperor (tsar) of Bulgaria for eight months from 1330 to 1331. He was the eldest son of emperor Michael III Shishman and Anna Neda of Serbia, a daughter of King Stefan Uroš II Milutin of Serbia. Ivan Stephen was a descendant of the Terter dynasty, the Asen dynasty and the Shishman dynasty. After his father's ascension to the throne in 1323 Ivan Stefan was associated as co-emperor. When Michael III Shishman divorced Anna Neda to marry Theodora Palaiologina, the daughter of Byzantine emperor Michael IX Palaiologos, in 1324, Ivan Stefan was exiled along with his mother and brother in a monastery. In the summer of 1330 he became emperor of Bulgaria with the help of his uncle Stephen Dečanski. After he was deposed in a coup d'état by the Tarnovo nobility, he fled along with Anna Neda in the domains of his father's brother Belaur in Niš and later to Dubrovnik. He was later expelled from there by Stephen Dušan under the pressure of Ivan Alexander. Ivan Stefan probably died in Naples.

The Second Bulgarian Empire was a medieval Bulgarian state that existed between 1185 and 1396. A successor to the First Bulgarian Empire, it reached the peak of its power under Tsars Kaloyan and Ivan Asen II before gradually being conquered by the Ottomans in the late 14th century.

Constantine II, allegedly ruled as emperor (tsar) of Bulgaria from 1397 to 1422. He was born in the early 1370s, and died in exile at the Serbian court on 17 September 1422. Constantine II claimed the title Emperor of Bulgaria and was accepted as such by foreign governments, but he is often omitted from listings of rulers of Bulgaria. 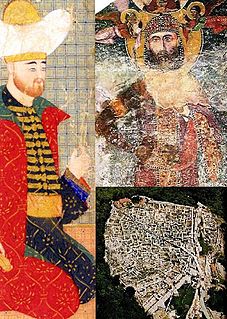 The Bulgarian–Ottoman wars were fought between the kingdoms remaining from the disintegrating Second Bulgarian Empire, and the Ottoman Empire, in the second half of the 14th century. The wars resulted with the collapse and subordination of the Bulgarian Empire, and effectively came to an end with the Ottoman conquest of Tarnovo in July 1393, although other Bulgarian states held out slightly longer, such as the Tsardom of Vidin until 1396 and the Despotate of Dobruja until 1411. As a result of the wars the Ottoman Empire greatly expanded its territory on the Balkan peninsula, stretching from the Danube to the Aegean Sea.

Terter, also Terterids or Terterovtsi (Тертеровци), was a Bulgarian noble and royal house of Cuman origin, a branch of the Cuman noble dynasty of Terteroba, that ruled the Second Bulgarian Empire between 1280 and 1292, as well as between 1300 and 1323.

Keratsa Petritsa was a Bulgarian noblewoman (bolyarka), sister of tsar Michael Shishman of Bulgaria. Her eldest son Ivan Alexander rose to the Bulgarian throne after vicissitudes of politics.

Jacob Svetoslav was a prominent 13th-century Bulgarian noble (bolyarin) of princely Rus' origin. Bestowed the title of despot, Jacob Svetoslav was the ruler of a widely autonomous domain of the Second Bulgarian Empire most likely located around Sofia. Seeking further independence and claiming the title of Emperor of Bulgaria, he twice changed allegiance from Bulgaria to the Kingdom of Hungary and vice versa, and the Hungarians recognized his Bulgarian royal rank as their vassal and ruler of Vidin.

Shishman was a Bulgarian nobleman (boyar) who ruled a semi-independent realm based out of the Danubian fortress of Vidin in the late 13th and early 14th century. Shishman, who was bestowed the title of "despot" by Bulgarian emperor George Terter I, was a Cuman, and may have been established as lord of Vidin as early as the 1270s.

Theodora Palaiologina was a Byzantine princess who became a Bulgarian empress as wife of the emperors Theodore Svetoslav from 1308 to his death in 1321, and Michael Shishman from 1324 to his fall in the Battle of Velbazhd on 28 July 1330.