Tsarevich Dmitry Alexeyevich (Russian : Дмитрий Алексеевич; 22 August 1648 – 6 October 1649) was the first son and heir of Tsar Alexis of Russia and Maria Miloslavskaya, brother of Tsarevich Alexei Alexeyevich of Russia, Tsar Feodor III of Russia and Tsar Ivan V of Russia and half-brother of Tsar Peter the Great. He died in infancy at the age of nine months, some 26 years before the death of his father. He is buried in the Cathedral of the Archangel. 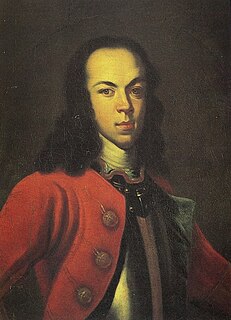 Grand Duke Alexei Petrovich of Russia was a Russian Tsarevich. He was born in Moscow, the son of Tsar Peter I and his first wife, Eudoxia Lopukhina. Alexei despised his father and repeatedly thwarted Peter's plans to raise him as successor to the throne. His brief defection to Austria scandalized the Russian government, leading to harsh repressions against Alexei and his associates. Alexei died after interrogation under torture, and his younger half brother Peter Petrovich became the new heir apparent. 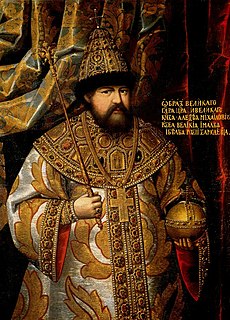 Peter II Alexeyevich reigned as Emperor of Russia from 1727 until his untimely death at the age of 14. He was the only son of Tsarevich Alexei Petrovich and of Charlotte Christine of Brunswick-Lüneburg. He was the last male agnatic member of the House of Romanov.

Tsesarevich was the title of the heir apparent or presumptive in the Russian Empire. It either preceded or replaced the given name and patronymic.

Tsarevich is a Slavic title given to tsars' sons. Under the 1797 Pauline house law, the title was discontinued and replaced with Tsesarevich for the heir apparent alone. His younger brothers were called Velikiy Knjaz, meaning Grand Prince, although it was commonly translated to English as Grand Duke. English sources often confused the terms Tsarevich and Tsesarevich.

Sophia Alekseyevna ruled as regent of Russia from 1682 to 1689. She allied herself with a singularly capable courtier and politician, Prince Vasily Golitsyn, to install herself during the minority of her brother Ivan V and half-brother Peter I. She carried out her regency with a firm hand. The activity of this "bogatyr-tsarevna" was all the more extraordinary, as upper-class Muscovite women, confined to the upper-floor terem and veiled and guarded in public, invariably were kept aloof from any open involvement in politics. 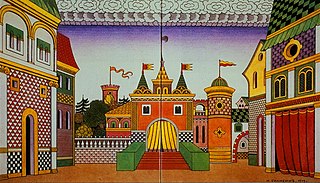 The Golden Cockerel is an opera in three acts, with short prologue and even shorter epilogue, composed by Nikolai Rimsky-Korsakov, his last opera he completed before his death in 1908. Its libretto written by Vladimir Belsky derives from Alexander Pushkin's 1834 poem The Tale of the Golden Cockerel. The opera was completed in 1907 and premiered in 1909 in Moscow, after the composer's death. Outside Russia it has often been performed in French as Le coq d'or.

Tsarevich Dmitry or Dmitri Ivanovich, also known as Dmitry of Uglich or Dmitry of Moscow, was a Russian tsarevich, the son of Tsar Ivan the Terrible. Dmitry was famously impersonated by a series of pretenders after his death.

Vasili IV Shuisky was Tsar of Russia between 1606 and 1610 after the murder of False Dmitri I. His rule coincided with the Time of Troubles. He was the only member of House of Shuisky to become Tsar and the last member of the Rurikid dynasty to rule as tsar.

Alexey, Alexei, Alexie, Aleksei, or Aleksey is a Russian and Bulgarian male first name deriving from the Greek Aléxios (Αλέξιος), meaning "Defender", and thus of the same origin as the Latin Alexius.

Maria Ilyinichna Miloslavskaya was a Russian tsaritsa as the first spouse of tsar Alexis of Russia. She was the mother of tsar Feodor III of Russia, tsar Ivan V of Russia, and the princess regent Sophia Alekseyevna.

"Tsarevich Ivan, the Firebird and the Gray Wolf" is a Russian fairy tale collected by Alexander Afanasyev in Russian Fairy Tales.

Beloved Beauty is a 1958 feature-length stop motion-animated film from the Soviet Union. The film, which was made at the Soyuzmultfilm studio, is based on Russian folk tales. 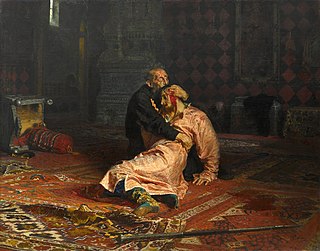 Ivan Ivanovich was a Tsarevich of Russia and the son of Ivan the Terrible, who killed him in a fit of rage.

Kirill Poluektovich Naryshkin was the maternal grandfather of Peter the Great.

Tsarevich Alexei Alexeyevich was the second son and heir of Tsar Alexis of Russia and Maria Miloslavskaya, brother of Tsar Feodor III, Tsar Ivan V, and Tsarevna Sophia and half-brother of Tsar Peter the Great.

Tsarevich Peter Petrovich was a Russian Tsarevich who was heir to the Russian throne from February 1718 upon the removal of his older half brother, Alexis Petrovich to his death in 1719. His parents were Tsar Peter I and the future Catherine I. In 1732, a pretender emerged claiming to be the dead Tsarevich.

Elizaveta Nikolaevna "Liza" Ersberg was a German-Russian parlormaid who served in the Russian Imperial Household. The daughter of a stoker employed by Emperor Alexander III, she was hired by Empress Maria Feodorovna as a parlormaid at the Alexander Palace in 1898. She used her post to obtain a position at court for her friend Anna Demidova, who became a lady-in-waiting to Empress Alexandra Feodorovna.