Tsav may refer to: 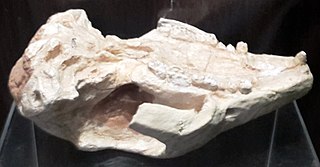 Chulsanbaatar is a genus of mammal from the Cretaceous of Mongolia. It lived during the Mesozoic, also known as the "age of the dinosaurs." This small creature was a member of the extinct order of Multituberculata and is within the suborder Cimolodonta. The genus Chulsanbaatar was named by Kielan-Jaworowska Z. in 1974.

Catopsbaatar is a genus of multituberculate, an extinct order of rodent-like mammals. It lived in what is now Mongolia during the late Campanian age of the Late Cretaceous Period, about 72 million years ago. The first fossils were collected in the early 1970s, and the animal was named as a new species of the genus Djadochtatherium in 1974, D. catopsaloides. The specific name refers to the animal's similarity to the genus Catopsalis. The species was moved to the genus Catopsalis in 1979, and received its own genus in 1994. Five skulls, one molar, and one skeleton with a skull are known; the latter is the genus' most complete specimen. Catopsbaatar was a member of the family Djadochtatheriidae.

Buginbaatar is an extinct genus of mammal from the Upper Cretaceous of Mongolia. It is a member of the extinct order Multituberculata, within the suborder Cimolodonta and family Cimolomyidae. It lived towards the end of the Mesozoic era.

The Bayankhongor Province or Bayanhongor Aimag is one of the 21 aimags (provinces) of Mongolia. It is located in the southwest of the country and, at 116,000 square kilometers, it is one of the largest aimags. The capital of the aimag shares the provincial name, Bayankhongor. 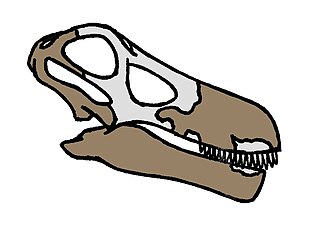 Quaesitosaurus is a genus of nemegtosaurid sauropod found by Kurzanov and Bannikov in 1983. The type species is Quaesitosaurus orientalis. It lived from 85 to 70 million years ago during the Late Cretaceous. Its fossils, consisting solely of a partial skull, were found in the Barun Goyot Formation near Shar Tsav, Mongolia. Long, low and horse-like with frontally located peg-teeth, it is similar enough to the skulls of Diplodocus and its kin to have prompted informed speculation that the missing body was formed like those of diplodocids.

Nomingia is a genus of oviraptorid theropod dinosaur hailing from the Late Cretaceous Bugin Tsav Beds of Mongolia.

Alioramus is a genus of tyrannosaurid theropod dinosaurs from the Late Cretaceous period of Asia. The type species, A. remotus, is known from a partial skull and three foot bones recovered from Mongolian sediments which were deposited in a humid floodplain about 70 million years ago. These remains were named and described by Soviet paleontologist Sergei Kurzanov in 1976. A second species, A. altai, known from a much more complete skeleton, was named and described by Stephen L. Brusatte and colleagues in 2009. Its relationships to other tyrannosaurid genera are unclear, with some evidence supporting a hypothesis that Alioramus is closely related to the contemporary species Tarbosaurus bataar.

Breviceratops was a herbivorous ceratopsian dinosaur from the Late Cretaceous of Mongolia.

Platyceratops is a genus of ceratopsian dinosaur from the Late Cretaceous of Mongolia. It lived during the Campanian stage, about 75-72 million years ago. The name Platyceratops is derived from Greek, and means "flat horned face". Platyceratops is similar to Bagaceratops, although its skull is larger. It has been referred to the Bagaceratopidae or at least the Neoceratopsia. It is possibly a junior synonym of Bagaceratops. The type species is Platyceratops tatarinovi, described by Alifanov in 2003.

Lamaceratops, is a ceratopsian dinosaur from the Late Cretaceous of Mongolia. It was discovered in the Khulsan locality in the Nemegt Valley, outer Mongolia. The validity of this species remains in doubt, as the fossils may in fact be referable to Bagaceratops.

Gurilynia is a genus of enantiornithine birds. One species is known, G. nessovi. It lived during the Maastrichtian stage of the Late Cretaceous period, between 70 and 66 mya. Gurilynia is known from fragmentary fossils found at the Gurilyn Tsav locality of the Nemegt Formation in south Gobi, Mongolia.

Estesia is an extinct genus of Late Cretaceous helodermatoid lizard found in the Gobi Desert in Mongolia. It was discovered in June 1990 by a joint expedition made up of Mongolian and American palaeontologists, and described in 1992 by Mark Norell, Malcolm McKenna and Michael Novacek. This animal is of interest to palaeontologists, not only because it is close to the lineage of modern Gila monsters (Heloderma), but also because its dentition shows evidence that it was venomous. 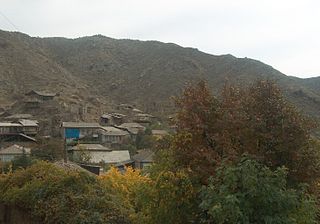 Shishkert is a village in the rural community of Tsav, Syunik Province, Armenia. The National Statistical Service of the Republic of Armenia (ARMSTAT) reported its population as 342 at the 2001 census.

Tsav is a village and rural community (municipality) in the Syunik Province of Armenia. It has fishfarm, school and clinic.

Gobiceratops is a genus of ceratopsian dinosaur from the Upper Cretaceous of Mongolia. It is based on a skull that is 3.5 centimeters long, from the Khermin Tsav locality in the Barun Goyot Formation of southern Mongolia; the type individual was young. Gobiceratops is thought to have been related to Bagaceratops, and a member of Bagaceratopidae. It was described in 2008 by Alifanov. The type species is G. minutus.

Zanabazar is an extinct genus of troodontid theropod dinosaur from the Late Cretaceous of Mongolia. The genus was originally named by Rinchen Barsbold as a species of Saurornithoides, S. junior. In 2009 it was reclassified as its own genus, named after the first spiritual figurehead of Tibetan buddhism, Zanabazar. The holotype, GIN 100–1, includes a skull, vertebrae, and right hindlimb. Zanabazar was one of the most derived troodontids, and the second largest after Troodon.

Hollanda is a genus of small ground birds known from fossils found in the Barun Goyot Formation of Mongolia. Found at Khermeen Tsav, it dates from the late Cretaceous period, about 75 million years ago. Known only from partial hind limbs, Hollanda has long legs with an unusual configuration of the toes. These indicate that it was a fast-running ground bird, possibly similar to the modern Roadrunner. Its relationships are uncertain. Some studies have found that it was an relatively advanced bird, a member of the Ornithurae, related to birds like Ichthyornis. Other studies have recovered it as a member of the primitive family Songlingornithidae.

Pleurodontagama is an extinct genus of iguanian lizard from the Late Cretaceous of Mongolia. The type species, Pleurodontagama aenigmatodes, was named in 1984 on the basis of a mostly complete skull and isolated lower jaw from a fossil locality called Khermeen Tsav. It has a wide skull with a flat snout, large eye sockets, and small bumps on the surfaces of the bones. Pleurodontagama was initially classified in the family Priscagamidae, which is usually grouped in a large clade of iguanians called Acrodonta, members of which are characterized by an "acrodont" dentition in which the teeth grow from the margins of the jaws. However, Pleurodontagama is unusual in that it has a sub-pleurodont dentition, meaning that some of its teeth grow from the inner surfaces of the jaw. There is also evidence to suggest that its teeth may have been continuously replaced throughout life, as opposed to the permanent teeth of acrodontans. Pleurodontagama may have been a transitional form between the derived acrodont type and the pleurodont type inferred for the ancestors of Acrodonta.

The "Gurlin Tsav" skull is a currently unnamed carnivorous metatherian fossil from the Nemegt Formation of Mongolia. Composed of a single semi-complete skull, this specimen is notable in regards to the evolution and systematics of Metatheria as a whole, and thus nigh-omnipresent in phylogenetic analyses of this group.