Tsawwassen Mills is a shopping mall on Tsawwassen First Nations land, in Delta, British Columbia. The mall was built by Ivanhoé Cambridge Inc. and opened on October 5, 2016. It features 1.2 million square feet of retail space and a 1,100 seat food court. It features 200 retailers, including Bass Pro Shops as well as its sister chain Uncle Bucks, and Saks Off 5th. [2] It is modeled after the successful CrossIron Mills outside Calgary, and Vaughan Mills in Vaughan, Ontario.

The mall opened on October 5, 2016, attracting 284,000 shoppers in its first six days. [3] The grand opening attracted 50,000 alone and caused massive traffic jams in the parking lot and surrounding streets. [4] 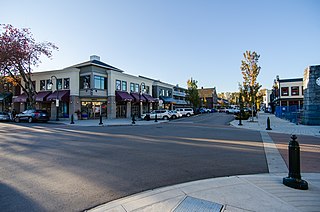 Delta is a city in British Columbia, and forms part of Greater Vancouver. Located south of Richmond, it is bordered by the Fraser River to the north, the United States to the south and the city of Surrey to the east. Delta is composed of three distinct communities: Ladner, Tsawwassen, and North Delta.

Tsawwassen is a suburban, mostly residential community located on a peninsula in the southwestern corner of the City of Delta in British Columbia, Canada. Tsawwassen provides the only road access to the American territory on the southern tip of the peninsula, the community of Point Roberts, Washington, via 56th Street. It is also the location of Tsawwassen Ferry Terminal, part of the BC Ferries, built in 1959 to provide foot-passenger and motor vehicle access from the Lower Mainland to the southern part of Vancouver Island and the southern Gulf Islands. Because Tsawwassen touches a shallow bank, the ferry terminal is built at the southwestern end of a 3 km (1.9 mi) long causeway that juts out into the Strait of Georgia. The ferry dock and causeway are part of Highway 17. Boundary Bay Airport, a major training hub for local and international pilots which also provides local airplane and helicopter service, is located ten minutes away. The Roberts Bank Superport is also located near Tsawwassen.

Yorkdale Shopping Centre, or simply Yorkdale, is a major retail shopping mall in North York, Toronto, Ontario, Canada. Located at the intersection of Highway 401 and Allen Road, it opened in 1964 as the largest enclosed shopping mall in the world. Yorkdale is currently the third largest shopping mall in Canada by floor space and has the highest sales per unit area of any mall in Canada, with current merchandise sales levels at roughly CA$1,905/square foot. At 18 million annual visitors, it is one of the country's busiest malls. Many international retailers have opened their first Canadian locations at Yorkdale.

Vaughan Mills is a regional outlet mall located at the southeast corner of Highway 400 and Rutherford Road, in Vaughan, Ontario, just south of Canada's Wonderland. It is one of the largest enclosed shopping centres in Canada, and the largest shopping mall in York Region with almost 1.3 million square feet (120,000 m2) of retail space. The complex has over 200 retail stores, restaurants, and entertainment outlets.

Fairview Mall is a large shopping centre in Toronto, Ontario, Canada of about 80,000 m2 (860,000 sq ft). Opened in 1970, the centre has over 180 stores, offices and a cinema complex. It is located several kilometres north-east of downtown, at the northeast corner of Don Mills Road and Sheppard Avenue East in the former borough of North York.

The Mills Corporation was a publicly traded real estate investment trust headquartered in Chevy Chase, Maryland, United States, acquired on April 3, 2007 by an investment group composed of Simon Property Group and Farallon Capital Management. The company developed, owned, and operated major super-regional shopping malls. The company built 18 "Landmark" centers in which the malls were named after "Mills", like "Vaughan Mills," or "St. Louis Mills"; and also over 20 "21st Century Retail" regional malls that they started operating in 2002, like Del Amo Fashion Center and Southdale Center. Most former Mills facilities have a large movie theater from 10–30 screens, and a large food court. Their facilities were normally built in colorful modern/abstract architectural designs, but in recent years have been renovated to more conventional designs with mainly neutral colors. Simon Property Group assumed management of the former Mills properties after the acquisition, and is operating the former "Landmark Mills" group as a separate operating segment within its organization.

Southgate Centre is a shopping centre located in south Edmonton, Alberta, Canada, covering just under 90,000 square metres. It contains 165 retailers including The Bay, Aritzia, Zara, Michael Kors, Coach, Inc., Browns Shoes and Edmonton's only Restoration Hardware and Crate & Barrel. Apple opened a second store in Edmonton at Southgate Centre on May 28, 2010, and Edmonton's first Lego store opened in June 2013. The Centre is located adjacent to Whitemud Drive and 111 Street, and is located across from a transit bus station and the Southgate LRT Station. 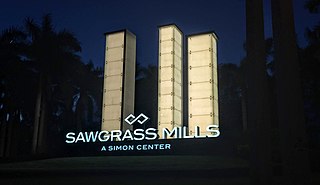 Sawgrass Mills is an outlet shopping mall operated by the Simon Property Group, in Sunrise, Florida, a city in Broward County. With 2,370,610 square feet (220,237 m2) of retail selling space, it is the eleventh largest mall in the United States, the largest single story outlet mall in the U.S., the largest shopping mall in Broward County, the second largest mall in Florida and the Miami metropolitan area after the Aventura Mall, and the third largest shopping mall in the southeastern United States. It opened in 1990 as the third mall developed by the now-defunct Mills Corporation, and was located next to BB&T Center and has been expanded four times since then, most recently in 2013. There are over 329 retail outlets and name brand discounters, with anchors including Off 5th Saks Fifth Avenue, and Super Target.

CrossIron Mills is a fully enclosed shopping centre development just outside the northern city limits of Calgary, Alberta, Canada, and immediately east of the hamlet of Balzac in Rocky View County. It was developed by Ivanhoé Cambridge, a major Canadian real estate company. Completed in August 2009, the mall is the largest single-level shopping centre in Alberta, containing approximately 109,440 m2 (1,178,000 sq ft) of retail and entertainment space. Immediately east of the CrossIron Mills property is Century Downs Racetrack and Casino, one of two A-level equine racetracks in Alberta. Operated by the United Horsemen of Alberta (UHA), Century Downs Racetrack and Casino has been open since April 2015. 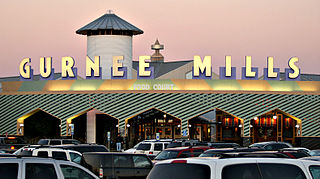 Gurnee Mills is a shopping mall and outlet mall in Gurnee, Illinois, a northern suburb of Chicago near Waukegan. Like the nearby Six Flags Great America and Great Wolf Lodge, the mall's placement in Gurnee is intended to bring customers from both Chicago and Milwaukee, Wisconsin. With 1,935,954 square feet (179,856.0 m2) of gross leasable area and ten major anchor stores in its Z-shaped single-story building, it is the third largest mall in Illinois, and the largest of the four enclosed shopping centers in Lake County. Owned and operated by the Simon Property Group, it was an early part of the "Landmark Mills" chain of shopping malls built by the Mills Corporation. The mall features Macy's, Kohl's, Marshalls, Value City Furniture, Bass Pro Shops Outdoor World, Off Broadway Shoe Warehouse, Bed Bath & Beyond, Forever 21, H&M, Dick's Sporting Goods, Marcus Theatres, Rainforest Cafe, Tilt Studio, The RoomPlace, Burlington Coat Factory, Rink Side, Buy Buy Baby and Floor & Decor as its anchor tenants.

Kings Plaza is a shopping center within the Mill Basin section of Brooklyn, New York City, United States. Opened in September 1970, it is located at the southeast corner of Flatbush Avenue and Avenue U, just north of Floyd Bennett Field. The mall's anchor stores include Best Buy, Burlington, JCPenney, Lowe's, Macy's, Primark, and Zara. Previous anchor stores of the mall include Alexander's and Sears. The mall was originally owned by a joint venture between Macy's and Alexander's, and is currently owned and managed by Macerich. With approximately 4,200 jobs in retail services and over 120 individual stores, Kings Plaza is the largest indoor shopping center within the borough of Brooklyn.

Oshawa Centre is a two-storey shopping mall located in the city of Oshawa, Ontario, Canada. Located at King Street and Stevenson Road, it is the largest mall in Durham Region and the largest in Ontario east of Toronto with over 230 retail stores and public services. Its Executive Office complex includes the Ministry of Health and Long-Term Care of Ontario.

The Tsawwassen First Nation is a First Nations government whose lands are located in the Greater Vancouver area of the Lower Mainland of British Columbia, Canada, adjacent to the South Arm of the Fraser River and the Tsawwassen Ferry Terminal and just north of the international boundary with the United States at Point Roberts, Washington. Tsawwassen First Nation lists its membership at approximately 490 people, about half of whom live on the reserve.

Mapleview Centre, or simply Mapleview, is a two-story shopping mall located in Burlington, Ontario, Canada. It is located at the intersection of Maple Avenue and Fairview Street, south of the Queen Elizabeth Way (QEW). The name of the mall comes from the two streets in which it is located.

McArthurGlen Designer Outlet Vancouver Airport is an outlet mall on Sea Island in Richmond, British Columbia. It is located in close proximity to Vancouver International Airport. It currently has around 80 retailers over 340,000 square feet.