Tscherne may refer to:

Hot Wheels is a brand of die-cast toy cars introduced by American toy maker Mattel in 1968. It was the primary competitor of Matchbox until 1997, when Mattel bought Tyco Toys, then-owner of Matchbox.

The Burgtheater, originally known as K.K. Theater an der Burg, then until 1918 as the K.K. Hofburgtheater, is the Austrian National Theatre in Vienna, the most important German language theatre and one of the most important theatres in the world. The Burgtheater was created in 1741 and has become known as "die Burg" by the Viennese population; its theatre company of more or less regular members has created a traditional style and speech typical of Burgtheater performances.

Alarm für Cobra 11 – Die Autobahnpolizei is a long-running, popular German television series about a two-man team of highway police (Autobahnpolizei), originally set in Berlin and since 1999 in the area of Cologne in North Rhine-Westphalia. The series has been broadcast in 120 countries worldwide.

Johnny Lightning is a brand of model cars originally produced by Topper Toys, similar to the hugely successful Mattel Hot Wheels die cast racing cars. Their claim to fame at that time was that they were extremely fast compared to other brands of die-cast cars. Their most important technology was to mold in a small hook under the front axle so that they could be propelled by a lever-driven catapult, far faster than could be obtained by either gravity, or battery powered "supercharger" devices.

Phenindamine is an antihistamine and anticholinergic closely related to cyproheptadine. It was developed by Hoffman-La Roche in the late 1940s. It is used to treat symptoms of the common cold and allergies, such as sneezing, itching, rashes, and hives. Its efficacy against some symptoms of opioid withdrawal was researched in the 1950s and 1960s in a number of countries; William S. Burroughs' book Junkie mentions this technique. Like many other first-generation antihistamines, phenindamine has useful potentiating effects on many narcotic analgesics and is even more useful with those opioids which release histamine when in the body.

Laßnitzhöhe is a municipality with 2,718 inhabitants in the district of Graz-Umgebung in Styria, Austria. Laßnitz means brook in the forest and refers to the local river Laßnitz.

Fast & Furious is an American media franchise centered on a series of action films that is largely concerned with illegal street racing, heists and spies. The franchise also includes short films, a television series, live shows, video games and theme park attractions. It is distributed by Universal Pictures.

Franz Tscherne is an Austrian actor and film director.

Peter Palese is a United States microbiologist and Professor and Chair of the Department of Microbiology at the Icahn School of Medicine at Mount Sinai in New York City, and an expert in the field of RNA viruses.

The term co-option refers to the capacity of intracellular parasites to use host-cell proteins to complete their vital cycle. Viruses use this mechanism, as their genome is small.

Gottscheerish is an Upper German dialect which was the main language of communication among the Gottscheers in the enclave of Gottschee, Slovenia, before 1941. It is occasionally referred to as Granish or Granisch in the United States, a term also used for Slovene. Today there are only a few speakers left in Slovenia and around the world.

The Presbyterian Church in Paraguay is an independent confessional Reformed Calvinist denomination in Paraguay, it was founded by Brazilian missionaries.

Fracture sonography is the use of medical ultrasound to detect bone fractures. While medical ultrasound is used to visualize soft tissues like skin, organs, and blood vessels, fracture sonography is used to visualize fractures on only bone surfaces. It is useful for children aged 12 or younger because all fractures cause alterations of the bone surface, and joint fractures are uncommon at such ages. For joint fractures that are common in adult bones and cannot be visualized properly, patients older than 12 years are not eligible for ultrasound fracture diagnosis. The method is feasible for detecting fractures of the wrist, elbow, shoulder and clavicle. The advantages of fracture sonography are the avoidance of radiation exposure, faster examinations, and the ability to use standard ultrasound devices, which are more widespread. In the mentioned fields of application, ultrasound is as safe as X-ray diagnosis. 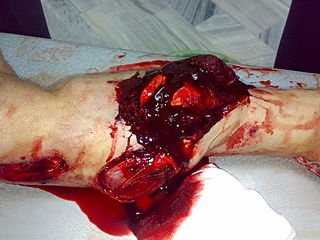 Tibia shaft fracture is a fracture of the proximal (upper) third of the tibia. Due to the location of the tibia, it is frequently injured. Thus it is the most commonly fractured long bone in the body.

The 1975–76 Minnesota Golden Gophers men's ice hockey team represented the University of Minnesota in college ice hockey. In its 4th year under head coach Herb Brooks the team compiled a 28–14–2 record and reached the NCAA tournament for the third consecutive year and seventh all-time. The Golden Gophers defeated Michigan Tech 6–4 in the championship game at the DU Arena in Denver, Colorado to win their second national championship.