Last updated May 16, 2022
Mountain in Switzerland

The Tschingelspitz is a mountain of the Bernese Alps, located south of Mürren in the Bernese Oberland. It lies east of the higher Gspaltenhorn. 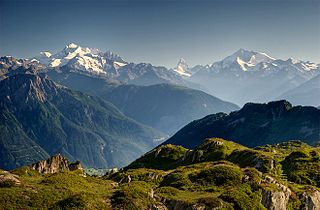 The Bernese Mountain Dog is a large dog breed, one of the four breeds of Sennenhund-type dogs from the Swiss Alps. These dogs have roots in the Roman mastiffs. The name Sennenhund is derived from the German Senne and Hund (hound/dog), as they accompanied the alpine herders and dairymen called Senn. Berner refers to the area of the breed's origin, in the canton of Bern. This breed was originally kept as a general farm dog. Large Sennenhunde in the past were also used as draft animals, pulling carts. The breed was officially established in 1912.

The canton of Bern or Berne is one of the 26 cantons forming the Swiss Confederation. Its capital city, Bern, is also the de facto capital of Switzerland. The bear is the heraldic symbol of the canton, displayed on a red-yellow background.

BSC Young Boys are a Swiss sports club based in Bern, Switzerland. Its first team has won 15 Swiss league championships and six Swiss Cups. YB is one of the most successful Swiss football clubs internationally, reaching the semi-finals of the European Cup in the 1958–59 season. The club's colours are yellow of a golden shade and black.

Bernese German is the dialect of High Alemannic German spoken in the Swiss plateau (Mittelland) part of the canton of Bern and in some neighbouring regions. A form of Bernese German is spoken by the Swiss Amish affiliation of the Old Order Amish in Adams County, Indiana, United States, as well as and other settlements in the US, primarily in Indiana. 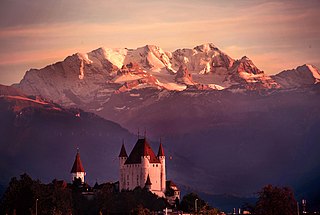 The Bernese Oberland is the highest and southernmost part of the canton of Bern, and one of the canton's five administrative regions. It constitutes the Alpine region of the canton and the northern side of the Bernese Alps, including many of its highest peaks, among which the Finsteraarhorn, the highest in both range and canton.

Bernese Jura is the name for the French-speaking area of the Swiss canton of Bern, and from 2010 one of ten administrative divisions of the canton.

The Lohn Estate is a manor and estate located in Kehrsatz, canton of Bern, Switzerland. It serves as the official estate of the Swiss Federal Council. From 1942 to 1994, the Lohn Estate accommodated the official guests of the Swiss Confederation, which have included a number of heads of States and royalty. It is a Swiss heritage site of national significance. 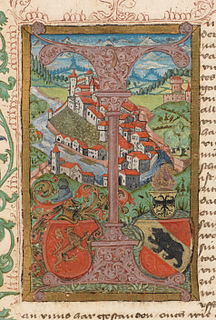 The city of Bern is one of the Zähringer foundations of the late 12th century. By the end of the 13th century, it had acquired de facto imperial immediacy. It became a full member of the Old Swiss Confederacy in 1353, and during the 15th century managed to significantly expand its sphere of influence, notably with the conquest of Aargau in 1415. With the acquisition of Vaud in 1536, Bern became the most powerful city-republic north of the Alps, and one of the leading Protestant cities in early modern Switzerland. The canton of Bern in the Restored Confederacy of 1815 even after the loss of Aargau and Vaud remained the largest Swiss canton, relegated to second rank only with the secession of Jura in 1979. Since 1848 Bern has served as the federal city (capital) of Switzerland.

The Bernese March is the traditional anthem of the Swiss Canton of Bern and is played at official occasions. 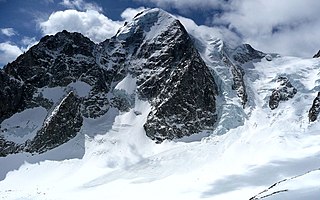 The Nesthorn is a mountain in the Bernese Alps. It is located in the Swiss canton of Valais north of Brig. The mountain lies between the Oberaletsch Glacier on the north and east side and the Gredetschtal on the south side. It is part of the subrange of the Bernese Alps that culminates at the Aletschhorn.

The Grand Muveran is a mountain of the Bernese Alps, located on the border between the cantons of Vaud and Valais. At 3,051 metres, it is the highest summit of the group lying between the Rhone knee and the Pas de Cheville and the westernmost three-thousander of the Bernese Alps. The closest localities are Les Plans-sur-Bex and Ovronnaz (Valais). It is accompanied by the smaller peak of Petit Muveran. 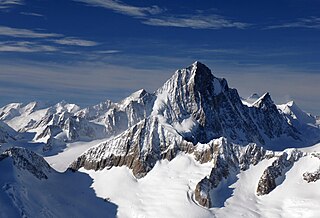 The Jungfrau-Aletsch protected area is located in south-western Switzerland between the cantons of Berne and Valais. It is a mountainous region in the easternmost side of the Bernese Alps, containing the northern wall of Jungfrau and Eiger, and the largest glaciated area in western Eurasia, comprising the Aletsch Glacier. The Jungfrau-Aletsch protected area is the first World Natural Heritage site in the Alps; it was inscribed in 2001.

The International Bernese Ladies Cup is an annual bonspiel which was started in 1968 and became an event on the women's World Curling Tour in 2007. It is held every January at the Curlingbahn Allmend in Bern, Switzerland.