Tsepelovo (Greek : Τσεπέλοβο) is a village in the Zagori region (Epirus region). It stands at a height of 1,200 meters in a panoramic location on the mountain range of Tymfi. It is the biggest of the 45 villages of Zagori and it was the seat of Tymfi municipality. Its name is of Slavic origin. It lies in the middle of the Vikos–Aoös National Park, 48 km from Ioannina.

Founded in the 16th century, Tsepelovo became from the 18th century onwards the administrative center of Zagori. It remained relatively prosperous until the end of the Ottoman occupation (1912). The village was a local trade center, and remains so especially because of the trade of timber. In 1820, before the outbreak of the Greek Revolution and the defeat of Ali Pasha, the poet Ioannis Vilaras and the famous Epirote scholar Athanasios Psalidas came from Ioannina to prepare the people for the great national revolt. Psalidas also taught for 2 years at the local school.

The traditional stone architecture is visible in every building, in the village paths, dwellings and churches. The historical church of Agios Nikolaos was renovated at 1753 and decorated with unique wall paintings by exceptional painters of nearby Kapesovo. [2]

Two kilometers out of the village, in the Vikaki (Greek: small Vikos) canyon lies the monastery of St John Rogovou. It was founded at 1028 by the sister of Emperor Romanos III Argyros of Byzantium. It was rebuilt in 1749, possibly after it was damaged by fire, and the frescoes were painted by iconographers from Kapesovo. Neofytos Doukas wanted to establish there the Higher School of Epirus (Greek : Ανωτέρα Σχολή), a high level educational institution. Because of the outbreak of the Greek War of Independence and the military conflicts the idea could not become reality.

The people of Tsepelovo used to emigrate within Greece to Macedonia, Thrace and to areas of southern Greece. Outside Greece, they mainly migrated to Asia Minor and the U.S. [3]

Today, the village is a popular destination for tourists during the winter season.

The Pindus is a mountain range located in Northern Greece and Southern Albania. It is roughly 160 km long, with a maximum elevation of 2,637 metres (8652'). Because it runs along the border of Thessaly and Epirus, the Pindus range is known colloquially as the spine of Greece. The mountain range stretches from near the Greek-Albanian border in southern Albania, entering the Epirus and Macedonia regions in northern Greece down to the north of the Peloponnese. Geologically it is an extension of the Dinaric Alps, which dominate the western region of the Balkan Peninsula. 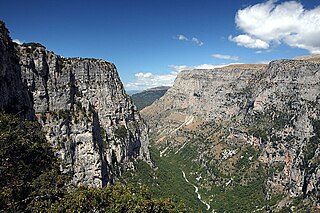 The Vikos–Aoös National Park is a national park in the region of Epirus in northwestern Greece. The park, founded in 1973, is one of ten national parks in mainland Greece and is located 30 kilometres (19 mi) north of the city of Ioannina in the northern part of the Pindus mountain range. It is named after the two major gorges of the area and encompasses 12,600 hectares of mountainous terrain, with numerous rivers, lakes, caves, deep canyons, dense coniferous and deciduous forest. The park is part of the Natura 2000 ecological network and one of UNESCO Geoparks and spans an elevation range from 550 to 2,497 meters. Over 100,000 people visit the park each year and take part in activities including rafting, canoe-kayaking, hiking and mountain biking.

Zagori, is a region and a municipality in the Pindus mountains in Epirus, in northwestern Greece. The seat of the municipality is the village Asprangeloi. It has an area of some 1,000 square kilometers and contains 46 villages known as Zagori villages, and is in the shape of an upturned equilateral triangle. Ioannina, the provincial capital, is at the southern point of the triangle, while the south-western side is formed by Mount Mitsikeli (1,810m). The Aoos river running north of Mt Tymphe forms the northern boundary, while the south-eastern side runs along the Varda river to Mount Mavrovouni (2,100m) near Metsovo. The municipality has an area of 989.796 km2. The population of the area is about 3,700, which gives a population density of 4 inhabitants per square kilometer, very sparse when compared to an average of 73.8 for Greece as a whole.

Iliochori is one of the Zagori villages in northwest Greece. It is located in the municipal unit of Tymfi in the northern part of the regional unit of Ioannina. According to a local legend, the village was founded as Rasciana, on the river of the same name. However, that site was abandoned because of a lack of drinking water, and the inhabitants scattered to found Iliochori and the nearby town of Laista. Iliochori was traditionally an agricultural village, with husbandry and cultivation of barley and vetch being among its primary areas of economic activity. Viticulture was also prominent, and the village produced a wine, Dobrovino, that gave it its original name. Caravans leaving from Iliochori carried products from the region to the Balkans for trade. The town suffered severe damage in both World War II and the Greek Civil War and lost a large portion of its population during the 1940s as a result. 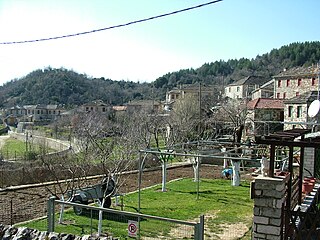 Papingo is a former community (1919-2010) in the Ioannina regional unit, Epirus, Greece. Since the 2011 local government reform it has become part of the municipality of Zagori, of which it is a municipal unit. The municipal unit has an area of 34.131 km2. It is located in the Vikos–Aoös National Park. 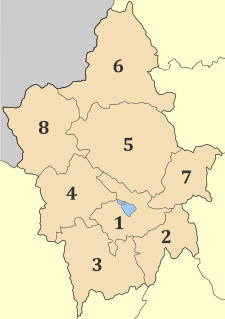 Ioannina is one of the regional units of Greece.

Vikos may refer to:

The Monastery of Saint Paraskevi is an abandoned monastery situated on the edge of Vikos Gorge, in the region of Zagori,, northwestern Greece. The monastery founded at 1413–1414, consists of a small stone-built chapel, the oldest preserved in Zagori, and offers panoramic views to the gorge. 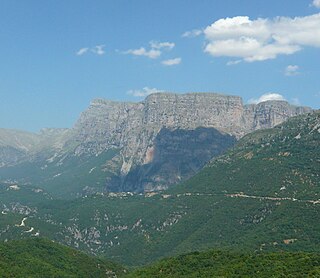 Tymfi or Tymphe, Timfi, also Tymphi is a mountain in the northern Pindus mountain range, northwestern Greece. It is part of the regional unit of Ioannina and lies in the region of Zagori, just a few metres south of the 40° parallel. Tymfi forms a massif with its highest peak, Gamila, at 2,497 m (8,192 ft). 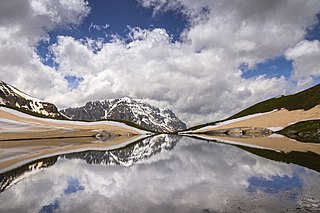 Drakolimni is the name of several alpine or sub-alpine lakes in northwestern Greece Epirus region: the ones in mountain Tymfi and Smolikas are the most widely known. According to local folktales the lakes used to be inhabited by dragons who fought each other by throwing pines and rocks and thus created the peculiar landscape and gave their names to the lakes. 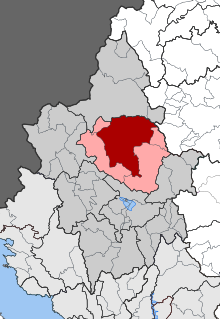 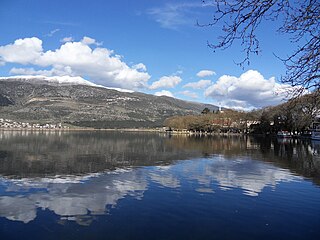 Vrysochori is one of the Zagori Aromanian (Vlach) villages (Zagorochoria), in the Ioannina regional unit, Greece. Vrysochori is in the Tymfi municipal unit, and is about 75 km (50 mi) from Ioannina.

Koukouli is a village of the Zagori region, in the municipal unit of Tymfi. It is situated at the southern end of the Vikos Gorge.

Kipoi is a village in the region of Zagori. It belongs to the municipal unit of Tymfi, Ioannina regional unit, Greece. The Greek name derives from the many gardens in the surrounding areas. The name "Bagia" is Slavic and means "warm place". The village has the lowest latitude of all Zagori village and is surrounded by rivers. It is built on a rocky hill, in the southern end of Vikos Gorge.

Monodendri is a village in the Ioannina regional unit in Greece. It is part of the municipal unit of Central Zagori in the Zagori region, and is located 41 kilometres (25 mi) north of the city of Ioannina. 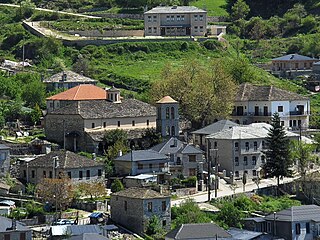 Skamneli is a village in the Zagori region, 54 km north of Ioannina. It is built in the fringes of mountain Tymfi, at a height of 1160 m.

Kapesovo is a village in the Zagori region, it is 43 km north of Ioannina. The name Kapesovo is Slavic and means garden. The village used to be more south near Baya (Kipi), where many vegetables were grown and it was called "Kapouska". It was later moved to its current position for health reasons. There is a big cliff next to the village called "Kapesios" and the name of the village might be related to it.

Vradeto is a village in the Greek Zagori region. It lies at a height of 1340m on Mt Tymphe in the Pindus mountain range. It is the highest of the 44 villages of Zagori.

Vikos doctors were folk healers or practical medical practitioners from the Greek area of Zagori in the 18-19th century.