Tsering Dorjee Bawa (Tibetan: ཚེ་རིང་རྡོ་རྗེ། born April 23, 1970) is a Tibetan actor, producer, musician and dancer. He acted in several remarkable films including the Oscar nominated film ‘Himalaya' [1] in 1999 and has created the original soundtrack with Michael Becker for 2009 Emmy Award-winning documentary ‘The Woman of Tibet - A Quiet Revolution’. [2] He was nominated twice for outstanding featured performance in play, male for his off-Broadway show, 'The Oldest Boy'.

He had worked on numerous ensemble art works with many renown world artists. He currently resides in Bay Area, California and teaches Tibetan music, conducts art workshops for the university students and professionals and takes acting assignments.

Tsering Dorjee was born in Toe Bawa in Ngari, Western Tibet. In 1986, he enrolled in the Tibetan Institute of Performing Arts, Dharamshala, India at the age of 16 to pursue his love for art and music. Graduating from the art school in 1994 with an advanced degree in Tibetan dance, music and opera. He obtained his master's degree in 2000 and continued working as an arts instructor for the institute.

To further pursue his passion for acting he attended acting training in France, The Netherlands, India and Barbizon International School of Acting and Modeling in San Francisco, USA.

In 2000, after graduating from the arts school he worked as an arts instructor and in-house artists for the Tibetan Institute of Performing Arts in Dharamshala, India .

In 1999, he acted in Oscar nominated movie ‘Himalaya’ alongside Lhakpa Tsamchoe, a French film directed by Eric Valli.

In 2009, he collaborated with notable composer Michael Becker and created the original soundtrack for the 2009 Emmy Award-winning documentary The Woman of Tibet - A Quiet Revolution.

He appeared in the off-Broadway show ‘The Oldest Boy’, by Sarah Ruhl at the Lincoln Center Theater in New York, which enhanced his acting career and got an opportunity to work with many theaters company Marin Theater Company, CA, San Diego Repertory Theater, CA and Jungle Theater, Minneapolis.

In 2008, he celebrated the Losar festival with a performance in Toronto, Ontario, Canada with Passang Lhamo. Later, he performed the play Tibet, A Year After at Oakland, California to celebrate the 73rd birthday of Tenzin Gyatso the 14th Dalai Lama.

Amongst his well-known songs is Mani Do Bum.

Recently, he has acted as the main protagonist for an independent feature film, ‘My Son Tenzin’ produced by Seykhar Films. [3]

He was nominated twice for an outstanding featured performance in play, male for ‘The Oldest Boy’ for the 2015 Craig Noel Awards from San Diego Theater.

In 2016 he received the TBA Award for Outstanding Choreography for ‘The Oldest Boy’.

Seven Years in Tibet is a 1997 American biographical war drama film directed by Jean-Jacques Annaud. It is based on Nazi party member and Austrian mountaineer Heinrich Harrer's 1952 memoir Seven Years in Tibet, about his experiences in Tibet between 1939 and 1951. Seven Years in Tibet stars Brad Pitt and David Thewlis, and has music composed by John Williams with a feature performance by renowned cellist Yo-Yo Ma. 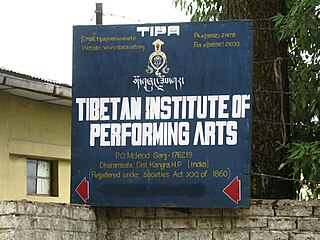 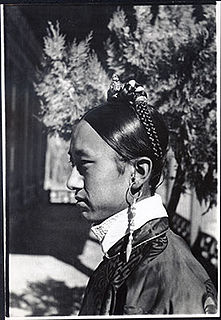 Lhalu Tsewang Dorje commonly known as Lhalu, Lhalu Se, or Lhalu Shape, was a Tibetan aristocrat and politician who held a variety of positions in various Tibetan governments before and after 1951. 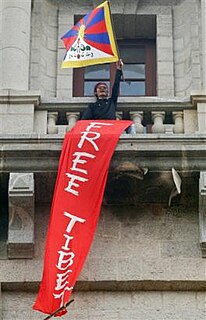 Tenzin Tsundue is a poet, writer and Tibetan refugee and activist. As of 2019 he has been taken into preventive custody, arrested or jailed 16 times for short durations for his activism by Indian authorities. When he was 22, he travelled to Tibet. However, he was arrested and sent back to India, "They told me I was born in India and so I did not belong to Tibet." 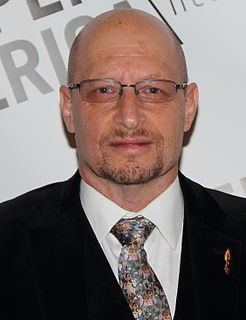 Elliot Sperling was one of the world's leading historians of Tibet and Tibetan-Chinese relations, and a MacArthur Fellow. He spent most of his scholarly career as an associate professor at Indiana University's Department of Central Eurasian Studies, with seven years as the department's chair. 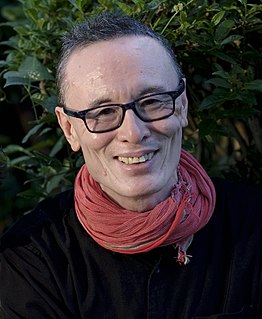 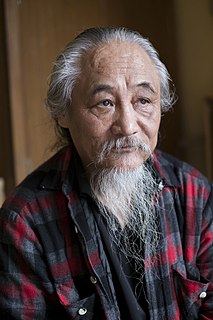 Bringing Tibet Home is a 2013 documentary film produced and directed by Tibetan filmmaker Tenzin Tsetan Choklay about Tibetan contemporary Artist Tenzing Rigdol's art piece "Our Land Our people". The film premiered at the 2013 Busan International Film Festival in South Korea. This is a Tibetan-language film.

Tashi Wangchuk is a Tibetan filmmaker who works for Voice of America, Tibetan Service as a TV Producer and host. Tashi in collaboration with his cousin/friend filmmaker, Tsultrim Dorjee established Seykhar Films in 2005 in Dehradun, India. Seykhar Films is now based in the San Francisco Bay Area, USA. Tashi studied filmmaking (MFA) under a Fulbright Scholarship from SUNY Buffalo. He also has a Masters in Economics from Dehradun, India. Earlier Tashi Wangchuk served at the prestigious Tibetan Institute of Performing Arts (TIPA) as a Public Relation Officer/Teacher from 2000 to 2002. It was primarily during this period that he is inspired by the arts and film-making. 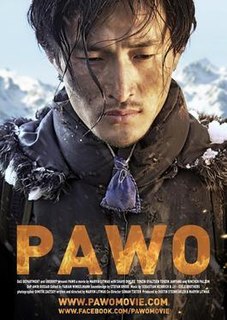 Pawo (Hero) is a 2016 Tibetan-language film by Marvin Litwak and Sonam Tseten, set in McLeod Ganj, chronicling the life of a young Tibetan refugee boy in India after escaping over Himalayas in search of freedom.

Tenzin Choegyal is a musician from Tibet.

Pema Dhondup Gakyil, who is professionally credited as Pema Dhondup, is a Tibetan film director and actor. He directed and produced We're No Monks (2004) and The Man from Kathmandu (2019), and he provided voiceovers for Tenzin in the Uncharted series of video games. He has resided in Los Angeles, California, since 2004. 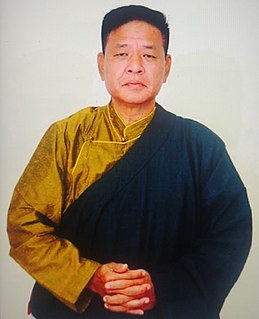