The Tsetsaut (Nisga'a language: Jits'aawit; in the Tsetsaut language: Wetaŀ or Wetaɬ) were an Athabaskan-speaking group whose territory was around the head of the Portland Canal, straddling what is now the boundary between the US state of Alaska and the Canadian province of British Columbia. The name T'set'sa'ut, meaning "those of the Interior", was used by the Nisga'a and Gitxsan in reference to their origin as migrants into the region from somewhere farther inland; their use of the term is not to the Tsetsaut alone but also can refer to the Tahltan and the Sekani.

Other than Nisga'a stories about them, little is known about the Tsetsaut other than bits of their language collected from two Tsetsaut slaves of the Nisga'a interviewed by Franz Boas in 1894. [1]

In 1830 their numbers were estimated to be up to 500, at which point they were living in the Behm Canal, where they had been friendly with the Sanya kwaan of the Tlingit and Lakweip at which point they moved to the Portland Canal. [2] Decimated by attacks and disease, the surviving Tsetsaut, estimated at 12 in 1895, came under the protection of the Nisga'a Eagle clan chief, Sim'oogit "Sganisim Sim'oogit" (Sim'oogit means "mountain chief"). [3] [4] Since the death of the remaining Tsetsaut, that chiefly lineage is now in possession of the Tsetsaut legacy in native law.

According to Teit, Tsetsaut territory "...lay in a strip from near Bradfield Canal and the Iskut across the streams flowing into Behm Canal perhaps to about the head of Boca de Quadra. They occupied all of the upper part of Portland Canal around the BC town of Stewart, and Salmon and Bear Rivers. They may have come down the canal as far as Maple Bay. They occupied all the White River and Meziadin Lake basins and one of their original headquarters, especially for salmon fishing, was at Meziadin Lake. They stretched across the head of the Skeena River above the Kuldo River over to Bear and Sustut lakes " [5] [6]

The Tsimshian are an indigenous people of the Pacific Northwest Coast. Their communities are mostly in coastal British Columbia and far southern Alaska, around Terrace and Prince Rupert in British Columbia, and Alaska's Annette Islands.

The Nass River is a river in northern British Columbia, Canada. It flows 380 km (240 mi) from the Coast Mountains southwest to Nass Bay, a sidewater of Portland Inlet, which connects to the North Pacific Ocean via the Dixon Entrance. Nass Bay joins Portland Inlet just south of Observatory Inlet.

Stewart is a district municipality at the head of the Portland Canal in northwestern British Columbia, Canada near the Alaskan panhandle. In 2011, its population was about 494. 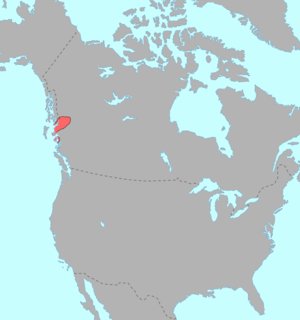 The Tsetsaut language is an extinct Athabascan language formerly spoken by the now-extinct Tsetsaut in the Behm and Portland Canal area of Southeast Alaska and northwestern British Columbia. Virtually everything known of the language comes from the limited material recorded by Franz Boas in 1894 from two Tsetsaut slaves of the Nisga'a, which is enough to establish that Tsetsaut formed its own branch of Athabaskan. It is not known precisely when the language became extinct. One speaker was still alive in 1927. The Nisga'a name for the Tsetsaut people is "Jits'aawit" 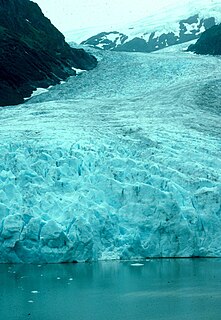 Bear Glacier Provincial Park is a provincial park in British Columbia, Canada. The park is 542 ha. in size and was established, effective 11 May 2000, by the Nisga'a Treaty, Appendix G-3.

The Laxsgiik is the name for the Eagle "clan" (phratry) in the language of the Tsimshian nation of British Columbia, Canada, and southeast Alaska. It is considered analogous or identical to identically named groups among the neighboring Gitksan and Nisga'a nations and also to lineages in the Haida nation. 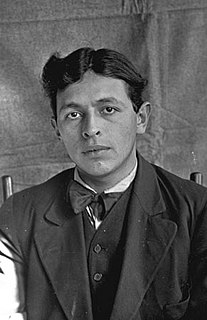 William Beynon (1888–1958) was a hereditary chief of the Tsimshian nation and an oral historian; he served as ethnographer, translator, and linguistic consultant to many anthropologists who studied his people.

Nisga'a Memorial Lava Bed Provincial Park is a provincial park in the Nass River valley in northwestern British Columbia, Canada, about 80 kilometres north of Terrace, and near the Nisga'a Villages of Gitlakdamix and Gitwinksihlkw.

Kitwanga or Gitwangak or Gitwangax is located where the Kitwanga River runs into the Skeena River in British Columbia. A long-standing village before contact, the village is within Gitwangak Indian Reserve No. 1.

The Nisga'a Final Agreement, also known as the Nisga'a Treaty, is a treaty that was settled between the Nisg̱a'a, the government of British Columbia, and the Government of Canada that was signed on 27 May 1998 and came into effect on May 11, 2000. As part of the settlement in the Nass River valley nearly 2,000 square kilometres of land was officially recognized as Nisg̱a'a, and a 300,000 cubic decameter water reservation was also created. Bear Glacier Provincial Park was also created as a result of this agreement. Thirty-one Nisga'a placenames in the territory became official names. The land-claim settlement was the first formal modern day comprehensive treaty in the province— the first signed by a First Nation in British Columbia since the Douglas Treaties in 1854 and Treaty 8 in 1899. The agreement gives the Nisga'a control over their land, including the forestry and fishing resources contained in it.

The Simpcw First Nation, formerly known as the North Thompson Indian Band, is a First Nations band government based in the Thompson Country of British Columbia, Canada. It is a member of the Shuswap Nation Tribal Council. It is a First Nations government of the Secwepemc (Shuswap) Nation, located in the Central Interior region of the Canadian province of British Columbia. The band's main community is at Chu Chua, British Columbia. Four of the five First Nation Reserves in Simpcw territory were designated on July 5, 1877 and the fifth was designated on February 24, 1916. The Shuswap language name for North Thompson Band's community and reserve is 'Simpcw'. 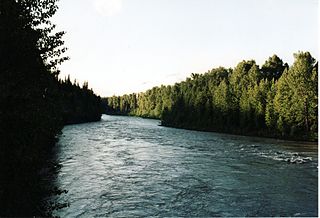 The Bell-Irving River is a tributary of the Nass River in northwestern British Columbia, Canada. It originates in the Sacred Headwaters region, and flows about 165 km (103 mi) south to the Nass River. It course lies between the Oweegee Range of the Skeena Mountains to the east and the Boundary Ranges of the Coast Mountains to the west.