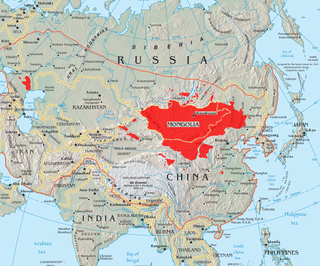 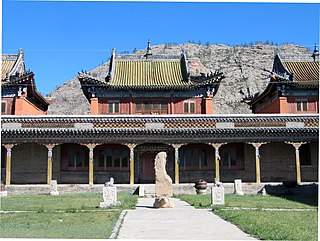 Tsetserleg, also transliterated as Cecerleg is the capital of Arkhangai Aimag (province) in Mongolia. It lies on the northeastern slopes of the Khangai Mountains, 360 miles (600 km) southwest of Ulaanbaatar. It has a population of 16,553, 16,618, 16,300.

Tsetserleg is a sum (district) of Arkhangai Province in central Mongolia.

The Orkhon River is a river in Mongolia. 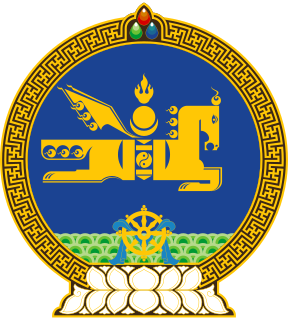 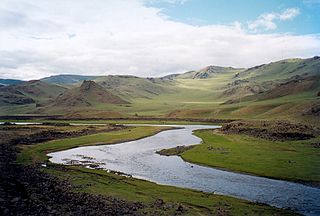 The Arkhangai Province or Arkhangai Aimag is one of the 21 aimags of Mongolia. It is located slightly west of the country's center, on the northern slopes of the Khangai Mountains.It is composed of 19 soums. 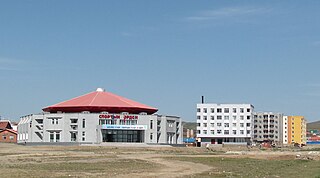 Arvaikheer, also spelt Arwaiheer – meaning "Barley Steppe" – is the capital of Övörkhangai Aimag (province) and one of the most central points of Mongolia. 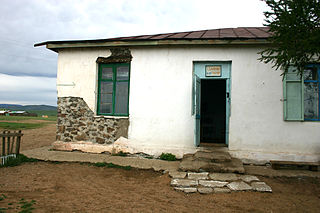 Erdenenmandal is a small town located 73 miles north of the Arkhangai Aimag capital Tsetserleg, as well as a sum of the province. 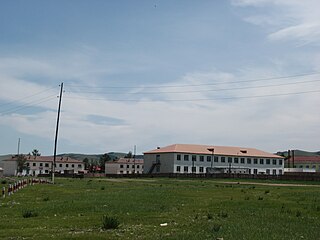 'Tüvshrüülekh is a sum (district) of Arkhangai Province in central Mongolia.

Battsengel is a sum (district) of Arkhangai Province in central Mongolia. Battsengel is home to approximately 3,842 inhabitants. The 12 Year Secondary School won an award for best school of Arkhangai Aimag in 2012.

Ögii nuur is a sum (district) in the east of Arkhangai Province in central Mongolia, near the confluence of the Tamir and Orkhon rivers. The sum is named after Ögii Lake. The administrative center is located some 100 km from Tsetserleg.

Tsagaannuur is a common place name in Mongolia:

Tsakhir is a sum (district) of Arkhangai Province in central Mongolia.

Shine-Ider is a sum of Khövsgöl aimag. The area is about 2,050 km², of which 1,700 km² are pasture. In 2000, the sum had 4348 inhabitants, mainly Khalkha. The sum center, officially named Erdenet, is located 123 km south-southeast of Mörön and 839 kilometers from Ulaanbaatar.

Tosontsengel is a sum of Zavkhan Province (aimag) in western Mongolia. It is the largest sum and sum centre in Zavkhan aimag after its capital.

The 1932 armed uprising was a revolt against the rule of the Mongolian People's Revolutionary Party (MPRP) and its "left course" directed by Soviet Bolsheviks and Comintern in the People's Republic of Mongolia. It covered the northwest part of the country and lasted from April–November 1932. The principal leaders were lamas. Main part of ordinary rebels consisted of common people but even many party members and the local bureaucracy joined the rebellion. The insurgents were inspired by rumours of support from the Panchen Lama and the Japanese. They were noted for a number of atrocities they committed, but the Mongolian troops sent with Soviet support to quell the rebellion engaged in more brutalities. More than 1500 people were killed. Special study revealed that this uprising corresponds to generally accepted criteria of the civil war. Suggestions that the uprising was inspired or supported by Japan or the 9th Panchen Lama were not confirmed by archival documents.

The Suvraga Khairkhan is a mountain of the Khangai Mountains range in the Tsenkher, Arkhangai Province in Mongolia. It has an elevation of 3,179 metres (10,430 ft) and is considered a regional sacred mountain.