Élisabeth Tshala Muana Muidikay, aliasTshala Muana, (born 13 May 1958, Élisabethville, (now Lubumbashi), Belgian Congo) is a singer and dancer from Congo-Kinshasa. She started her artistic career as a dancer for the musical band Tsheke Tsheke Love in 1977. She is famous for several songs such as "Karibu Yangu". She has won several awards on the national, continental and global scene. She has never been married.

Tshala Muana, the second of ten siblings, is the daughter of Amadeus Muidikayi, a soldier, and Alphonsine Bambiwa Tumba, a housewife.

In 1964, barely six years old, she lost her father, murdered in Watsha by the Ulelist maquis during the Congo crisis. She was raised by her mother, who died in 2005.

She has never been married. She dated a politician who is a married man in the 2000s, and she has marketed him as her husband ever since.

On 7 June 2020 she gave signs of life after rumours of her death were spread. [1] Since May 2020, Tshala Muana has been suffering the effects of a stroke.

Soukous is a genre of dance music from Congo-Kinshasa and Congo-Brazzaville. It derived from Congolese rumba in the 1960s and gained popularity in the 1980s in France. Although often used by journalists as a synonym for Congolese rumba, both the music and dance associated with soukous differ from more traditional rumba, especially in its higher tempo, longer dance sequences. Notable performers of the genre include African Fiesta, Papa Wemba and Pépé Kallé.

Arielle Dombasle is an American-born French singer, actress, director and model. Her breakthrough roles were in Éric Rohmer's Pauline at the Beach (1983) and Alain Robbe-Grillet's The Blue Villa (1995). Appearing in various works by renowned documentary filmmaker Chris Marker, including Sans Soleil (1983), Tokyo Days (1988), and The Owl's Legacy (1989). She also starred in the 1984 miniseries Lace and its 1985 sequel Lace II and appeared as a guest in Miami Vice. Since 1978 she has released twenty-one singles and ten albums and has directed four movies. 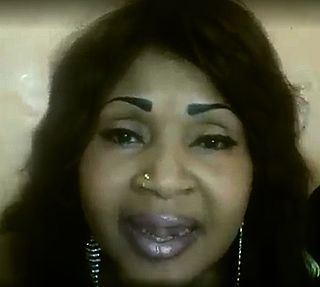 M'bilia Bel is a rumba and world music singer from the Democratic Republic of the Congo. She is known as the "Queen of Congolese and African Rumba". She rose to fame after first being discovered by Sam Manguana and later by Tabu Ley Rochereau who helped her gain confidence, master her powerful soprano voice, and achieve acclaim as one of the best Congolese female singers. Pascal-Emmanuel Sinamoyi Tabu, better known as Tabu Ley Rochereau, was a leading African rumba singer-songwriter from the Democratic Republic of the Congo. He was the leader of Orchestre Afrisa International, as well as one of Africa's most influential vocalists and prolific songwriters. Along with guitarist Dr Nico Kasanda, Tabu Ley pioneered soukous and internationalised his music by fusing elements of Congolese folk music with Cuban, Caribbean and Latin American rumba. He has been described as "the Congolese personality who, along with Mobutu, marked Africa's 20th century history." He was dubbed "the African Elvis" by the Los Angeles Times. After the fall of the Mobutu regime, Tabu Ley also pursued a political career. His musical career ran parallel to the other great Congolese rhumba bandleader and rival Franco Luambo Makiadi who ran the band TPOK Jazz throughout the 1960s, 1970s and '80s.

Samba Mapangala is a Congolese singer and bandleader who has been based in Kenya for most of his five-decade musical career, most notably there creating and leading Virunga, which has been one of the most popular bands in East Africa for more than 35 years.

Patience Marie Josephine Kama Dabany, also known by the names Marie Joséphine Kama and Josephine Bongo, is a Gabonese singer and musician. Dabany served as the First Lady of Gabon from 1967 to 1987. For nearly 30 years she was married to Omar Bongo Ondimba, who was President of Gabon from 1967 to 2009. After their divorce, she successfully pursued a career in music. She is the mother of the current President of Gabon, Ali Bongo Ondimba.

The 2007 Africa One Antonov An-26 crash occurred when a twin engine Antonov An-26, belonging to the Congolese air carrier Africa One, crashed and burned shortly after takeoff from N'djili Airport in Kinshasa, Democratic Republic of the Congo on October 4, 2007. The flight left N'djili at 10:43 local time bound for Tshikapa, a distance of 650 km to the east.

Awilo Longomba is a Congolese soukous musician. Since childhood, Awilo spent every single moment in the music scenes attending his father’s rehearsals. Very quickly his passion for music grew, and instead of going to classes, he started drumming for various groups of Kinshasa, including “l’orchestre de Lita Bembo“. At first a drummer in Viva la Musica, Stukas, Nouvelle Generation and Loketo, he left drumming for singing and released his first album Moto Pamba with help from Shimita, Ballou Canta, Dindo Yogo, Dally Kimoko, Sam Mangwana, Syran Mbenza and Rigo Star in 1995. Awilo has performed live concerts in Africa, Europe, and North America. after first moving to France in the 1980s, Awilo now lives in London, United Kingdom and is married to Paradis Kacharelle and they have a son called Lovy Believe Church Awilo Longomba.

Empire Bakuba is an influential soukous band that formed in Zaire in 1972. The name of the band refers to the Bakuba Kingdom; it is sometimes reported as Empire Bakuba du Grand Kalle, in honor of Grand Kalle, the "father of Congolese music", who was also bandleader Pepe Kalle's mentor. The band has never formally disbanded, although its activity has been scarce since Pepe Kalle's death.

Ndombe Opetum, popularly known as Pepe Ndombe, was an Odemba recording artist, composer and vocalist, in the Democratic Republic of the Congo (DRC). He was once a member of the seminal soukous band TPOK Jazz which dominated the Congolese music scene from the 1960s through the 1980s.

Adrienne Ekila Liyonda was a Zairean politician who served as ambassador to Belgium and was the country's first female Foreign minister.

Joseph Midiburo was a Congolese politician who served as the third President of the Chamber of Deputies of the Democratic Republic of the Congo. 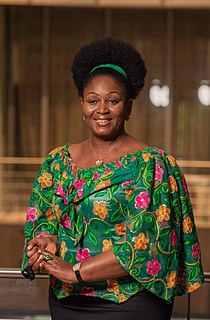 Colette Tshomba Ntundu is a politician from the Democratic Republic of Congo. She was elected national deputy for the constituency of Funa three times, in 2006, 2011 and 2018. 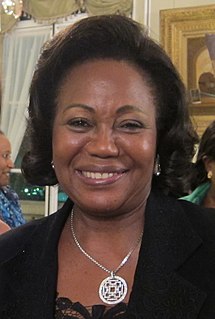 Antoinette Sassou Nguesso is a Congolese retired teacher and public figure who has held the role of First Lady of the Republic of the Congo since 1997 as the wife of President Denis Sassou Nguesso. She also held the position of First Lady from 1979 to 1992 during her husband's first presidential tenure.

Syran Mbenza is a guitarist, originally from the Congo, who has lived in Paris since about 1981. He has recorded and performed prolifically over five decades, including as a solo artist; as one of the four members of the popular soukous "supergroup" Les Quatre Étoiles; as a founding member of the acoustic, Congolese rumba revival band Kékélé; in other bands; and in support of numerous artists. He has been described as one of the greatest guitar players of Africa.

Marie Misamu, whose real name is Marie Misamu Ngolo, was a cantor, Congolese composer born November 16, 1974 in Kinshasa and died January 16, 2016 still in the same place.

L'Or Lemba-Mbongo is a Congolese singer–songwriter and cantor living in Kinshasa. She had made 7 albums during the course from 2003 to 2019.

Fifi Mukuna is a Congolese cartoonist and caricaturist.

Defao was a Congolese singer-songwriter. He was formerly a member of the prominent soukous groups Grand Zaiko Wawa and Choc Stars.