Tshering Choden or Tshering Chhoden may refer to:

Tshering Choden is an athlete from Bhutan. She competes in archery.

Tshering Choden is a Bhutanese politician who has been a member of the National Assembly of Bhutan, since October 2018.

Tashi Peljor is a Bhutanese archer. Peljor is a scholarship holder with the Olympic Solidarity program.

Princess Ashi Kesang Choden Wangchuck, is a member of the royal family of Bhutan. She is a daughter of the former King Jigme Singye Wangchuck and Queen Mother Ashi Tshering Pem, one of the former king's four wives, all of whom are sisters and held the title 'queen consort'. She is a half-sister of the current Druk Gyalpo Jigme Khesar Namgyel Wangchuck, who became king following the abdication of his father Jigme Singye Wangchuck on 9 December 2006. 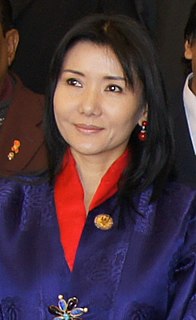 Queen Mother Sangay Choden is one of the four wives and queens of Bhutanese king Jigme Singye Wangchuck, who ruled in Bhutan from 1972 until his abdication in 2006. She is the Queen Mother of Bhutan.

Wangchuk or Wangchuck is a given name and surname. Notable people with the name include:

The Bhutan Olympic Committee was created in November 1983 with the King of Bhutan as its President, with its headquarters at Thimphu, Bhutan. Following this recognition, Bhutan participated for the first time in the 1984 Olympic Games held in Los Angeles when three men and three women archers represented Bhutan.

Prince Dasho Ugyen Jigme Wangchuck is a member of the royal family of Bhutan and is one of the sons of Jigme Singye Wangchuck and Queen Mother Ashi Tshering Pem.

Bhutan competed at the 2012 Summer Olympics in London, from 27 July to 12 August 2012. This marked the nation's eighth appearance at the Summer Olympics since its debut in the 1984 Summer Olympics, and the first in which the nation competed in a sport other than archery. The Bhutanese delegation included archer Sherab Zam and shooter Kunzang Choden. Zam was the flag bearer for both the opening and closing ceremonies. Neither of Bhutan's athletes progressed beyond the first round of their events. Bhutan was one of only two countries to have a female-only team at the 2012 Games.

Kunzang Choden is a Bhutanese sports shooter. She competed in the Women's 10 metre air rifle event at the 2012 Summer Olympics. She currently is the coach of Olympic qualifier Lenchu Kunzang.

Pem Tshering, is an archer who internationally represented Bhutan

Dorji is a Tibetan and Bhutanese given name and surname.

Choden is a Bhutanese name that may refer to

BHUTAN-1 is a Bhutanese nanosatellite. It is the first satellite of Bhutan.

Lotay Tshering is a Bhutanese doctor-turned-politician who is the current Prime Minister of Bhutan, in office since 7 November 2018. He is also the president of Druk Nyamrup Tshogpa since 14 May 2018.

Tandi Dorji is a Bhutanese politician who has been Foreign Minister for Bhutan since November 2018. He has been a member of the National Assembly of Bhutan, since October 2018.

Loknath Sharma is a Bhutanese politician who has been Minister for Economic Affairs since November 2018. He has been a member of the National Assembly of Bhutan, since October 2018.

Gyambo Tshering is a Bhutanese politician who has been a member of the National Assembly of Bhutan, since October 2018.