Tsikalia (in Greek "Τσικαλιά") is a village of the Mani peninsula in Laconia in Southern Greece. It is very near to Cape Matapan, which is the southernmost point of mainland Greece and Europe. It consists of Pano Chora and Kato Chora. It belongs to the municipality of East Mani with its administrative capital at Gytheio and its historical capital at Areopoli. Its main church, in the centre of the village, is Agia Kyriaki. Its cemetery is Konstadounia with the church Agios Konstadinos inside it. The community of Tsikalia consists of the villages Tsikalia, Moudanistika, Kotrafi, Sychalasmata and Xerolakos. 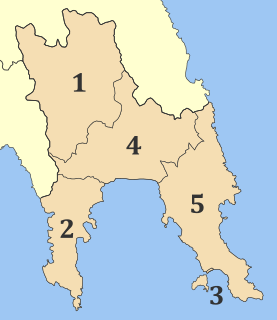 Laconia is a region of Greece in the southeastern part of the Peloponnese peninsula. Its administrative capital is Sparta. The word laconic is derived from the name of the region by analogy—to speak in a concise way, as the Spartans were reputed by the Athenians to do. 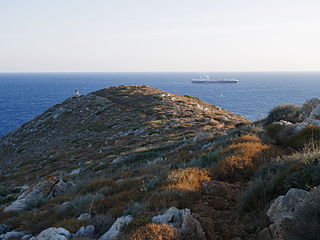 East Mani is a municipality in Laconia, Peloponnese, Greece. Its seat of administration is the town Gytheio. The municipality covers the southeastern part of the Mani region. It is a mountainous and rocky area. Its economy relies on fishing, olive oil and tourism. 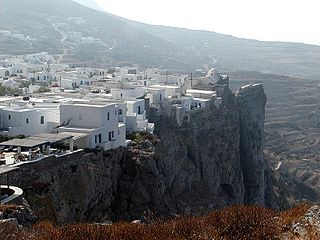 Folegandros is a small Greek island in the Aegean Sea that, together with Sikinos, Ios, Anafi and Santorini, forms the southern part of the Cyclades. Its surface area is 32.216 square kilometres (12.439 sq mi) and it has 765 inhabitants. It has three small villages, Chora, Karavostasis, and Ano Meria, which are connected by a paved road. Folegandros is part of the Thira regional unit.

Chora may refer to: 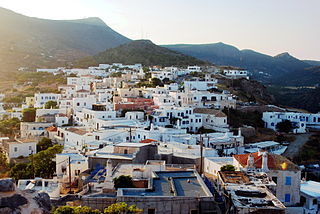 Kythira is an island in Greece lying opposite the south-eastern tip of the Peloponnese peninsula. It is traditionally listed as one of the seven main Ionian Islands, although it is distant from the main group. Administratively, it belongs to the Islands regional unit, which is part of the Attica region. 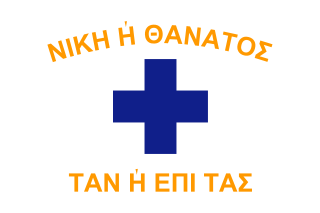 The Mani Peninsula, also long known by its medieval name Maina or Maïna (Μαΐνη), is a geographical and cultural region in Greece that is home to the Maniots, who claim descendancy from the ancient Dorians and Spartans. The capital cities of Mani are Gytheio and Areopoli. Mani is the central peninsula of the three which extend southwards from the Peloponnese in southern Greece. To the east is the Laconian Gulf, to the west the Messenian Gulf. The peninsula forms a continuation of the Taygetos mountain range, the western spine of the Peloponnese.

Mykonos is a Greek island, part of the Cyclades, lying between Tinos, Syros, Paros and Naxos. The island spans an area of 85.5 square kilometres (33.0 sq mi) and rises to an elevation of 341 metres at its highest point. There are 10,134 inhabitants, most of whom live in the largest town, Mykonos, which lies on the west coast. The town is also known as Chora. 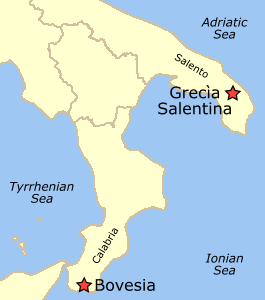 Bovesia, otherwise known as Grecìa Calabra, is one of the two remaining Griko-speaking areas in southern Italy, the other being Grecìa Salentina. It is located at the tip of Calabria, near Reggio, and consists of nine villages. Its population is significantly smaller than the one of Grecìa Salentina. 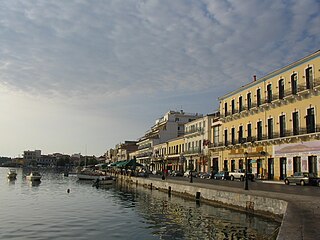 Gytheio or Gythio, also the ancient Gythium or Gytheion, is a town on the eastern shore of the Mani Peninsula, and a former municipality in Laconia, Peloponnese, Greece. Since the 2011 local government reform it is part of the municipality East Mani, of which it is a municipal unit. The municipal unit has an area of 197.313 km2. It was the seaport of Sparta, some 40 kilometres north. Gytheio is the site of ancient Cranae, a tiny island where according to legend Paris of Troy and Helen from Sparta spent their first night together before departing for Troy, thus igniting the Trojan War. 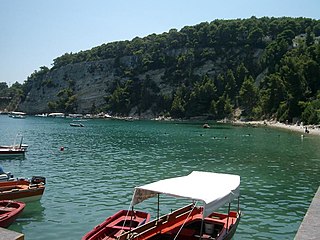 Alonnisos, also transliterated as Alonissos or Alonisos, is a Greek island in the Aegean Sea. After Skiathos and Skopelos it is the third member of the Northern Sporades. It is 3 km (2 mi) (2 nm) E of the island of Skopelos. Alonnisos is also the name of a village on the island, as well as the municipality that encompasses the island and the village. 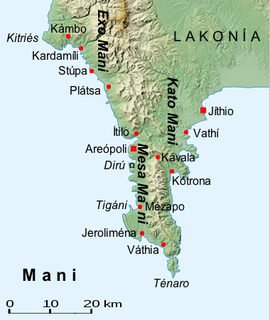 The Ottoman–Egyptian Invasion of Mani was a campaign during the Greek War of Independence that consisted of three battles. The Maniots fought against a combined Egyptian and Ottoman army under the command of Ibrahim Pasha of Egypt.

The Maniots or Maniates are the inhabitants of the Mani Peninsula, Laconia, in the southern Peloponnese, Greece. They were also formerly known as Mainotes and the peninsula as Maina. Maniots are described as descendants of the ancient Dorian population of the Peloponnese and as such related to the ancient Spartans. The terrain is mountainous and inaccessible, and the regional name "Mani" is thought to have meant originally "dry" or "barren". The name "Maniot" is a derivative meaning "of Mani". In the early modern period, Maniots had a reputation as fierce and proudly independent warriors, who practiced piracy and fierce blood feuds. For the most part, the Maniots lived in fortified villages where they defended their lands against the armies of William II Villehardouin and later against those of the Ottomans. 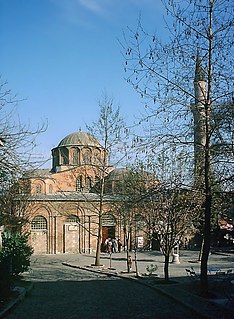 The Church of the Holy Saviour in Chora is a medieval Byzantine Greek Orthodox church preserved as the Chora Museum in the Edirnekapı neighborhood of Istanbul. The neighborhood is situated in the western part of the municipality (belediye) of the Fatih district. In the 16th century, during the Ottoman era, the church was converted into a mosque; it became a museum in 1948. The interior of the building is covered with some of the oldest and finest surviving Byzantine mosaics and frescoes; they were uncovered and restored after the building was secularized and turned into a museum.

Schoinoussa or Schinoussa is an island and a former community in the Cyclades, Greece. Since the 2011 local government reform it is part of the municipality Naxos and Lesser Cyclades, of which it is a municipal unit. It lies south of the island of Naxos, in the Lesser Cyclades group, between the island communities of Irakleia and Koufonisia. The population was 256 inhabitants at the 2011 census. Its land area is 8.512 square kilometres (3.29 sq mi).

Myrsini is a village and a community in the municipality East Mani, Laconia, southern Greece. The community consists of the villages Myrsini and Profitis Ilias. The villages lie on the southern slopes of the Taygetus mountain range, in the Mani Peninsula at an altitude of 400m to 500m near the town of Gytheio.

Exo Chora is a village and a community on Zakynthos island, Greece. It is situated near the rugged west coast of the island, 2 km south of Maries and 19 km west of Zakynthos (city). The community consists of the villages Exo Chora and Kampi.

Palaio Loutro is a small mountain village in Messenia, Peloponnese, Southern Greece. It is located a few kilometres from Chora, the site of Nestor's Palace, and the seaside port of Pylos. Palaio Loutro means "old bath" in reference to the river that runs between the village and a mountain the locals refer to as "o koufieros".

Chora is a small town in the western part of Messinia, in the Peloponnese region of southern Greece. With a population of 3.454 inhabitants, it is the largest settlement in the municipality of Pylos-Nestoros and the fifth largest settlement in Messinia. Chora is renowned for its long history. It houses an archeological museum and it is located 3 kilometers away from the Palace of Nestor. 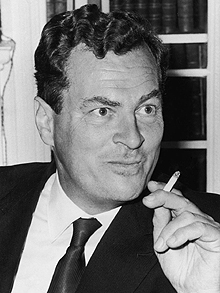 Sir Patrick Michael Leigh Fermor, DSO, OBE, also known as Paddy Fermor, was a British author, scholar, soldier and polyglot who played a prominent role behind the lines in the Cretan resistance during the Second World War. He was widely regarded as Britain's greatest living travel writer during his lifetime, based on books such as A Time of Gifts (1977). A BBC journalist once described him as "a cross between Indiana Jones, James Bond and Graham Greene." The Patrick Leigh Fermor Society was formed in 2014.