Tsikhisdziri is a village in the Kobuleti Municipality, Autonomous Republic of Adjara, Georgia, on the Black Sea coast, 8 km south of the town of Kobuleti. Tsikhisdziri is home to an archaeological site and ruins of a Late Antique fortified town, which is identified by mainstream scholarship with the Roman-built city-fortress of Petra.

Dusheti is a town in Georgia, the administrative center of Dusheti Municipality, situated in the Mtskheta-Mtianeti region, 54 km northeast of the nation’s capital of Tbilisi. 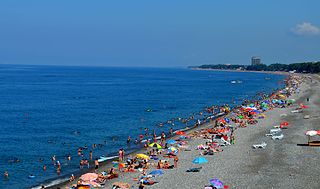 Kobuleti is a town in Adjara, western Georgia, situated on the eastern coast of the Black Sea. It is the seat of Kobuleti Municipality and a seaside resort, visited annually by Georgians and many former Soviet Union residents. It is especially popular with Armenian tourists.

Pkhovi, also known as Pkhoet'i (ფხოეთი), is a medieval term for the mountainous district in northeast Georgia comprising the latter-day provinces of Pshavi and Khevsureti along the upper reaches of the Aragvi, and in three alpine valleys just north of the main crest of the Greater Caucasus. Its inhabitants – the Pkhovians – were a tribe of Georgian highlanders known for their warlike character and frequent disobedience to the royal authority.

Pasanauri is a small town (daba) in Georgia, situated in the Dusheti district, Mtskheta-Mtianeti region. 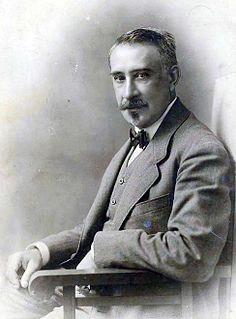 Giorgi "Gigo" Ivanes dze Gabashvili was a Georgian painter and educator. One of the earliest Georgian representatives of the Realist School, his work is known for covering a wide range of subjects, landscapes and scenes of everyday life through orientalist lens. Although not widely known in the West, Gabashvili's paintings are highly valued - the artist's late 19th century painting The Bazaar in Samarkand, originally commissioned by Charles Richard Crane, sold for $1.36 million dollars at Christie's in 2006.

Bodorna is a small village in Georgia, situated on the S3 highway (Georgia) originally the Georgian Military Road, 8 km from the town of Dusheti, Mtskheta-Mtianeti region, in the east of the country.

Zhinvali is a townlet in Georgia, Dusheti Municipality, on river Aragvi. It has one of the largest hydroelectric power stations in Georgia.

Dusheti is a municipality of Georgia, in the region of Mtskheta-Mtianeti. Its main town is Dusheti.

Aragvispiri is a village in north-eastern Georgia. It is located in the Dusheti District, Mtskheta-Mtianeti region. 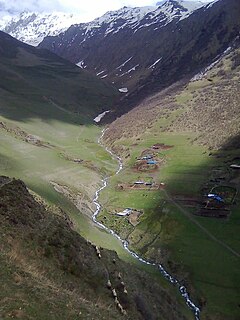 Khone-Khonischala are two villages settled by the Shetekauri’s family. Villages are located in Dusheti District on the northern slope of Tushet-Khevsusreti part of the Caucasus mountain range, at 1200-1300 meter above the sea level, 138 km distance from Dusheti.

The Darchidze is a Georgian family name from the Adjara region in the south-western Georgia.

Bazaleti is a historical area in eastern Georgia, located around the modern-day town of Dusheti, where a village and a lake called Bazaleti can be found.

The Nogaideli is a Georgian family name from the Adjara region in the south-western Georgia.

Abanoskhevi is a village in Mtskheta-Mtianeti region, Georgia. It is part of the Lapanaantkari commune, Dusheti municipality, with the population of 471, mostly (97%) ethnic Georgians, as of the 2002 census.

Kobiaantkari is a village in Georgia, situated in the dusheti district, Mtskheta-Mtianeti region, in about 1 km south from town dusheti.

Petra was a fortified town on the eastern Black Sea coast, in Lazica in what is now western Georgia. In the 6th century, under the Byzantine emperor Justinian I, it served as an important Eastern Roman outpost in the Caucasus and, due to its strategic location, became a battleground of the 541–562 Lazic War between Rome and Sasanian Persia (Iran). Mainstream scholarly opinion identifies Petra with a ruined settlement of Late Antiquity at the village of Tsikhisdziri in Adjara, southwestern Georgia.

Kobuleti Managed Reserve is a protected area in Kobuleti Municipality, Adjara region of Georgia along the Black Sea coast in the northern part of the resort town Kobuleti. Kobuleti Protected Areas were established in 1998 to preserve unique wetland ecosystems recognized by the Ramsar Convention.

Asa Managed Reserve is a protected area in the Dusheti Municipality, Mtskheta-Mtianeti region of Georgia in historical Khevsureti. It protects flora and fauna in highlands with several glaciers.

Bodorna Rock Columns Natural Monument is a rock pillar with a height of 15 m and diameter 4 m near village Bodorna of Dusheti Municipality, Mtskheta-Mtianeti Georgia at a distance of 70-80 m from the S3 highway (Georgia) at 813 m above sea level. Natural monument is located approximately 150-200 m from Bodorna Church of Saint Virgin Mary built in the XVII century and is overlooking the Aragvi valley from the river right bank on the slopes of eastern exposure. Locally this deemed natural tower is known as Tsotsola Rock and rumored to have some resemblance with figure of the Christian monk.