Tsimintiri, also known as Koimitiri, is a small, uninhabited islet in the Cyclades islands of the southern Aegean. [1] Tsimintiri is located between the islands of Antiparos and Despotiko. [2] The strait that separates all three islands is no more than 1 metre (3 ft) deep, so it is believed that the islands were connected as a single landmass in Classical times. [3] [4]

Archaeologists have discovered grave sites on the island, which may be the reason for its alternate name, Koimitiri, meaning "resting place." [5]

The Cyclades are an island group in the Aegean Sea, southeast of mainland Greece and a former administrative prefecture of Greece. They are one of the island groups which constitute the Aegean archipelago. The name refers to the islands around the sacred island of Delos. The largest island of the Cyclades is Naxos, however the most populated is Syros. 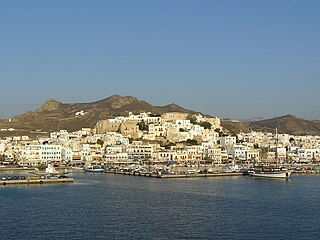 Naxos is a Greek island and the largest of the Cyclades. It was the centre of archaic Cycladic culture. The island is famous as a source of emery, a rock rich in corundum, which until modern times was one of the best abrasives available.

Sir Barrington Windsor Cunliffe,, known as Barry Cunliffe, is a British archaeologist and academic. He was Professor of European Archaeology at the University of Oxford from 1972 to 2007. Since 2007, he has been an Emeritus Professor.

Santa Cruz Island is located off the southwestern coast of Ventura, California, United States. It is the largest island in California and largest of the eight islands in the Channel Islands archipelago and Channel Islands National Park. Forming part of the northern group of the Channel Islands, Santa Cruz is 22 miles (35 km) long and 2 to 6 miles wide with an area of 61,764.6 acres (249.952 km2).

Antiparos is a small island in the southern Aegean, at the heart of the Cyclades, which is less than one nautical mile (1.9 km) from Paros, the port to which it is connected with a local ferry. Saliagos island is the most ancient settlement in the Cyclades, and Despotiko, an uninhabited island in the southwest of Antiparos, is a place of great archaeological importance. 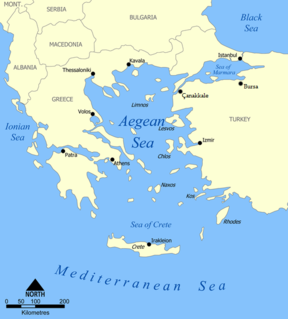 The Sea of Crete, or Cretan Sea, is a sea, part of the Aegean Sea, located in its southern extremity, with a total surface area of 45,000 km2 (17,000 sq mi). The sea stretches to the north of the island of Crete, east of the islands of Kythera and Antikythera, south of the Cyclades, and west of the Dodecanese islands of Rhodes, Karpathos and Kassos. The bounding sea to the west is the Ionian Sea. To the northwest is the Myrtoan Sea, a subdivision of the Mediterranean Sea that lies between the Cyclades and Peloponnese. To the east-southeast is the rest of the Mediterranean Sea, sometimes credited as the Levantine Sea. Across the island of Crete, to the opposite shore of it begins the Libyan Sea. Ferry routes to and from Piraeus and Heraklion, as well as the southern islands of the Aegean and the Dodecanese, run in this area.

Keros (Greek: Κέρος; anciently, Keria or Kereia is an uninhabited Greek island in the Cyclades about 10 km southeast of Naxos. Administratively it is part of the community of Koufonisia. It has an area of 15 km2 and its highest point is 432 m. It was an important site to the Cycladic civilization that flourished around 2500 BC. It is now forbidden to land in Keros.

Despotikó, anciently, Prepesinthus or Prepesinthos, is a small, uninhabited Greek island in the Cyclades. It is situated west of the island of Antiparos, and east of the smaller island of Strongyli.

The low tells at Abu Salabikh, around 20 km (12 mi) northwest of the site of ancient Nippur in Al-Qādisiyyah Governorate, Iraq mark the site of a small Sumerian city state of the mid third millennium BCE, with cultural connections to the cities of Kish, Mari and Ebla. Its contemporary name is uncertain: perhaps this was Eresh. Kesh was suggested by Thorkild Jacobsen before excavations began. The Euphrates was the city's highway and lifeline; when it shifted its old bed, in the middle third millennium BCE, the city dwindled away. Only eroded traces remain on the site's surface of habitation after the Early Dynastic Period. The site consists of several mounds, the 12 hectare wall enclosed Main, the 10 hectare Uruk, the West, and the 8 hectare South.

Ancient Kellis, now known as Ismant el-Kharab, was a village in Upper Egypt during the Hellenistic Period, Roman Period, and Byzantine period. It was located about 2.5 kilometers (1.6 mi) east-southeast of present-day Ismant in the Dakhleh Oasis, and about 11 kilometers (6.8 mi) northeast of Mut, which is the capital of the oasis. In ancient times, Mut was called Mothis, and thus Kellis was in the Mothite nome.

Monte d'Accoddi is a Neolithic archaeological site in northern Sardinia, located in the territory of Sassari. The site consists of a massive raised stone platform thought to have been an altar. It was constructed by the Ozieri culture or earlier, with the oldest parts dated to around 4,000–3,650 BC. 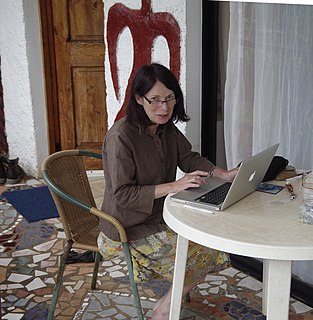 The Joukowsky Institute for Archaeology and the Ancient World is an interdisciplinary center at Brown University focused on research and teaching of archaeology, with an emphasis on the archaeology and art of the ancient Mediterranean, Egypt, and the Near East. Brown's undergraduate and graduate programs in archeology are organized through the institute.

Null Island is the name used to refer to the point on the Earth's surface where the Prime Meridian and the equator intersect, at zero degrees latitude and zero degrees longitude. Using the WGS84 datum, this point is located in international waters in the Gulf of Guinea, in the Atlantic Ocean, off the coast of West Africa. The point is marked by Soul buoy, a permanently-moored weather buoy.

Bozyazı Island is a small Mediterranean island in Turkey.

Pyletown is an unincorporated community in southwest Stoddard County, in the U.S. state of Missouri. The community is on Missouri Route H approximately six miles southwest of Dexter. Otter Lake in the Otter Slough Conservation Area is five miles west of the community.

Rebecca Jane Sweetman is Professor of Ancient History and Archaeology at the University of St Andrews. Sweetman is known in particular for her work on the archaeology of Roman and Late Antique Greece.

Erika Hagelberg is a British Evolutionary geneticist and Professor of Biosciences at the University of Oslo. She works on ancient DNA and pioneered a means to extract DNA from bones. Her research has applications in evolutionary biology and forensic science.

Kharaneh IV is an archaeological site in Jordan. The site contains evidence of human activity dating to the Late Pleistocene. Its main period of occupation was 18,900 to 16,600 BC.

Charles William Justin Hanbury-Tracy is a scholar and heritage consultant on the history and development of medieval British and European continental church furniture. He publishes under the name of Charles Tracy.