Tsimiski Street (Greek : Οδός Τσιμισκή, Odós Tsimiskí) is a major avenue in Thessaloniki, the second-largest city in Greece. It starts from the area of the Thessaloniki International Fair grounds, between Aggelaki Street and Nikolaou Germanou Street and ends in the crossroad with Ionos Dragoumi Street, on the western side of the city centre. Tsimiski Street was named after the Byzantine Emperor, Ioannis Tzimiskis and is nowadays one of the busiest streets in Thessaloniki's city center and the country. The busiest point of Tsimiski Street is its crossroad with Aristotelous Square which is a major meeting-point for Thessalonians, also forming a cultural axis with Aristotelous Square.

Prior to the Balkan Wars and the acquisition of Thessaloniki by Greece, the road that eventually became Tsimiski Street was called "the second parallel", a reference to its location being the second street to be built parallel to the city's waterfront, the other being Proxenou Koromila Street. [1] Before 1890, the street connected the two sides of Thessaloniki, from the eastern city walls to the west. [1] In 1913, when the city was in Greek hands, the street was then renamed after Ioannis Tsimiskis, a Byzantine Emperor notable for his struggles against Bulgarians. [1] The choice of name was the result of Greek-Bulgarian tensions at the time in regards to who would eventually win the city of Thessaloniki after the Balkan Wars. [1]

The most prominent features of Tsimiski street are the hundreds of various fashion shops, boutiques, high end international department stores and Fokas, the biggest Greek department store in the city centre. Tsimiski Street is also home to the Plateia Center Mall, the largest shopping mall in the city centre of Thessaloniki, which contains the Plateia Assos Odeon multiplex and has facilities from bars, restaurants, a virgin music megastore to fitness centers. The mall also houses the United States Consulate in Thessaloniki, as well as the liaison office of the Republic of North Macedonia.

The buildings along Tsimiski street house many of the city's major offices, ranging from financing, advertising, law and engineering firms. The western end of the street is also home to the city's financial district, with the building of the central offices of the Bank of Greece located there and regarded as one of the most imposing buildings in the city. Other banks that have their central offices for Thessaloniki and northern Greece on Tsimiski Street, include Piraeus Bank, and previously the Bank of Macedonia and Thrace. The Thessaloniki YMCA is located at the start of Tsimiski Street, on the intersection with Nikolaou Germanou Street.

Tsimiski street was designed as a four-lane one-way avenue that crossed the entire length of the city center of Thessaloniki. The design proved effective, but with the rise in the number of cars in Thessaloniki in recent years, it has become congested. A bus lane has also been added recently to facilitate faster bus transport by the Thessaloniki Urban Transport Organization, which has made matters worse in terms of traffic. The under-construction Thessaloniki Metro will relieve some of the congestion on Tsimiski Street. 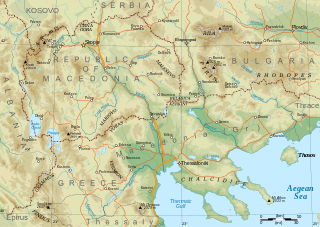 Macedonia is a geographical and historical region of the Balkan Peninsula in Southeast Europe. Its boundaries have changed considerably over time; however, it came to be defined as the modern geographical region by the mid 19th century. Today the region is considered to include parts of six Balkan countries: larger parts in Greece, North Macedonia, and Bulgaria, and smaller parts in Albania, Serbia, and Kosovo. It covers approximately 67,000 square kilometres (25,869 sq mi) and has a population of 4.76 million. 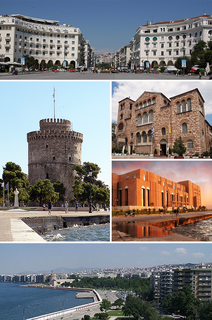 Thessaloniki, also known as Thessalonica, Saloniki or Salonica is the second-largest city in Greece, with over 1 million inhabitants in its metropolitan area, and the capital of the geographic region of Macedonia, the administrative region of Central Macedonia and the Decentralized Administration of Macedonia and Thrace. It is also known in Greek as η Συμπρωτεύουσα, literally "the co-capital", a reference to its historical status as the Συμβασιλεύουσα or "co-reigning" city of the Byzantine Empire alongside Constantinople. 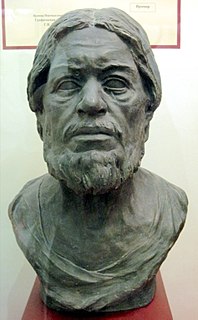 Samuel was the Tsar (Emperor) of the First Bulgarian Empire from 997 to 6 October 1014. From 977 to 997, he was a general under Roman I of Bulgaria, the second surviving son of Emperor Peter I of Bulgaria, and co-ruled with him, as Roman bestowed upon him the command of the army and the effective royal authority. As Samuel struggled to preserve his country's independence from the Byzantine Empire, his rule was characterized by constant warfare against the Byzantines and their equally ambitious ruler Basil II. 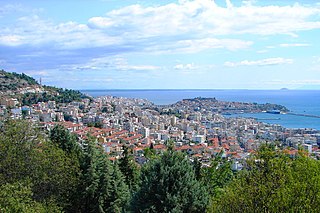 Kavala is a city in northern Greece, the principal seaport of eastern Macedonia and the capital of Kavala regional unit.

Kastoria is a city in northern Greece in the region of Western Macedonia. It is the capital of Kastoria regional unit, in the geographic region of Macedonia. It is situated on a promontory on the western shore of Lake Orestiada, in a valley surrounded by limestone mountains. The town is known for its many Byzantine churches, Byzantine and Ottoman-era domestic architecture, its lake and its fur clothing industry. 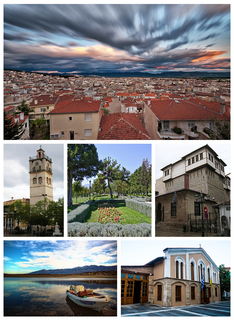 Kozani is a city in northern Greece, capital of Kozani regional unit and of West Macedonia region. It is located in the western part of Macedonia, in the northern part of the Aliakmonas river valley. The city lies 710 metres above sea level, 15 kilometres northwest of the artificial lake Polyfytos, 120 km south-west of Thessaloniki, between the mountains Pieria, Vermio, Vourinos and Askio. The population of the Kozani municipality is over 70,000 people. The climate of the area is continental with cold and dry winters, and hot summers.

Plateia or Platia (πλατεία) is the Greek word for town square. Most Greek and Cypriot cities have several town squares which are a point of reference in travelling and guiding. In traditional societies like villages and provincial communities, plateies are the central places for feasts, celebrations, events and meetings. 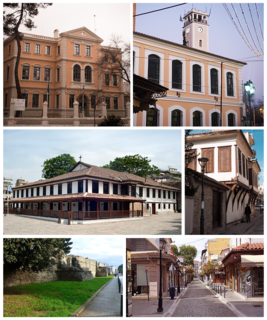 Komotini is a city in the region of East Macedonia and Thrace, northeastern Greece. It is the capital of the Rhodope. It was the administrative centre of the Rhodope-Evros super-prefecture until its abolition in 2010, by the Kallikratis Plan. The city is home to the Democritus University of Thrace, founded in 1973. Komotini is home to a sizeable Turkish originated, Turkish speaking Muslim minority. They were excluded from the population exchange of 1923. 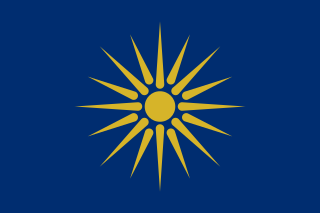 Macedonia is a geographic and former administrative region of Greece, in the southern Balkans. Macedonia is the largest and second-most-populous Greek geographic region, with a population of 2.36 million in 2020. It is highly mountainous, with most major urban centres such as Thessaloniki and Kavala being concentrated on its southern coastline. Together with Thrace, and sometimes also Thessaly and Epirus, it is part of Northern Greece. Greek Macedonia encompasses entirely the southern part of the wider region of Macedonia, making up 51% of the total area of that region. Additionally, it forms part of Greece's borders with three countries: Bulgaria to the northeast, North Macedonia to the north, and Albania to the northwest. 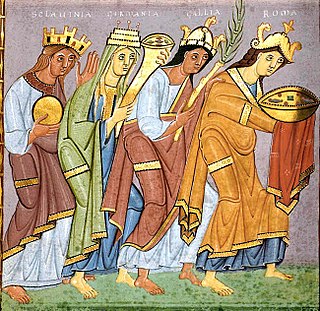 The Sclaveni or Sklabenoi were early Slavic tribes that raided, invaded and settled the Balkans in the Early Middle Ages and eventually became known as the ethnogenesis of the South Slavs. They were mentioned by early Byzantine chroniclers as barbarians having appeared at the Byzantine borders along with the Antes, another Slavic group. The Sclaveni were differentiated from the Antes and Wends ; however, they were described as kin. Eventually, most South Slavic tribes accepted Byzantine suzerainty, and came under Byzantine cultural influence. The term was widely used as general catch-all term until the emergence of separate tribal names by the 10th century. 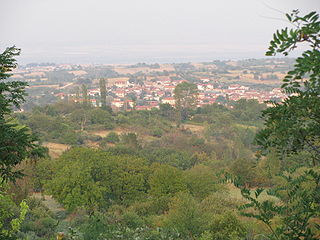 Goumenissa is a small traditional town in the Kilkis regional unit, Central Macedonia, Greece. It was the capital of the former Paionia Province. Since the 2011 local government reform it is part of the municipality Paionia, of which it is a community and a municipal unit. The municipal unit has an area of 208.949 km2. The 2011 census recorded 3,609 residents in the community and 6,130 residents in the municipal unit. The town sits on the southeastern part of the Paiko mountain range. Located 69 km northwest of Thessaloniki, 539 km north of Athens and 20 km north of Pella, the ancient capital of the kingdom of Macedon. Goumenissa is the seat of the Greek Orthodox diocese of Goumenissa, Axioupoli and Polykastro.

Aristotelous Square is the main city square of Thessaloniki, Greece and is located on Nikis avenue, in the city center. It was designed by French architect Ernest Hébrard in 1918, but most of the square was built in the 1950s. Many buildings surrounding the central square have since been renovated and its northern parts were largely restored in the 2000s. 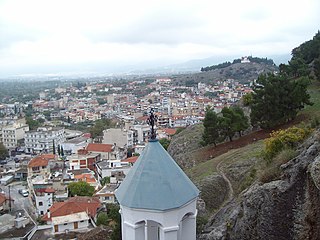 Sidirokastro is a town and a former municipality in the Serres regional unit, Greece. Since the 2011 local government reform it is part of the municipality Sintiki, of which it is the seat and a municipal unit. It is built near the fertile valley of the river Strymonas, on the bank of the Krousovitis River. Sidirokastro is situated on the European route E79 and the main road from northern Greece (Thessaloniki) to Bulgaria. It has a number of tourist sights, such as the medieval stone castle, Byzantine ruins, and natural spas. 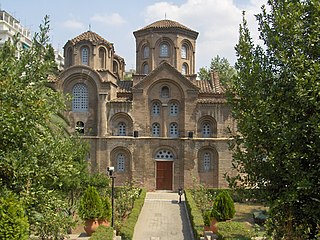 The Church of Panagia Chalkeon is an 11th-century Byzantine church in the northern Greek city of Thessaloniki. 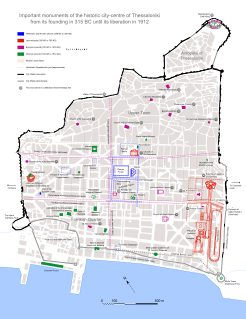 The history of the city of Thessaloniki is a long one, dating back to the ancient Greeks (Macedonians). Today with the opening of borders in Southeastern Europe it is currently experiencing a strong revival, serving as the prime port for the northern Greek regions of Macedonia and Thrace, as well as for the whole of Southeastern Europe. 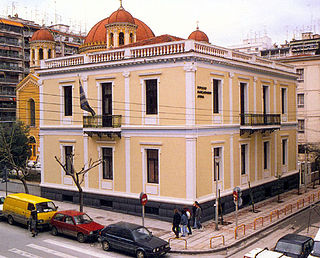 The Museum for the Macedonian Struggle is located in the centre of the city Thessaloniki in Central Macedonia, Greece. It occupies a neo-classical building designed by the renowned architect Ernst Ziller and built in 1893. In its six ground-floor rooms the museum graphically illustrates the modern and contemporary history of Greek Macedonia. It presents the social, economic, political and military developments that shaped the presence of Hellenism in the region. This approach enables the visitor to form a global picture, not only of the revolutionary movements in the area, but also of the rapidly changing society of the southern Balkans and its agonizing struggles to balance between tradition and

Macedonians, also known as Greek Macedonians or Macedonian Greeks, are a regional and historical population group of ethnic Greeks, inhabiting or originating from the Greek region of Macedonia, in Northern Greece. Today, most Macedonians live in or around the regional capital city of Thessaloniki and other cities and towns in Macedonia (Greece), while many have spread across Greece and in the diaspora. 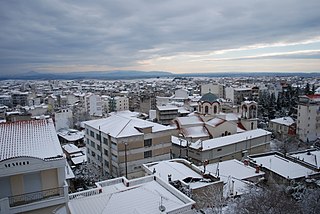 Eleftherias Square is a central square in downtown Thessaloniki, Greece. It takes its name from the Young Turk Revolution, which began in the square in 1908. The square is currently a car park, but a public competition was launched by the Municipality of Thessaloniki in 2013 to select a design for its redevelopment into a park. Construction will start in 2018 at a cost of €5.1 million.