Tsing Chau Tsai Peninsula (Chinese :青洲仔半島; Jyutping :ceng1 zau1 zai2 bun3 dou2) is the peninsula located at the northeast of Lantau Island, New Territories, Hong Kong, including Yam O, To Kau Wan, Tai Tsing Chau, Tsing Chau Tsai and Penny's Bay. It administratively belongs to Tsuen Wan District, while the remaining areas of Lantau Island belong to Islands District. [1] It is an exclave and it is only connected by Kap Shui Mun Bridge with other part of Tsuen Wan District, like Ma Wan.

A few areas in there have been developed. Sunny Bay station is constructed at the reclaimed land of Yam O to act as an interchange between Tung Chung line and Disneyland Resort line of MTR. Hong Kong Disneyland Resort is built at the reclaimed land of Penny's Bay, formerly the shipyard area. According to the Northeast Lantau Outline Zoning Plan issued by the Hong Kong SAR Government, Container Terminal 10 and 11 may be built in the south of the peninsula. [2]

Tsing Chau Tsai Peninsula is or was the location of several villages, including: 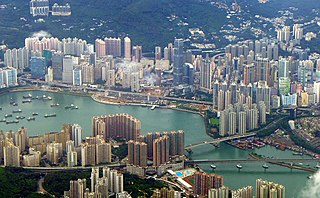 Yam O is a bay located on the northeast shore of Lantau Island, in the New Territories of Hong Kong. It is part of the Ma Wan constituency of the Tsuen Wan District Council. 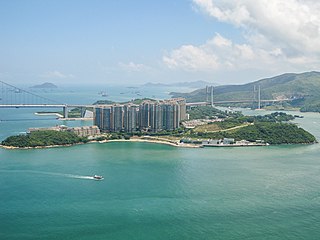 The kai-to, sometimes kaito or kaido is a type of small, motorised ferry that operates in Hong Kong. They are usually used to serve remote coastal settlements in the territory's outlying islands.

A Site of Special Scientific Interest or SSSI is a special area to protect wildlife, habitats and geographic features based on scientific interest in Hong Kong. Scientific interests are special features relating to animal life, plant life, geology and/or geography. After being identified by the Agriculture, Fisheries and Conservation Department, these areas are documented by the Planning Department and added to maps. From 1975 to 2005, 67 locations were designated SSSIs throughout Hong Kong.

The Outlying Islands refers to all the islands that make up the territory of Hong Kong, with the exception of Hong Kong Island. There are 263 islands over 500 m2 in Hong Kong, the vast majority of which are located within the New Territories and significant numbers of them are located in Islands District in the south and southwest, Sai Kung District in the southeast, and Tai Po District and North District in the northeast. The term outlying is not strictly defined and in some cases islands very close to Hong Kong Island and mainland China are not included.

Luk Keng Village or Luk Keng Tsuen is a village located on the Yam O peninsula on Lantau Island in the New Territories of Hong Kong, which links to Cheung Sok, a nearby uninhabited island, via a sandbank. From the Luk Keng Pier there a kai-to transportation service to Tsing Lung Tau in Tsuen Wan. Although nearby areas including Sunny Bay station have been developed, Luk Keng Village is still preserved as an undeveloped rural heritage area.