Tsiolkovsky (Russian : Циолко́вский) may refer to:

Konstantin Eduardovich Tsiolkovsky was a Russian and Soviet rocket scientist and pioneer of the astronautic theory. Along with the French Robert Esnault-Pelterie, the German-Romanian Hermann Oberth and the American Robert H. Goddard, he is considered to be one of the founding fathers of modern rocketry and astronautics. His works later inspired leading Soviet rocket engineers such as Sergei Korolev and Valentin Glushko and contributed to the success of the Soviet space program.

Tsiolkovsky is a closed town in Amur Oblast, Russia, located on the Bolshaya Pyora River, 110 kilometers (68 mi) from the border with China and 180 kilometers (110 mi) north of Blagoveshchensk, the administrative center of the oblast. Population: 5,892 (2010 Census); 5,050 (2002 Census). The town serves the nearby spaceport, Vostochny Cosmodrome.

The Konstantin E. Tsiolkovsky State Museum of the History of Cosmonautics is the first museum in the world dedicated to the history of space exploration. It was opened on 3 October 1967 in Kaluga, and is named after Konstantin Tsiolkovsky, a school master and rocket science pioneer who lived most of his life in this city. The driving force behind the creation of the museum was Sergei Korolyov, chief designer of RKK Energiya. The building was designed by Boris Barkhin, Evgeny Kireev, Nataliya Orlova, Valentin Strogy and Kirill Fomin, and the cornerstone was laid by Yuri Gagarin on 13 June 1961. The museum has over 100,000 visitors per year and has 127 employees, of whom 43 are curators.

Vostok may refer to:

Georg Arthur Constantin Friedrich Zander, was a Baltic German pioneer of rocketry and spaceflight in the Russian Empire and the Soviet Union. He designed the first liquid-fueled rocket to be launched in the Soviet Union, GIRD-X, and made many important theoretical contributions to the road to space.

The Soviet space program comprised several of the rocket and space exploration programs conducted by the Soviet Union (USSR) from the 1930s until its collapse in 1991. Over its sixty-year history, this primarily classified military program was responsible for a number of pioneering accomplishments in space flight, including the first intercontinental ballistic missile (R-7), first satellite, first animal in Earth orbit, first human in space and Earth orbit, first woman in space and Earth orbit, first spacewalk, first Moon impact, first image of the far side of the Moon and unmanned lunar soft landing, first space rover, first sample of lunar soil automatically extracted and brought to Earth, and first space station. Further notable records included the first interplanetary probes: Venera 1 and Mars 1 to fly by Venus and Mars, respectively, Venera 3 and Mars 2 to impact the respective planet surface, and Venera 7 and Mars 3 to make soft landings on these planets.

Valentin Petrovich Glushko, was a Soviet engineer, and designer of rocket engines during the Soviet/American Space Race.

Tsiolkovskiy is a large lunar impact crater that is located on the far side of the Moon. Named for Russian scientist Konstantin Tsiolkovsky, it lies in the southern hemisphere, to the west of the large crater Gagarin, and northwest of Milne. Just to the south is Waterman, with Neujmin to the south-southwest. The crater protrudes into the neighbouring Fermi, an older crater of comparable size that does not have a lava-flooded floor.

Fermi is a large lunar impact crater of the category named a walled plain. It was named after Italian-American physicist and Nobel laureate Enrico Fermi. It lies on the far side of the Moon and can not be viewed from the Earth. Thus this feature must be viewed from an orbiting spacecraft.

Bondarenko is a lunar impact crater on the far side of the Moon. It is located to the northeast of the large, dark-floored crater Tsiolkovskiy, and south of the crater Chauvenet. This is a worn crater formation with an irregular floor, similar to other craters in the area, which are covered by ejecta from Tsiolkovskiy.

The Proton was a model of Soviet Earth observation satellites. The maximum mass was about 17 tonnes. Four Proton satellites were launched between 1965 and 1968. The satellite was developed by NPO Mashinostroyeniya. The aim of the project was to study high and ultra-high energy particles. 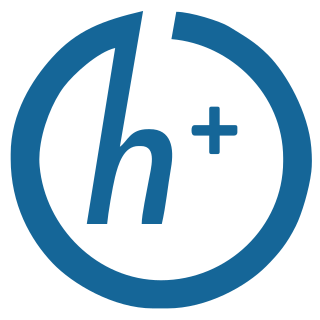 Russian cosmism is a philosophical and cultural movement that emerged in Russia in the turn of the 19th and 20th centuries.

Fesenkov is a lunar impact crater on the far side of the Moon. It is located to the east-southeast of the prominent crater Tsiolkovskiy, and less than a crater diameter to the north of Stark.

Patsaev is a lunar impact crater that lies on the far side of the Moon, to the northeast of the prominent crater Tsiolkovskiy. To the northwest is the smaller crater Lander.

Korolyov, also transliterated as Korolev or Korolov, or its feminine variant Korolyova (Королёва), is a common Russian surname, and the name of multiple places in Russia. It is derived from the word "король", korol) meaning "king". Korolyov may refer to: 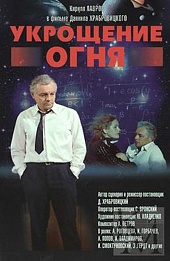 Taming of the fire is a 1972 film, directed by Daniil Khrabrovitsky and starring Kirill Lavrov.

1590 Tsiolkovskaja, provisional designation 1933 NA, is a stony Flora asteroid from the inner regions of the asteroid belt, approximately 11 kilometers in diameter. It was discovered on 1 July 1933, by Soviet–Russian astronomer Grigory Neujmin at Simeiz Observatory, on the Crimean peninsula. It was named for rocket scientist Konstantin Tsiolkovsky.

Take-Off is a 1979 Soviet biopic about the Russian rocket scientist Konstantin Tsiolkovsky, directed by Savva Kulish and based on a screenplay by Oleg Osetinsky. 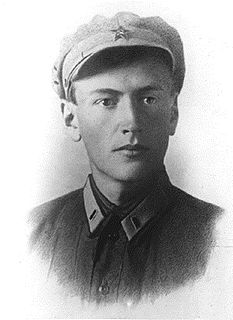 Mikhail Klavdievich Tikhonravov was a Soviet aerospace engineer and scientist who was a pioneer of spacecraft design and rocketry.

Tsiolkovskiy Island is an ice-covered island in the Fimbul Ice Shelf, Queen Maud Land. The summit of the island rises about 200 m above the general level of the ice shelf. Kroshka Island lies close southwest and is similar but smaller. First mapped by the Soviet Antarctic Expedition in 1961 and named for Konstantin Eduardovich Tsiolkovsky (1857–1935), Russian scientist and inventor.