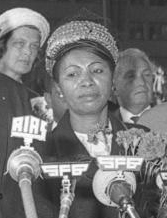 Justine Tsiranana was a Malagasy public figure who served as the first First Lady of Madagascar from 1960 to 1972. She was the wife of the country's founding president, Philibert Tsiranana.

Philibert Tsiranana was a Malagasy politician and leader, who served as the first President of Madagascar from 1959 to 1972. 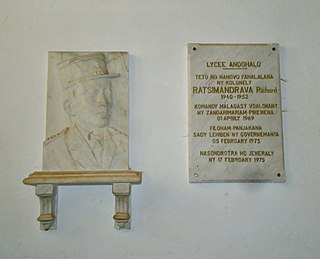 Colonel Richard Ratsimandrava was President of Madagascar for six days in February 1975. His assassination in 1975 led to a civil war.

The flag of Madagascar was adopted on 14 October 1958, two years before the independence of that nation, as Madagascar prepared for a referendum on its status in the French Community.

Ry Tanindrazanay malala ô! is the national anthem of Madagascar. The lyrics were written by Pasteur Rahajason and the music by Norbert Raharisoa. It is similar to a march and was strongly influenced by European music and the French colonial education system It is often played by Malagasy musicians on the accordion. The anthem was officially adopted on April 27, 1959 by the parliament of Madagascar prior to the official granting of independence on 26 June 1960. Philibert Tsiranana was Prime Minister of Madagascar during the creation of the anthem and Michel Debré was the French Prime Minister during this time. The main focus of the anthem is love of the land, as well as thankfulness to God and an appeal to unity and loyalty under the nation.

Gabriel Ramanantsoa was the President and Prime Minister of Madagascar from 1972 to 1975.

The Malagasy Republic was a state situated in Southeast Africa. It was established in 1958 as an autonomous republic within the newly created French Community and existed until the proclamation of the Democratic Republic of Madagascar in 1975.

Monja Jaona (1910-1994) was a Malagasy politician and early nationalist who significantly drove political events on the island during his lifetime. He was a member of Jiny, a militant nationalist group formed in southern Madagascar in the 1940s that sided with MDRM during the ultimately unsuccessful Malagasy Uprising of 1947 against French rule. The colonial government imprisoned him from 1946 to 1950 for his affiliation with Jiny. He formed the Madagascar for the Malagasy (MONIMA) party in 1958 and successfully campaigned for the seat of mayor in Toliara, a position he held from 1959 to 1961. He came to view president Philibert Tsiranana and his Social Democratic Party (PSD) supporters as unduly favorable to continued French interests on the island after independence in 1960. Jaona instigated the 1971-72 rotaka farmer and student protests that successfully forced Tsiranana's resignation.

Social Democratic Party of Madagascar is a political party in Madagascar.

ZWAM was a youth movement which emerged in Antananarivo, Madagascar in 1972 to support the student protests against the rule of President Philibert Tsiranana. The name has various interpretations, including "Malagasy Western Slave Youth" and "Zatovo Warriors' Association of Malagasy". The term "Western" in the title comes from the fact that members of the group were fans of Spaghetti Westerns and dressed in cowboy hats. According to Lesley Sharp the "cowboys" of ZWAM "assumed a style of dress reminiscent of Clint Eastwood, a loner recognized as the 'champion of real justice' over 'the venal guardians of formal law'". The group later changed its name to ZOAM, an acronym for Zatovo Orin'Asa Malagasy.

Albert Sylla was a Malagasy doctor and politician.

Presidential elections were held for the first time in Madagascar on 30 March 1965. Incumbent President Philibert Tsiranana of the Social Democratic Party dominated the campaign and was elected with 97.2% of the voter.

Presidential elections were held in Madagascar on 30 January 1972. Incumbent President Philibert Tsiranana of the Social Democratic Party was the only candidate, and won the approval of 99.7% of voters. However, public unrest led to him handing over power to General Gabriel Ramanantsoa. Ramanantsoa put forward proposals for a five-year transition period during which the National Assembly would be suspended. The plans were approved in a referendum later in the year.

A referendum on military rule was held in Madagascar on 8 October 1972. It followed General Gabriel Ramanantsoa taking power from elected President Philibert Tsiranana in May, and Ramanantsoa's proposals for a five-year transition period during which the National Assembly would be suspended. The plans were approved by 94.43% of voters, with an 84% voter turnout. 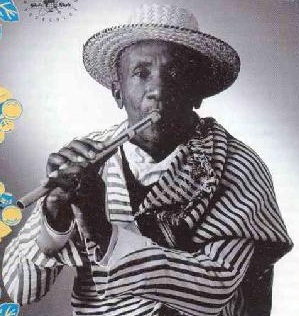 Philibert Rabezoza, better known by the name Rakoto Frah, was a flautist and composer of traditional music of the central highlands of Madagascar. Born in 1923 near the capital city of Antananarivo to a poor rural family, Rakoto Frah surmounted the challenges posed by his underprivileged origins to become the most acclaimed 20th century performer of the sodina flute, one of the oldest traditional instruments on the island. Through frequent international concerts and music festival performances, he promoted the music of the highlands of Madagascar and became one of the most famous Malagasy artists, both within Madagascar and on the world music scene.

The Colony of Madagascar and Dependencies was a French colony off the coast of Southeast Africa between 1897 and 1958.

The rotaka was a series of farmer and student protests in Madagascar between April 1971 and May 1972 that led to the collapse of the First Republic of Madagascar under President Philibert Tsiranana.

The Parti des déshérités de Madagascar was a political party active in Madagascar from June 1946 into the First Republic (1960–1972). It was formed in reaction to the establishment and rapid political success of the Mouvement démocratique de la rénovation malgache (MDRM) political party, formed by Merina elites on a platform of independence from France. While nationalism - and therefore the MDRM - had widespread support from all ethnic communities, PADESM championed the empowerment and equitable government of coastal peoples, who had historically been subjugated by the Merina and feared the MDRM could ensure their return to political dominance upon independence. They actively recruited and campaigned along ethnic lines, initially including coastal peoples and the descendents of Merina slaves, but eventually excluding the latter entirely. The formation and political success of PADESM was actively fostered by the French colonial administration, which manipulated election results in favor of the coastal party.