It was introduced by B. S. Tsirelson in 1974. The same year, Figiel and Johnson published a related article (Figiel & Johnson (1974)) where they used the notation T for the dual of Tsirelson's example. Today, the letter T is the standard notation [1] for the dual of the original example, while the original Tsirelson example is denoted by T*. In T* or in T, no subspace is isomorphic, as Banach space, to an ℓ p space, 1 ≤ p < ∞, or to c0.

The radically new Tsirelson construction is at the root of several further developments in Banach space theory: the arbitrarily distortable space of Schlumprecht (Schlumprecht (1991)), on which depend Gowers' solution to Banach's hyperplane problem [4] and the Odell–Schlumprecht solution to the distortion problem. Also, several results of Argyros et al. [5] are based on ordinal refinements of the Tsirelson construction, culminating with the solution by Argyros–Haydon of the scalar plus compact problem. [6]

On the vector space ℓ∞ of bounded scalar sequences  x ={xj } j∈N, let Pn denote the linear operator which sets to zero all coordinates xj of x for which j ≤ n.

The unit ball  B∞  of ℓ∞ is compact and metrizable for the topology of pointwise convergence (the product topology). The crucial step in the Tsirelson construction is to let K be the smallest pointwise closed subset of  B∞  satisfying the following two properties: [7]

a. For every integer  j  in N, the unit vector ej and all multiples

is a block-disjoint sequence in K, then

c. Together with every element x of K, the set K contains all vectors y in ℓ∞ such that |y| ≤ |x| (for the pointwise comparison).

It is then shown that K is actually a subset of c0, the Banach subspace of ℓ∞ consisting of scalar sequences tending to zero at infinity. This is done by proving that

d: for every element x in K, there exists an integer n such that 2 Pn(x) belongs to K,

The Tsirelson space T* is the Banach space whose unit ball is V. The unit vector basis is an unconditional basis for T* and T* is reflexive. Therefore, T* does not contain an isomorphic copy of c0. The other ℓ p spaces, 1 ≤ p < ∞, are ruled out by condition b.

, the n-dimensional ℓ1-space, for all n.

The Tsirelson space T is distortable, but it is not known whether it is arbitrarily distortable.

The space T* is a minimal Banach space. [9] This means that every infinite-dimensional Banach subspace of T* contains a further subspace isomorphic to T*. Prior to the construction of T*, the only known examples of minimal spaces were ℓ p and c0. The dual space T is not minimal. [10]

The space T* is polynomially reflexive.

The symmetric Tsirelson spaceS(T) is polynomially reflexive and it has the approximation property. As with T, it is reflexive and no ℓ p space can be embedded into it.

Since it is symmetric, it can be defined even on an uncountable supporting set, giving an example of non-separable polynomially reflexive Banach space.

In mathematics, specifically in functional analysis, a C∗-algebra is a Banach algebra together with an involution satisfying the properties of the adjoint. A particular case is that of a complex algebra A of continuous linear operators on a complex Hilbert space with two additional properties: 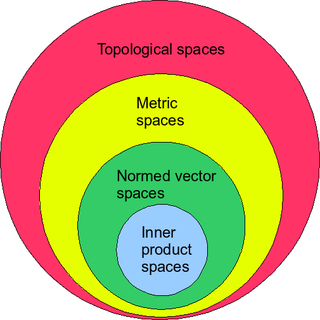 In abstract algebra, the direct sum is a construction which combines several modules into a new, larger module. The direct sum of modules is the smallest module which contains the given modules as submodules with no "unnecessary" constraints, making it an example of a coproduct. Contrast with the direct product, which is the dual notion.

In mathematics, specifically functional analysis, a Banach space is said to have the approximation property (AP), if every compact operator is a limit of finite-rank operators. The converse is always true.

In the field of mathematics known as functional analysis, the invariant subspace problem is a partially unresolved problem asking whether every bounded operator on a complex Banach space sends some non-trivial closed subspace to itself. Many variants of the problem have been solved, by restricting the class of bounded operators considered or by specifying a particular class of Banach spaces. The problem is still open for separable Hilbert spaces.

In mathematics, a Schauder basis or countable basis is similar to the usual (Hamel) basis of a vector space; the difference is that Hamel bases use linear combinations that are finite sums, while for Schauder bases they may be infinite sums. This makes Schauder bases more suitable for the analysis of infinite-dimensional topological vector spaces including Banach spaces.

Riesz's lemma is a lemma in functional analysis. It specifies conditions that guarantee that a subspace in a normed vector space is dense. The lemma may also be called the Riesz lemma or Riesz inequality. It can be seen as a substitute for orthogonality when one is not in an inner product space.

In the area of mathematics known as functional analysis, James' space is an important example in the theory of Banach spaces and commonly serves as useful counterexample to general statements concerning the structure of general Banach spaces. The space was first introduced in 1950 in a short paper by Robert C. James.

In mathematics, an Orlicz sequence space is any of certain class of linear spaces of scalar-valued sequences, endowed with a special norm, specified below, under which it forms a Banach space. Orlicz sequence spaces generalize the spaces, and as such play an important role in functional analysis.