Tsirgu is a settlement in Setomaa Parish, Võru County in southeastern Estonia. [1]

The Tsirgu pine (Estonian : Kalmõpettäi) is a protected pine in Tsirgu village. It is about 12 metres (39 ft) tall and under protection as an archaeological monument.

Middle Island is a hamlet and census-designated place (CDP) in Suffolk County, New York, United States. The population was 10,483 at the 2010 census. It is situated between the hamlets of Coram and Ridge, to the west and east, respectively, and Rocky Point and Yaphank to the north and south. The name derives from the fact that it lies approximately halfway between the eastern and western ends of Long Island as well as halfway between the northern and southern boundaries.

Pinus sylvestris, Scots pine (UK), Scotch pine (US), European red pine, or Baltic pine is a species of tree in the pine family Pinaceae that is native to Eurasia, ranging from Western Europe to Eastern Siberia, south to the Caucasus Mountains and Anatolia, and north to well inside the Arctic Circle in Fennoscandia. In the north of its range, it occurs from sea level to 1,000 m (3,300 ft), while in the south of its range it is a mountain tree, growing at 1,200–2,600 m (3,900–8,500 ft) altitude. It is readily identified by its combination of fairly short, blue-green leaves and orange-red bark.

Hiiumaa is one of 15 counties of Estonia, being the smallest county both in terms of area and population. It consists of Hiiumaa, the second largest island of Estonia, and several smaller islands near it. The county borders Lääne County to the east and Saare County to the south.

Aa is a village in northern Estonia, on the southern coast of the Gulf of Finland in the eastern part of the Lüganuse Parish of Ida-Viru County, 10 km (6.2 mi) from Lüganuse. Part of the village, including the Aa manor house, is situated on the North Estonian limestone bank.

Vahase is a 65.52 ha Estonian islet in the Gulf of Riga. It's located about 200 m (660 ft) west of the island of Abruka. Administratively Vahase belongs to the Abruka village in Lääne-Saare Parish, Saare County. 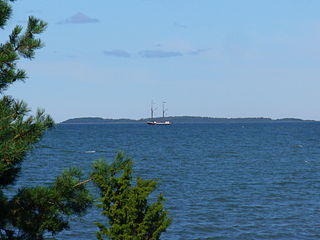 Kõverlaid is a small, moraine-based Baltic Sea island belonging to the country of Estonia. Its coordinates are 58°49′01″N23°04′46″E.

Prangli is an Estonian island in the Gulf of Finland.

Estonia, officially the Republic of Estonia, is a country in Northern Europe. It is bordered to the north by the Gulf of Finland across from Finland, to the west by the Baltic Sea across from Sweden, to the south by Latvia, and to the east by Lake Peipus and Russia. The territory of Estonia consists of the mainland and of 2,222 islands on the eastern coast of the Baltic Sea, covering a total area of 45,227 km2 (17,462 sq mi), and is influenced by a humid continental climate. Tallinn, the capital of Estonia, and Tartu are the largest cities and urban areas in the country. Other notable cities include Narva, Pärnu, Kohtla-Järve and Viljandi. The official language of the country, Estonian, is the second-most-spoken Finnic language.

Laekvere is a small borough in Vinni Parish, Lääne-Viru County, Estonia. Between 1991–2017 Laekvere was the administrative centre of Laekvere Parish. Laekvere has a population of 476.

Tõlli is a village in Tõstamaa Parish, Pärnu County, in southwestern Estonia. It is located just southeast of Tõstamaa, the administrative centre of the municipality, on the coast of the Gulf of Riga. Tõlli has a population of 44. 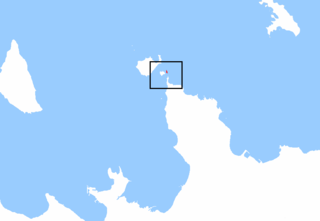 Kumbli is a 0.023 ha uninhabited islet in the Gulf of Finland, near Tallinn, Estonia. It is located 270 m (890 ft) north of the Viimsi Peninsula and 150 m (490 ft) east of the Kräsuli islet. Administratively Kumbli belongs to the Rohuneeme village in Viimsi Parish, Harju County. 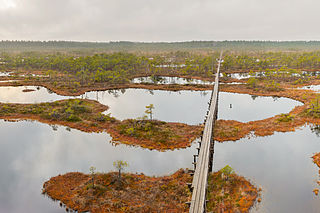 Viidumäe Nature Reserve is a nature reserve situated on Saaremaa in western Estonia, in Saare County.

Vardi Nature Reserve is a nature reserve in Rapla County in central Estonia.

Forests cover about 50% of the territory of Estonia, or around 2 million hectares, and so make out an important and dominating landscape type in the country. National law and policies recognize that forests are a natural and ecological resource, and the importance of forests is to be considered from an economic, social, ecological and cultural aspect.

Järveküla Nature Reserve is a nature reserve founded in 1990, situated by Lake Vörtsjärv in southern Estonia near the village of Järveküla. The nature reserve has been established to protect the population of white-tailed eagles present in the area, and includes pine forest and patches of bog. 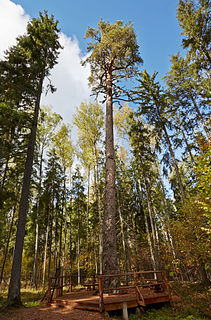