Last updated April 25, 2020
Memorial complex dedicated to the victims of the Armenian Genocide

The Armenian Genocide memorial complex (Armenian : Հայոց ցեղասպանության զոհերի հուշահամալիր, Hayots tseghaspanutyan zoheri hushahamalir, or Ծիծեռնակաբերդ, Tsitsernakaberd) is Armenia's official memorial dedicated to the victims of the Armenian Genocide, built in 1967 on the hill of Tsitsernakaberd (Armenian : Ծիծեռնակաբերդ) in Yerevan. Every year on 24 April, the Armenian Genocide Remembrance Day, thousands of Armenians gather at the memorial to commemorate the victims of the genocide. The people who gather in Tsiternakaberd lay fresh flowers out of respect for all the people who died in the Armenian genocide. Over the years, from around the world, a wide range of politicians, artists, musician, athletes, and religious figures have visited the memorial.

The memorial sits on one of three hills along the Hrazdan River that carry the name Tsitsernakaberd (literally "swallow's fortress"), and was the site of what was once an Iron Age fortress. Most of the above ground traces at this peak have since disappeared, but upon the smaller hill are still traces of a castle. Archaeological surveys took place in 2007, and excavations uncovered a wall that is hundreds of meters long and may still be seen in many places above ground. An altar cut from stone sits in the middle of a square at the edge of one of the hills, and large stones that weigh approximately two tons are still visible that cover graves from the second millennium BC. Apartments were later built along the hills during Roman times, and were built over with other structures during medieval years. Nearby are also the remains of a very large building with a cave.[ citation needed ]

The idea of a genocide monument has its origin in the early 1960s when Hakob Zarobian was designated first secretary of the Communist Party of Armenia in 1962. On 16 July 1964, historians Tsatur Aghayan (the director of the Armenian branch of the Institute of Marxism–Leninism), Hovhannes Injikian (head of the section of Oriental Studies of the Academy of Sciences), and John Kirakosyan (deputy head of the section of ideology of the Central Committee of the party) sent a highly confidential letter to the Presidium of the Communist Party of Armenia, where they made a series of proposal to commemorate the 50th anniversary of the genocide. Point 8 said: "To build the memorial of the victims of the Armenian people in World War I on account of the income of the population. The memorial must symbolize the rebirth of the Armenian people." On 13 December 1964, Zarobian sent a report-letter to the Central Committee of the Communist Party of the Soviet Union, where the grounds and the meaning of the anniversary and the construction of the "monument dedicated to the Armenian martyrs sacrificed in World War I" were noted. The Council of Ministers of Soviet Armenia on March 16, 1965 adopted a resolution about "Building a Monument to Perpetuate the Memory of the Victims of the Yeghern of 1915." [3]

The construction of the monument began in 1966, during Soviet times, in response to the 1965 Yerevan demonstrations during which one hundred thousand people demonstrated in Yerevan for 24 hours to commemorate the 50th anniversary of the Genocide. [4] They demanded the Soviet authorities officially recognise it as a genocide. The memorial is designed by architects Arthur Tarkhanyan, Sashur Kalashyan and artist Hovhannes Khachatryan and was completed in November 1967. [5] [6]

The 44-meter stele symbolizes the national rebirth of Armenians. Twelve slabs are positioned in a circle, representing the twelve lost provinces in present-day Turkey. In the center of the circle, at a depth of 1.5 meters, there is an eternal flame dedicated to the 1.5 million people killed during the Armenian Genocide. [7]

Along the park at the memorial there is a 100-meter wall with the names of towns and villages where massacres and deportations are known to have taken place. On the rear side of the commemoration wall, plates have been attached to honor the people who committed themselves to relieving the distress of the survivors during and after the genocide (among others: Johannes Lepsius, Franz Werfel, Armin T. Wegner, Henry Morgenthau Sr., Fridtjof Nansen, Pope Benedict XV, Jakob Künzler, Bodil Biørn).

An alley of trees has been planted to commemorate the genocide victims.

The Armenian Genocide Museum-Institute opened in 1995 on the occasion of the 80th anniversary of the genocide. The structure of the museum, planned by architects Sashur Kalashian, Lyudmila Mkrtchyan and sculptor F. Araqelyan, has followed a unique design. Since opening, the museum has received tens of thousands of visitors including schoolchildren, college students and huge numbers of tourists from outside Armenia. The Republic of Armenia has turned visiting the museum into part of state protocol and many official foreign delegations have already visited the museum. These delegations have included Pope John Paul II, Pope Francis, President of the Russian Federation Vladimir Putin, Presidents of France Jacques Chirac and Francois Hollande, and other well-known public and political figures. The museum contains historical documents and is open to the public for guided tours in Armenian, Russian, English, French, and German. [8]

The two-story building is built directly into the side of a hill so as not to detract from the presence of the Genocide Monument nearby. The roof of the museum is flat and covered with concrete tiles. It overlooks the scenic Ararat Valley and majestic Mount Ararat. The first floor of the museum is subterranean and houses the administrative, engineering and technical maintenance offices as well as Komitas Hall, which seats 170 people. Here also are situated the storage rooms for museum artifacts and scientific objects, as well as a library and a reading hall. The museum exhibit is located on the second floor in a space just over 1,000 square meters in size. There are three main indoor exhibit halls and an outer gallery with its own hall. The Genocide Monument is designed to memorialize the victims. The Genocide Museum’s mission is rooted in the understanding that the Armenian Genocide is important in preventing similar future tragedies, and in keeping with the notion that those who forget the past are condemned to repeat it. [9] 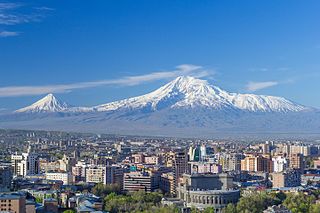 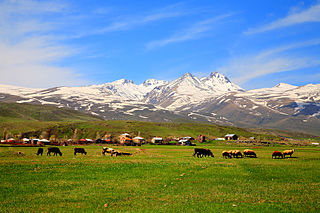 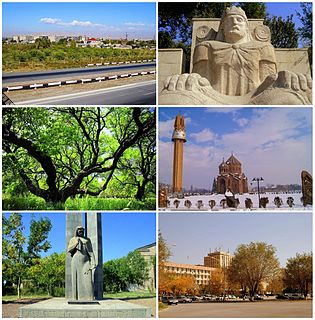 Artashat, is a town and urban municipal community in Armenia serving as the administrative centre of Ararat Province. It is located on the Araks River in the Ararat plain, 30 km southeast of Yerevan. Artashat was founded in 1945 by the Soviet government of Armenia and named after the nearby ancient city of Artashat.

Silva Kaputikyan ; 20 January 1919 – 25 August 2006) was an Armenian poet and political activist. One of the best-known Armenian writers of the twentieth century, she is recognized as "the leading poetess of Armenia" and "the grand lady of twentieth century Armenian poetry". Although a member of the Communist Party, she was a noted advocate of Armenian national causes. 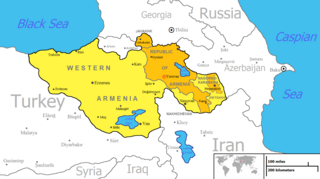 United Armenia, also known as Greater Armenia or Great Armenia, is an Armenian ethno-nationalist irredentist concept referring to areas within the traditional Armenian homeland—the Armenian Highland—which are currently or have historically been mostly populated by Armenians. The idea of what Armenians see as unification of their historical lands was prevalent throughout the 20th century and has been advocated by individuals, various organizations and institutions, including the nationalist parties Armenian Revolutionary Federation and Heritage, the ASALA and others.

Republic Square is the central town square in Yerevan, the capital of Armenia. It consists of two sections: an oval roundabout and a trapezoid-shaped section which contains a pool with musical fountains. The square is surrounded by five major buildings built in pink and yellow tufa in the neoclassical style with extensive use of Armenian motifs. This architectural ensemble includes the Government House, the History Museum and the National Gallery, Armenia Marriott Hotel and two buildings that formerly housed the ministries of Foreign Affairs and Transport and Communications. The square was originally designed by Alexander Tamanian in 1924. The construction of most of the buildings was completed by the 1950s; the last building—the National Gallery—was completed in 1977.

Yerevan is made up of a multitude of parks, gardens, statues, buildings and other monuments. This article presents some of the principal monuments of Yerevan. 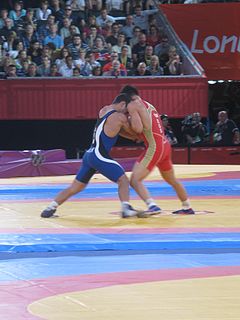 Arsen Julfalakyan is an Armenian Greco-Roman wrestler. He is an Olympic silver medalist, World and European Champion, and three-time Olympian.

Mother See of Holy Etchmiadzin, is the governing body of the Armenian Apostolic Church. It is headquartered around Etchmiadzin Cathedral in Vagharshapat (Etchmiadzin), Armenia and is the seat of the Catholicos of All Armenians, the head of the church.

Despite its small size, the Armenian-Cypriot community has plenty of monuments to show:

Saint Mesrop Mashtots Church is an Armenian Apostolic church in Oshakan that contains the grave of Mesrop Mashtots, the inventor of the Armenian alphabet. It is one of Armenia's better known churches and a pilgrimage site. Pilgrims visit the church on the Feast of the Holy Translators in October.

The following lists events that happened during 2010 in Armenia.