On the river are the cities of Kotovsk, Tambov, Morshansk, Sasovo.

It begins in the Sampursky District under the name of Mokraya Vershina. [4]

The Tsna has the following tributaries, from mouth to source: [2]

The name of the river (as well as the Oka tributary of the same name) is usually derived from the Baltic * Tasna, comparing it with Prussian. Tusnan "quiet". [5] Less popular is the version of origin from the other. * Dysna "right", bringing together the name with the hydronyma of the Desna. [6]

A calm, flat river, heavily regulated by dams, navigable in places from Tambov itself. The list of inland waterways in Russia includes a section from the mouth to the village of Tenshupino with a length of 47 km (2002). The left bank is treeless, heavily populated, but the villages are mostly 1–3 km from the river. Along the right bank almost everywhere there is a forest belt, but it comes to the water only in certain places, as it was cut down during the Great Patriotic War.

On the bank of the Tsna River there is the Holy Spring, known in Tambov and the nearest regions, located in the village of Treguliai. In the summer, many people come there to drink from the spring or bathe.

The price below Tambov is a meandering calm river, 40–80 m wide, flowing along a wide valley with a lot of creeks, old men, a stream where you can go fishing. On the banks of the reeds, thickets of bush. Water is markedly polluted.

Below Perkino begins the Semikinskiy Canal, which significantly shortens the way for Tsna. In the floodplain of Tsna near Perkino, Semikino and below - the labyrinths of overgrown with old reeds.

The fourth dam is behind the village of Mamontovo, the fifth - in Morshansk.

Below Morshansk, Tsna becomes wider, the current is faster, beaches with small, sometimes silty, sand appear. The beaches are mainly meadow, only near Mutasievo on the right bank of the wedge is the forest to which the creek leads.

Before the village Serpovoe - the sixth dam. Ten kilometers from the dam after the mouth of the Serp tributary on the right high bank is a pine forest. At local residents this tract is called the Serpovsky Utesom.

Pine forest, reaching the river, there is also in front of the Rysly; Behind the village there is a floating bridge. The village of Chernitovo is a dam. Behind the dam on the banks again meadows. The river becomes wide (from 100 to 200 m).

Before the last dam (HPP), the river forms a reservoir with a length of about 6 km and a width of 0.5 km.

The dam is also in the area of the villages Aglomazovo and Tenshupino, where the river spills about 1 km. But after the reconstruction of the dam, the dam began to collapse year after year, and now the river has become much shallow.

Below the dam, the channel of the Tznu is narrowed to 40–50 m, the current accelerates, sandy rifts appear. The forest approaches the water in the form of separate islands. In Soviet times, the river was used for navigation, along the entire length of the shipping section from Tambov. For passenger navigation, air-cushion ships (SVPs) of the Zarnitsa type were used.

Widely used by tourists for rafting.

The Kansas River, also known as the Kaw, is a river in northeastern Kansas in the United States. It is the southwestern-most part of the Missouri River drainage, which is in turn the northwestern-most portion of the extensive Mississippi River drainage. Its two names both come from the Kanza (Kaw) people who once inhabited the area; Kansas was one of the anglicizations of the French transcription Cansez of the original kką:ze. The city of Kansas City, Missouri, was named for the river, as was later the state of Kansas.

The Altamaha River is a major river in the U.S. state of Georgia. It flows generally eastward for 137 miles (220 km) from its origin at the confluence of the Oconee River and Ocmulgee River towards the Atlantic Ocean, where it empties into the ocean near Brunswick, Georgia. No dams are directly on the Altamaha, though some are on the Oconee and the Ocmulgee. Including its tributaries, the Altamaha River's drainage basin is about 14,000 square miles (36,000 km2) in size, qualifying it among the larger river basins of the US Atlantic coast.

The Brigach is the shorter of two streams that jointly form the river Danube in Baden-Württemberg, Germany. The Brigach has its source at 925 m (3,035 ft) above sea level within St. Georgen in the Black Forest. The Brigach crosses the city Villingen-Schwenningen. 40.4 km (25.1 mi) from the source, the Brigach joins the Breg in Donaueschingen to form the Danube River.

The Seversky Donets, Siverskyi Donets, usually simply called the Donets, is a river on the south of the East European Plain. It originates in the Central Russian Upland, north of Belgorod, flows south-east through Ukraine and then again through Russia to join the Don River, about 100 km (62 mi) from the Sea of Azov. The Donets is the fourth longest river in Ukraine and the biggest in the Eastern Ukraine. It is an important source of fresh water in the east of the country. It gives its name to the Donets Basin, known commonly as the Donbass, an important coal mining region in Ukraine.

Moksha is a river in central Russia, a right tributary of the Oka River. It flows through Penza Oblast, Nizhny Novgorod Oblast, Ryazan Oblast and the Republic of Mordovia, and joins the Oka near Pyatnitsky Yar, below the city of Penza Oblast. 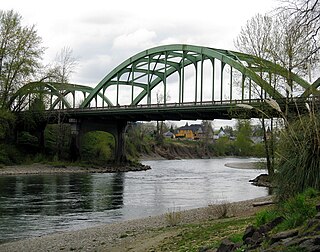 The Enz is a river flowing north from the Black Forest to the Neckar in Baden-Württemberg. It is 106 km long.

The Wainganga is a river in India originating in the Mahadeo Hills in Mundara near the village Gopalganj in Seoni, Madhya Pradesh. It is a key tributary of the Godavari. The river flows south in a winding course through the states of Madhya Pradesh and Maharashtra, roughly 579 km (360 mi). After joining the Wardha River, the united stream, which is known as the Pranahita River, empties into the Godavari River at Kaleshwaram, Telangana.

The Tsna is a river in Kuvshinovsky, Ostashkovsky, Firovsky, and Vyshnevolotsky Districts of Tver Oblast of Russia. It flows into Lake Mstino, which is drained by the Msta and belongs to the drainage basin of the Neva and the Baltic Sea. It is 160 kilometres (99 mi) long, and the area of its basin 4,140 square kilometres (1,600 sq mi). The principal tributary of the Tsna is the Belaya River (right). In 1719, the river was dammed some 10 km above its mouth, creating the Vyshny Volochyok Reservoir.

The Horyn or Haryn is a tributary of the Pripyat River, which flows through Ukraine and Belarus. The Horyn is 659 kilometres (409 mi) long, and has a drainage basin of 27,700 square kilometres (10,700 sq mi). It has a maximum width of 80 m, and a maximum depth of 16 m. An important tributary of the Horyn River is the Sluch River. 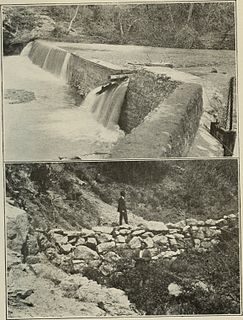 Santiago Creek is a major watercourse in Orange County in the U.S. state of California. About 34 miles (55 km) long, it drains most of the northern Santa Ana Mountains and is a tributary to the Santa Ana River. It is one of the longest watercourses entirely within the county. The creek shares its name with Santiago Peak, at 5,687 ft (1,733 m) the highest point in Orange County, on whose slopes its headwaters rise. 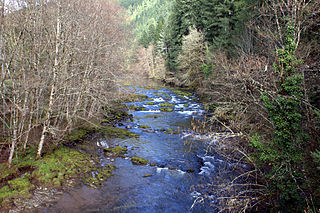 Blue River is a tributary of the McKenzie River in Linn and Lane counties in the U.S. state of Oregon. From its source at the confluence of Mann and Wolf creeks in the Cascade Range, it flows generally southwest to join the McKenzie near the community of Blue River. Saddle Dam and Blue River Dam block the river about 2 miles (3 km) from its mouth to form Blue River Reservoir, a multipurpose impoundment built in 1968 by the United States Army Corps of Engineers. 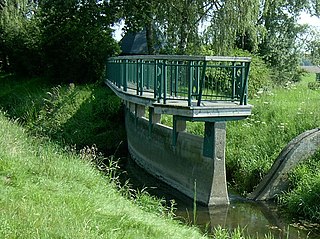 Mahoning Creek is a tributary of the Susquehanna River in Columbia County and Montour County, in Pennsylvania, in the United States. It is approximately 10.6 miles (17.1 km) long and flows through Madison Township in Columbia County and West Hemlock Township, Derry Township, Valley Township, Mahoning Township, and Danville in Montour County. The watershed of the creek has an area of 39.6 square miles (103 km2). Its tributaries include Kase Run, Mauses Creek, and Sechler Run. Mahoning Creek is designated as a Trout-Stocking Fishery and a Migratory Fishery for part of its length and as a Warmwater Fishery and a Migratory Fishery for the remainder.

Spring Brook is a tributary of the Lackawanna River in Lackawanna County and Luzerne County, in Pennsylvania, in the United States. It is approximately 17 miles (27 km) long and flows through Covington Township, Spring Brook Township, and Moosic in Lackawanna County and Pittston Township in Luzerne County. The watershed of the stream has an area of 57.2 square miles (148 km2). It is designated as a High-Quality Coldwater Fishery and a Migratory Fishery above Interstate 476 and as a Coldwater Fishery and a Migratory Fishery below it. A section is also designated as Class A Wild Trout Waters. The stream's tributaries include Panther Creek, Plank Bridge Creek, Rattlesnake Creek, Green Run, Monument Creek, and Covey Swamp Creek. It has a relatively high level of water quality and is very slightly acidic, with a pH of 6.4 to 6.9.

The Oka-Don Lowlands, is a flat plain in European Russia bounded on the north by the Oka River, on the south by the Don River, on the west by the Central Russian Upland, and on the east by the Volga Upland. The area is part of the larger East European Plain. The terrain is flat, with altitude averaging 160 meters above sea level, and the rivers meander on broad floodplains. Agricultural use of the plain is high, mostly for grain growing - wheat, barley and rye. The plain provides a flat route south-north route of transportation, situated between uplands. Until a line of forts was built across the territory by the Russian government in the 1640s, the plain was a route for Tatar invasion from the south.