The language is known as nyi tsó, while the people are known as Tsobo [tsó-bó]. The ethnic subgroups are, [2]

A subsection of the Gusobu may also live in Luzoo settlement.

Each ethnic subgroup speaks a different Tso dialect. The Swaabou and Gusobu reportedly have trouble understanding each other. Tso lexical diversity is partly due to the tradition of word tabooing. [2]

The Lahu people are an ethnic group of China and Mainland Southeast Asia.

Hiligaynon may refer to:

The Svans are an ethnic subgroup of the Georgians (Kartvelians) living mostly in Svaneti, a region in northwest Georgia. They speak the Svan language and are mostly bilingual also in Georgian. Both these languages belong to the Kartvelian language family. In the pre-1930 Soviet census, the Svans were afforded their own "ethnic group" (natsional'nost) category. The self-designation of the Svan is Mushüan, which is probably reflected in the ethnonym Misimian of the Classical authors.

The subgroups of the Han Chinese people, Chinese dialect groups or just dialect groups, are defined based on linguistic, cultural, ethnic, genetic and regional features. The terminology used in Mandarin to describe the groups is: "minxi", used in Mainland China or "zuqun", used in Taiwan. No Han subgroup is recognized as one of People's Republic of China's 56 official minority ethnic groups. Scholars like James W. Hayes have described the Han Chinese subgroups as "ethnic group" outright, at least in the context of Hong Kong society.

The Gurage languages, also known as Guragie, is a dialect-continuum language, which belong to the Semitic branch of the Afroasiatic language family. They are spoken by the Gurage people, who inhabit the Gurage Zone within the larger multi-ethnic Southern Nations, Nationalities, and Peoples' Region in central Ethiopia. 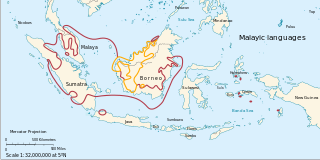 The Malayic languages are a branch of the Malayo-Polynesian subgroup of the Austronesian language family. The most prominent member is Standard Malay, which is the national language of Brunei, Singapore and Malaysia; it further serves as basis for Indonesian, the national language of Indonesia. The Malayic branch also includes the local languages spoken by ethnic Malays, further several languages spoken by various other ethnic groups of Sumatra and Borneo. The most probable candidate for the urheimat of the Malayic languages is western Borneo.

Yuanjiang Hani, Yi and Dai Autonomous County is a county of south-central Yunnan province, People's Republic of China. The county seat is the town of Lijiang (澧江镇), while the county itself is under the administration of Yuxi City. It derives its name from the Red River (Asia), which is known as the Yuan River (元江) in Yunnan, and is an important provincial crossroads for access to Southeast Asia. 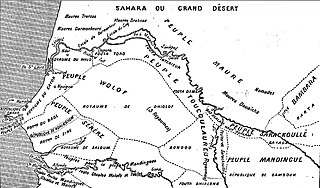 There are various ethnic groups in Senegal, The Wolof according to CIA statistics are the majority ethnic group in Senegal. Many subgroups of those can be further distinguished, based on religion, location and language. According to one 2005 estimate, there are at least twenty distinguishable groups of largely varying size.

The Land Dayak languages are a group of dozen or so languages spoken by the Bidayuh Land Dayaks of Borneo.

Bakumpai is an Austronesian language belonging to the West Barito languages. It is spoken by about 100,000 Bakumpai people living in the central Kalimantan, Indonesia. 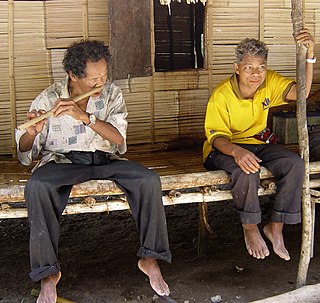 The Orang Asal are the indigenous people of Malaysia. The term is Malay for "Original People", used to refer to the aboriginals of Sabah, Sarawak, and Peninsular Malaysia. These groups are given the Bumiputera status in Malaysia.

Mantsi (autonym: ; also called Mondzi, Munji, Lolo, Flowery Lolo, or Red Lolo, is a Lolo-Burmese language. Speakers are located mostly in Funing County, Yunnan, China and Hà Giang Province, Vietnam. In China they are classified as a subgroup of the Yi people. In Vietnam they are called Lô Lô and is classified as one of the official 54 ethnic groups in the country.

Anu-Hkongso is a Sino-Tibetan language spoken between the Kaladan and Michaung rivers in Paletwa Township, Chin State, Burma. It is closely related to Mru, forming the Mruic language branch, whose position within Sino-Tibetan is unclear. It consists of two dialects, Anu (Añú) and Hkongso.