Tsopk Shahunyats was a region in the Sophene region of ancient Greater Armenia c. 400–800, in the Armenia Sophene or Sophanene. [1] [2]

Sophene was a province of the ancient kingdom of Armenia and of the Roman Empire, located in the south-west of the kingdom. The region lies in what is now southeastern Turkey. 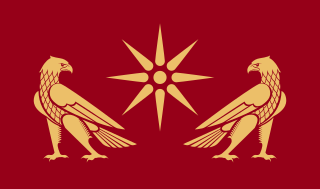 The Kingdom of Armenia, also the Kingdom of Greater Armenia, or simply Greater Armenia, sometimes referred to as the Armenian Empire, was a monarchy in the Ancient Near East which existed from 321 BC to 428 AD. Its history is divided into successive reigns by three royal dynasties: Orontid, Artaxiad and Arsacid (52–428). Armenia was bordered by Colchis and Iberia in the north, Caucasian Albania in the east and Iranian polities in the south.

Zariadres was a King of Sophene.

The Artaxiad dynasty or Ardaxiad dynasty ruled the Kingdom of Armenia from 189 BC until their overthrow by the Romans in AD 12. Their realm included Greater Armenia, Sophene and intermittently Lesser Armenia and parts of Mesopotamia. Their main enemies were the Romans, the Seleucids and the Parthians, against whom the Armenians had to conduct multiple wars.

Arsames I seems to have taken control of Commagene, Sophene and Armenia in the year 260 BC after the death of his grandfather Orontes III, king of Armenia, and his father Sames, king of Commagene.

Xerxes was satrap of the Seleucid territories of Sophene and Commagene from 228 BCE to 212 BCE, the year of his death.

Abdissares ruled the kingdom of Sophene after the assassination of his father, Xerxes in 212 BC. 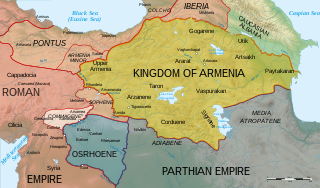 The Kingdom of Commagene was an ancient Armenian kingdom of the Hellenistic period, located in and around the ancient city of Samosata, which served as its capital. The Iron Age name of Samosata, Kummuh, probably gives its name to Commagene. Commagene has been characterized as a "buffer state" between Armenia, Parthia, Syria, and Rome; culturally, it seems to have been correspondingly mixed. The kings of the Kingdom of Commagene claimed descent from Orontes with Darius I of Persia as their ancestor, by his marriage to Rodogoune, daughter of Artaxerxes II who had a family descent from king Darius I. The territory of Commagene corresponds roughly to the modern Turkish provinces of Adıyaman and northern Antep.

The Kingdom of Sophene was an ancient Armenian kingdom. Founded around the 3rd century BC the kingdom maintained independence until around 90 BC when Tigranes the Great conquered the territories as part of his empire. An offshoot of this kingdom was the Kingdom of Commagene, formed when the Seleucids detached Commagene from Sophene.

"Pour toi Arménie" is a 1989 song written and composed by Charles Aznavour, and recorded by a group of French singers who were popular at the time. This charity single was intended to raise funds to help the Armenians who experienced the 1988 Spitak earthquake. It sold more than 1 million copies under the Trema-EMI label.

Hiraç Yagan, is an Armenian football midfielder, who plays for Stade Nyonnais of the Swiss Promotion League in Switzerland.

Orontes III was King of Armenia. In his reign he struggled for control of the Kingdom of Sophene with king Antiochus II Theos until being defeated in 272 BC and was forced to pay a large tribute which included 300 talents of silver and 1,000 horses and mules. Orontes III was subsequently murdered in 260 BC, whether at the instigation of King Antiochus II is not recorded. His son, Sames, continued to rule in Sophene. 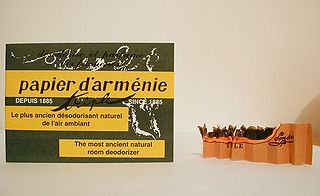 Carcathiocerta was a city in Armenian Sophene near the Tigris, identified with the modern town of Eğil. It was the first capital of Sophene until Arsames I founded the new capital Arshamshat around 230 BCE. The Seleucid king Antiochus IV Epiphanes renamed the city into Epiphania. Strabo in his Geography, calls it "The royal city of Sophene". 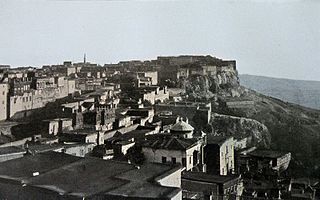 Harpoot also called Harput, Karpoot, Kharpert was a largely Armenian populated region in Western Armenia. Today it is mostly made up of the area of Elazığ. Kharput is often attributed to belonging to the old Armenian province of Sophene.

Claire Mouradian is a French historian of Armenian origin who specializes in the history and geopolitics of Caucasus and, more specifically, in the history of Armenia and Armenian diaspora. She explores in her works inter-ethnic relations in the Caucasus region, migration and the position of minorities.