Tsubaki Nekoi (猫井 椿, Nekoi Tsubaki, born January 21, 1969), formerly Mick Nekoi (猫井 みっく, Nekoi Mikku), is a member of the all-female manga-creating team Clamp. [1] She is the co-director and her duties in the team include applying screentones and correcting manga illustrations.[ citation needed ] She was also the lead artist (a role that normally falls to Mokona) on Legal Drug , The One I Love , Wish , Suki and xxxHolic . As the lead artist in xxxHolic , she is in charge of drawing the male characters while Mokona is responsible for the female characters.[ citation needed ]

For Clamp's 15th Anniversary in 2004, she and the other three members of Clamp changed their names because they reportedly wished to try new monikers. [2]

Clamp is an all-female Japanese manga artist group, consisting of leader and writer Nanase Ohkawa, and three artists whose roles shift for each series: Mokona, Tsubaki Nekoi, and Satsuki Igarashi.

Tsubasa: Reservoir Chronicle is a Japanese manga series written and illustrated by the manga artist group Clamp. It takes place in the same fictional universe as many of Clamp's other manga series, most notably xxxHolic. The plot follows how Sakura, the princess of the Kingdom of Clow, loses all her memories and how Syaoran, a young archaeologist who is her childhood friend, goes on arduous adventures to save her, with two other companions. The Dimensional Witch Yūko Ichihara instructs him to go with two people, Kurogane and Fai D. Flowright. They search for Sakura's memories, which were scattered in various worlds in the form of angelic-like feathers, as retrieving them will help save her very being. Tsubasa was conceived when four Clamp artists wanted to create a manga series that connected all their previous works. They took the designs for the main protagonists from their earlier manga called Cardcaptor Sakura. 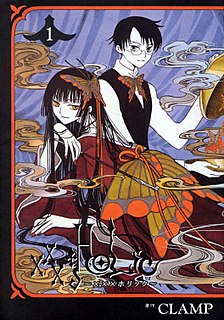 xxxHolic is a Japanese manga series written and illustrated by the manga group Clamp. The series, which crosses over with another Clamp work, Tsubasa: Reservoir Chronicle, revolves around Kimihiro Watanuki, a high school student who is disturbed by his ability to see the supernatural, and Yūko Ichihara, a powerful witch who owns a wish-granting shop. When Watanuki asks Ichihara to remove his ability to see spirits, she grants it on the condition that he pay for his wish by working for her. Clamp created xxxHolic to link the supernatural and fantasy series. From 2013 to 2016 they worked on a sequel series xxxHolic: Rei.

Clover is a manga series created by Clamp, a creative team made up by Satsuki Igarashi, Nanase Ohkawa, Tsubaki Nekoi, and Mokona. The manga takes place in a dystopian future, where the government is out to control the "Clovers", a race of children with special powers.

Tsubaki may refer to: 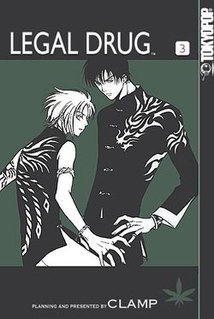 Legal Drug is a manga series by Clamp. The main artist in this serialization is Tsubaki Nekoi, formerly Mick Nekoi. It is published in Japan by Kadokawa Shoten and it is published in English by Tokyopop who have currently released 3 volumes as of 2005. The series is also known as Lawful Drugstore or Gouhou Drug in Japan. Since then, however, the license has lapsed, and Dark Horse Comics picked up the publishing rights in 2014. 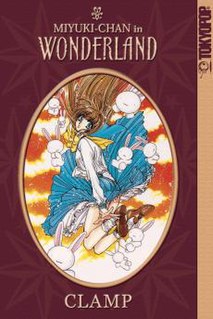 Miyuki-chan in Wonderland is a comedy, yuri manga written and illustrated by Clamp, an all-female manga artist team consisting of Satsuki Igarashi, Mokona, Tsubaki Nekoi, and Nanase Ohkawa. The story focuses on the eponymous protagonist, a Japanese high-school girl who finds herself pulled into various worlds populated by women who consider her appealing.

Legend of Chun Hyang is a manga by Clamp. Its story and characters are loosely based on a well known Korean folktale of the same name 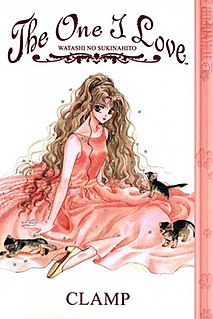 The One I Love is a romantic, slice-of-life shōjo manga by Clamp, an all-female, manga artist team consisting of Satsuki Igarashi, Mokona, Tsubaki Nekoi, and Nanase Ohkawa. Appearing as a monthly serial in the Japanese manga magazine Monthly Young Rose from December 1993 to June 1995, the twelve stories were collected into a bound volume by Kadokawa Shoten and published in July 1995. The One I Love contains twelve independent manga stories, each focusing on an aspect of love and accompanied by an essay. Ohkawa wrote the essays while Nekoi illustrated the manga; it was the first time she primarily illustrated a manga by Clamp. Some of the stories draw on the life experiences of the women while others take inspiration from conversations they had with friends.

Shirahime-Syo: Snow Goddess Tales is a supernatural manga by Clamp, a creative team made up by Satsuki Igarashi, Nanase Ohkawa, Tsubaki Nekoi and Mokona. It consists of three short stories, framed by a man's encounter with the titular character in the snow. The character design of the title character originated in a postcard in the team's newsletters, and later appeared in a preview page in the March 1992 issue of Bar Pretty, when only the concept had been finalized. Completed on a "tight" schedule, the volume was published in June 1992 by Kobunsha, and re-released in August 2001 by Kadokawa Shoten.

Clamp School Paranormal Investigators is a set of three illustrated novels written by Tomiyuki Matsumoto in collaboration with Japanese manga group, Clamp. These novels are based upon role-playing game sessions played by Game master Tomiyuki Matsumoto, Takeshi Okazaki and Clamp members. The main characters are based on player characters played in the game sessions. The novels were published by Tokyopop in North America in 2004 and 2005.

Mokona is the pen name of the lead artist, colorist, and composition designer of the all-female manga-creating team Clamp. She was formerly known as Mokona Apapa; she dropped her last name because it sounded too "immature". Clamp has had a huge impact on the "manga explosion" according to an account in the New York Times in 2006. Their artwork has been characterized as "wispy", "fluid" and "dramatic" which has resonated with both male and female demographic readers of manga. The Tsubasa manga sold more than a million copies in the United States, and television programs based on the concept have been successful as well as DVD spinoffs.

Yuko Ichihara is a fictional character from the manga xxxHolic created by the team Clamp. A powerful witch, Yuko is the owner of a shop where people come to have their wish granted and most of her jobs involve dealing with supernatural beings. In the beginning, she meets the teenager Kimihiro Watanuki who becomes her assistant as the price for removing spirits that are following here. She is also featured in the crossover manga Tsubasa: Reservoir Chronicle where she assists the main characters in their journey across the multiverse, and is known as "The Dimension Witch," a title that reflects her unique reach in time and space. She has also appeared in animated versions of the two series as well as other media.

Kimihiro Watanuki is a fictional character introduced in the manga xxxHolic, created by the group of manga artists known as Clamp. Watanuki is a high school student plagued by his ability to see spirits. In order to lose such powers, Watanuki begins to work for Yūko Ichihara, a witch who will grant his wish once he pays the price for her services. Such jobs often involve Watanuki encountering other spirits attracted by him. Apart from xxxHolic, Watanuki is featured in the crossover manga Tsubasa: Reservoir Chronicle, which explores his origins. He has also has been featured in their animated adaptations, spin-offs as well as other works by Clamp, most notably the sequel xxxHolic Rei.

Clamp in Wonderland is a series of music videos produced by Clamp, a creative team made up by Satsuki Igarashi, Nanase Ohkawa, Tsubaki Nekoi and Mokona.

Sakura (サクラ), also known as Princess Sakura, is a fictional character and one of the protagonists from Tsubasa: Reservoir Chronicle, a manga series written and illustrated by Clamp. In the series, Sakura is a princess from the Kingdom of Clow who has her memories separated from her body and sent to parallel dimensions in the form of feathers. Finding Sakura catatonic and near death, Syaoran, her childhood friend, goes on a quest to recover her memories. As a payment for travelling, Sakura will never recover her memories regarding Syaoran, who she was in love with. Nevertheless, as the journey continues, Sakura forms new bonds with Syaoran, and together they learn how the sorcerer Fei-Wang Reed was responsible for the loss of her memories and will benefit from their recovery. Besides Tsubasa: Reservoir Chronicle, Sakura also appears in other works from Clamp including xxxHolic and the drama CD series Holitsuba. 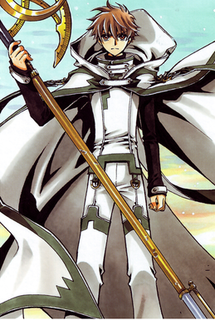 Tsubasa (ツバサ), usually called Syaoran is a fictional character from Clamp's manga series' Tsubasa: Reservoir Chronicle. In the series, the character is initially seen as child imprisoned by the sorcerer Fei-Wang Reed and appears in visions of the series' protagonist, the clone Syaoran. Upon being freed from his prison, Syaoran goes to kill his doppelgänger but fails as he escapes to carry Fei-Wang's will. As a result, Syaoran decides to join Sakura's journey across dimensions to accomplish his own mission. Syaoran also appears in the Clamp's series xxxHolic, where he often interacts with the teenager Kimihiro Watanuki whom he often sends messages to and in the Tsubasa spin-iff Tsubasa World Chronicle: Mirai Nikki-Hen he goes in another journey to find his clone.