Tsuchiyu Onsen (土湯温泉, Tsuchiyu-onsen) is a hot spring resort located approximately 16 kilometers west of the city centre of Fukushima, Fukushima, Japan. It is near the source and built along the shores of the Arakawa River, at the foot of Mt. Azuma.

The majority of Tsuchiyu's hot spring water comes out of the ground as steam at approximately 150 ℃ then is then piped two kilometers to Tsuchiyu's hotels. The water is largely colorless and clear, has faint traces of sulfur, and has a pH of 6.5. Some hotels receive their water from a separate source, leading to some hotels using water containing sodium bicarbonate or higher levels of sulfur. [1]

There are multiple ryokan and hotels in the area for guests to stay the night, along with four free ashiyu foot baths placed throughout the area. [2]

In the mid-19th century artisans in Tsuchiyu began producing wooden kokeshi dolls unique to the area. As Tsuchiyu lies at the mountains foot of Mt. Azuma, in the mid-19th century the route to Tsuchiyu was impassible for around four months a year due to heavy snow. Local craftsmen began to produce kokeshi dolls as a way to make extra money to make up for the lack of guests during these slow periods. [3]

Tsuchiyu kokeshi are distinguishable from other kokeshi due to have a smaller head, two black concentric circles on the top of the head, a small mouth, a rounded nose, a red ribbon painted on the hair, a thin body, and colored strips painted on the body using a potter's wheel. [4] 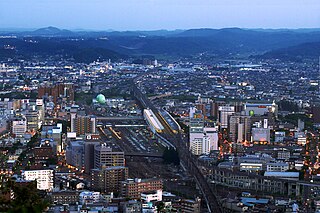 Fukushima is the capital city of Fukushima Prefecture, Japan. It is located in the northern part of the Nakadōri, central region of the prefecture. As of 1 May 2021, the city has an estimated population of 283,742 in 122,130 households and a population density of 370 inhabitants per square kilometre (960/sq mi). The total area of the city is 767.72 square kilometres (296.42 sq mi). 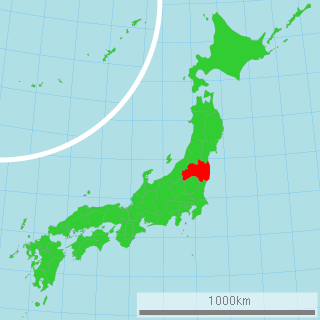 Nozawaonsen is a village located in Nagano Prefecture, Japan. As of 1 April 2019, the village had an estimated population of 3,653 in 1395 households and a population density of 63 persons per km². The total area of the village is 57.96 square kilometres (22.38 sq mi). 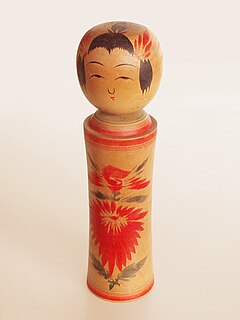 Kokeshi, are simple wooden Japanese dolls with no arms or legs that have been crafted for more than 150 years as a toy for children. Originally from the northeastern region (Tōhoku-chihō) of Japan, they are handmade from wood, having a simple trunk and head with a few thin, painted lines to define the face. The body often has floral and/or ring designs painted in red, black, and sometimes green, purple, blue, or yellow inks, and covered with a layer of wax. One characteristic of kokeshi dolls is their lack of arms or legs. Since the 1950s, kokeshi makers have signed their work, usually on the bottom and sometimes on the back.

Shikabe is a town located in Oshima Subprefecture, Hokkaido, Japan.

Asamushi Onsen (浅虫温泉) is the site of a hot spring, on the eastern edge of the city of Aomori in Aomori Prefecture, Japan. It was developed as the downtown beside the onsen town and is sometimes known as "Atami in Tohoku" after the famous Atami Onsen in Shizuoka, central Japan.

Asama Onsen (浅間温泉) is an onsen located in the city of Matsumoto, Nagano Prefecture, Japan. 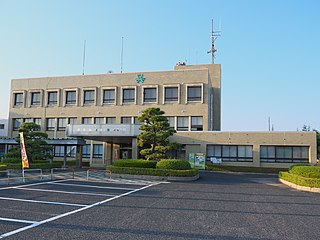 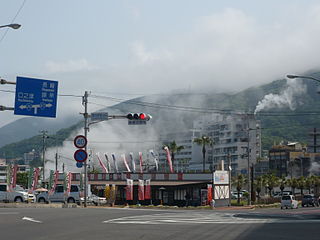 Obama Onsen (小浜温泉) is an onsen in Obama, Unzen, Nagasaki Prefecture, Japan. The hot springs system is located in the foothills of Mount Unzen Volcano.

Tourism Areas are areas or zones designated by the Japan Tourism Agency from 2008. As of April 2009, 30 Tourism Areas are located throughout Japan. The Japan Tourism Agency set the law in 2008 regarding this area to support and promote more synergistic activities among local governments, tourism associations, tourism industries and local hotels and other local organizations and individuals. 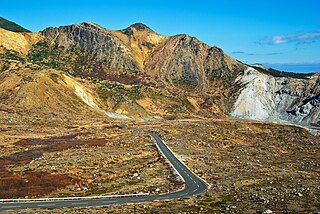 Takayu Onsen (高湯温泉) is a hot spring resort in the Zainiwasaka district of the city of Fukushima, Fukushima, Japan. It is in the mountains about 14 km west of Fukushima Station. 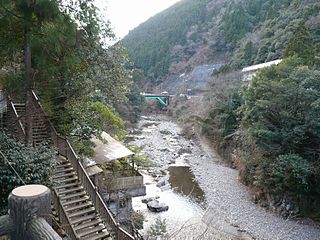 Ryūjin Onsen (龍神温泉) is an onsen located in Ryūjin village, now the part of Tanabe, Wakayama City in Wakayama Prefecture, Japan. Ryūjin Onsen was discovered in the 7th century by En no Gyōja, the founder of Shugendō. Kōbō Daishi, founder of Shingon Buddhism visited the spot in the 9th century. During the Edo period (1603-1868), the onsen was used as a resort area by the Tokugawa ruling family, whose castle was in Wakayama city. Today there are old Japanese inns (ryokans) using the names Kamigoten and Shimogoten, from the old feudal system. It is said to be the third best onsen for beautifying your skin in Japan. 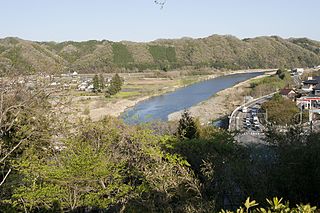 Kuji River is a river in Fukushima Prefecture, Tochigi Prefecture and Ibaraki Prefecture, Japan. It rises at the northern slope of Mount Yamizo, where the border of these three prefectures is located, and flows into Pacific Ocean at Hitachi and Tokai in Ibaraki Prefecture. It has a length of 124 kilometers (77 mi) and a drainage area of 1,490 square kilometers (580 sq mi), and is designated as a Class A river.

Nanki-Katsuura Onsen (南紀勝浦温泉) is a coastal onsen, or hot spring, located in Nachikatsuura, Wakayama Prefecture, Japan. Originally known as "Katsuura Onsen", the "Nanki-" was added to distinguish it from another onsen in Katsuura, Chiba.

Hawai Onsen (はわい温泉) is an onsen in the town of Yurihama, Tōhaku District, in Japan’s Tottori Prefecture. In recent years, it is the fourth most popular onsen in the prefecture, following Kaike Onsen, Misasa Onsen, and Yoshioka Onsen. It forms part of Misasa-Tōgōko Prefectural Natural Park, and some of the onsen district’s lakeside area sits within Lake Tōgō Hawai Seaside Park.