The Tsugaru Strait (津軽海峡, Tsugaru Kaikyō) is a strait between Honshu and Hokkaido in northern Japan connecting the Sea of Japan with the Pacific Ocean. It was named after the western part of Aomori Prefecture. The Seikan Tunnel passes under it at its narrowest point 12.1 miles (19.5 km) between Tappi Misaki on the Tsugaru Peninsula in Aomori Prefecture, Honshu, and Shirakami Misaki on the Matsumae Peninsula in Hokkaido.

Western maps made prior to the 20th century also referred to this waterway as the Strait of Sangar. [1]

Japan's territorial waters extend to three nautical miles (5.6 km) into the strait instead of the usual twelve, reportedly to allow nuclear-armed United States Navy warships and submarines to transit the strait without violating Japan's prohibition against nuclear weapons in its territory. [2] The part of the Seikan Tunnel that passes under the strait is considered to be under Japanese jurisdiction. The part of the Tsugaru Strait considered to be in international waters is still within Japan's exclusive economic zone. [3]

The Tsugaru Strait has eastern and western necks, both approximately 20 km across with maximum depths of 200 m and 140 m respectively. [4]

There are also ferry services that operate across the strait, including the Tsugaru Kaikyō Ferry and the Seikan ferry.

Thomas Blakiston, an English explorer and naturalist, noticed that animals in Hokkaido were related to northern Asian species, whereas those on Honshu to the south were related to those from southern Asia. The Tsugaru Strait was therefore established as a major zoogeographical boundary, and became known as Blakiston's Line or the "Blakiston Line". [6] 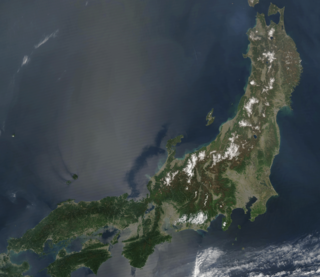 Honshu, historically called Hondo, is the largest and most populous main island of Japan. It is located south of Hokkaidō across the Tsugaru Strait, north of Shikoku across the Inland Sea, and northeast of Kyūshū across the Kanmon Straits. The island separates the Sea of Japan, which lies to its north and west, from the North Pacific Ocean to the south and east. It is the seventh-largest island in the world, and the second-most populous after the Indonesian island of Java.

Aomori Prefecture is a prefecture of Japan in the Tōhoku region. The prefecture's capital, largest city, and namesake is the city of Aomori. Aomori is the northernmost prefecture on Japan's main island, Honshu, and is bordered by the Pacific Ocean to the east, Iwate Prefecture to the southeast, Akita Prefecture to the southwest, the Sea of Japan to the west, and Hokkaido across the Tsugaru Strait to the north. Aomori Prefecture is the 8th-largest prefecture, with an area of 9,645.64 km2 (3,724.20 sq mi), and the 31st-most populous prefecture, with more than 1.2 million people. Approximately 45 percent of Aomori Prefecture's residents live in its two core cities, Aomori and Hachinohe, which lie on coastal plains. The majority of the prefecture is covered in forested mountain ranges, with population centers occupying valleys and plains. Aomori is the third-most populous prefecture in the Tōhoku region, after Miyagi Prefecture and Fukushima Prefecture. Mount Iwaki, an active stratovolcano, is the prefecture's highest point, at almost 1,624.7 m (5,330 ft).

The Seikan Tunnel, is a 53.85 km (33.46 mi) dual-gauge railway tunnel in Japan, with a 23.3 km (14.5 mi) portion under the seabed of the Tsugaru Strait, which separates Aomori Prefecture on the main Japanese island of Honshu from the northern island of Hokkaido. The track level is about 100 m (330 ft) below the seabed and 240 m (790 ft) below sea level. The tunnel is part of the standard-gauge Hokkaido Shinkansen and the narrow-gauge Kaikyō Line of the Hokkaido Railway Company 's Tsugaru-Kaikyō Line. The name Seikan comes from combining the on'yomi readings of the first characters of Aomori (青森), the nearest major city on the Honshu side of the strait, and Hakodate (函館), the nearest major city on the Hokkaido side. 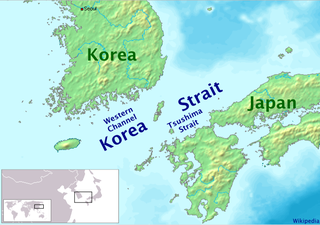 Tsushima Strait or Eastern Channel is a channel of the Korea Strait, which lies between Korea and Japan, connecting the Sea of Japan, the Yellow Sea, and the East China Sea. 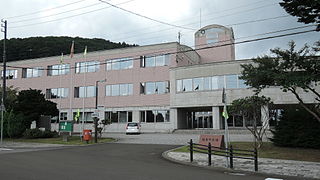 Fukushima is a town located in Oshima Subprefecture, Hokkaido, Japan.

Shiriuchi is a town located in Oshima Subprefecture, Hokkaido, Japan.

Kikonai is a town located in Oshima Subprefecture, Hokkaido, Japan.

The Kaikyō Line is an 87.8-kilometer long railway line operated mainly by the Hokkaido Railway Company. The line connects Naka-Oguni Station in Sotogahama, Aomori, through the Seikan Tunnel between Honshu and Hokkaido, to Kikonai Station in Kikonai, Hokkaido. Two stations on the Tsugaru-Kaikyō Line, Tappi-Kaitei Station and Yoshioka-Kaitei Station, were inside the tunnel.

Tsugaru (津軽) may refer to:

Yoshioka-Kaitei Station was a railway station on the Kaikyo Line in Fukushima, Hokkaido, Japan, operated by Hokkaido Railway Company. The station was underground and was located within the Seikan Tunnel under the Tsugaru Strait linking the main Japanese island of Honshu with the northern island of Hokkaido. The station was located 149.5 metres (490 ft) below sea level, making it the deepest underground station in the world.

Tappi-Kaitei Station was a railway station on the Kaikyo Line in Sotogahama, Aomori, Japan, operated by Hokkaido Railway Company. The station is located within the Seikan Tunnel below the seabed of the Tsugaru Strait linking the main Japanese island of Honshu with the northern island of Hokkaido. It was closed to passengers from November 10, 2013, to make way for the construction of the Hokkaido Shinkansen high-speed train line. It is an emergency escape point.

The Tsugaru-Kaikyō Line was a railway line in northern Japan that linked Aomori Station in Aomori Prefecture and Hakodate Station in Hokkaido.

National Route 338 is a national highway in the Japanese prefectures of Hokkaido and Aomori. Route 338 stretches 241.3 kilometers (149.9 mi) from National Route 5 in Hakodate, Hokkaido south across the Tsugaru Strait by ferry to Ōma, Aomori, around the western, southern, and eastern edges of the Shimokita Peninsula and finally to Oirase.

The Tsugaru Line is a railway line operated by East Japan Railway Company. It connects Aomori Station and Minmaya Station on the Tsugaru Peninsula in western Aomori Prefecture.

The Seikan Ferry (青函フェリー) is a privately owned ferry service crossing the Tsugaru Strait, which separates the Japanese islands of Hokkaido and Honshu. The company, Seikan Ferry Ltd. (有限会社青函フェリー), was founded in 1973 and runs between the cities of Aomori on the northern tip of Honshu and Hakodate in southern Hokkaido.

The Tsugaru Kaikyō Ferry is a privately owned ferry service crossing the Tsugaru Strait, which separates Hokkaido from Honshu. The ferries run two routes: Hakodate to Aomori and Hakodate to Ōma.

The Tōya Maru accident is a marine accident that occurred in Japan in September 1954.