The Tsugaru dialect is reputed to be so divergent from standard Japanese for those who are not native speakers, that even people living in the same prefecture may have trouble understanding it. In 1988, fans of the Tsugaru dialect proclaimed October 23 to be Tsugaru Dialect Day (津軽弁の日, Tsugaru-ben no hi). October 23 is the anniversary of the death of Kyōzō Takagi (ja:高木恭造), a famous poet who wrote in the Tsugaru dialect.

In Tsuruta, there is an annual summer Tsugaru-ben competition (津軽弁大会, Tsugaru-ben taikai) in which teams of foreigners create short skits or performances, usually humorous, using the dialect. In June 2009, a short segment featuring the competition was broadcast nationally on NHK.

The words are sometimes very different from those of standard Japanese.

Aomori Prefecture is a prefecture of Japan in the Tōhoku region. The prefecture's capital, largest city, and namesake is the city of Aomori. Aomori is the northernmost prefecture on Japan's main island, Honshu, and is bordered by the Pacific Ocean to the east, Iwate Prefecture to the southeast, Akita Prefecture to the southwest, the Sea of Japan to the west, and Hokkaido across the Tsugaru Strait to the north. Aomori Prefecture is the 8th-largest prefecture, with an area of 9,645.64 km2 (3,724.20 sq mi), and the 31st-most populous prefecture, with more than 1.2 million people. Approximately 45 percent of Aomori Prefecture's residents live in its two core cities, Aomori and Hachinohe, which lie on coastal plains. The majority of the prefecture is covered in forested mountain ranges, with population centers occupying valleys and plains. Aomori is the third-most populous prefecture in the Tōhoku region, after Miyagi Prefecture and Fukushima Prefecture. Mount Iwaki, an active stratovolcano, is the prefecture's highest point, at almost 1,624.7 m (5,330 ft).

Tsugaru Quasi-National Park is a quasi-national park in Aomori Prefecture in the far northern Tōhoku region of Honshū in Japan. It is rated a protected landscape according to the IUCN. The park includes a number of discontinuous areas on Tsugaru Peninsula, including the volcanic peaks of Mount Iwaki, a portion of the primeval Siebold's beech forests of Shirakami-Sanchi UNESCO World Heritage Site, Cape Tappi, other coastal areas of northern Tsugaru Peninsula, and the wetlands of Juniko and Jusanko lakes and marshes.

Tsugaru (津軽) may refer to:

Mount Iwaki is a stratovolcano located in western Aomori Prefecture, Tohoku, Japan. It is also referred to as Tsugaru Fuji (津軽富士) and less frequently, Okufuji (奥富士) due to its similar shape to Mount Fuji. With a summit elevation of 1,625 meters (5,331 ft) and a prominence of 1,322 meters (4,337 ft) it is the highest mountain in Aomori Prefecture.

Kuroishi Domain was a tozama feudal domain under the Tokugawa shogunate of Edo period Japan. It is located in northwestern Mutsu Province, Honshū. Its territory included 2000 koku in the area around present-day city of Kuroishi, 1000 koku in present-day Hiranani, and 2000 koku in what is now part of Ōta, Gunma. The domain was centered at Kuroishi Jin'ya, located in the center of what is now the city of Kuroishi in Aomori Prefecture. 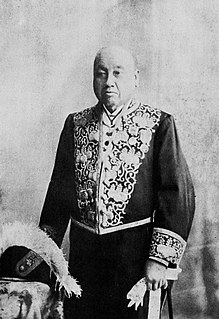 CountTsugaru Tsuguakira was the 12th and final daimyō of Hirosaki Domain in northern Mutsu Province, Honshū, Japan. His courtesy title was Tosa-no-kami, which was later upgraded to Etchū-no-kami and Jiju, and his Court rank under the Tokugawa shogunate was Junior Fourth Rank, Lower Grade.

Tsugaru Yukitsugu was the 2nd daimyō of Kuroishi Domain, and later the 11th daimyō of Hirosaki Domain in northern Mutsu Province, Honshū, Japan. His courtesy title was Ōsumi-no-kami, and his Court rank was Junior Fourth Rank, Lower Grade.

Tsugaru Nobuakira was the 8th daimyō of Hirosaki Domain in northern Mutsu Province, Honshū, Japan. His courtesy title was Tosa-no-kami, and his Court rank was Junior Fifth Rank, Lower Grade. 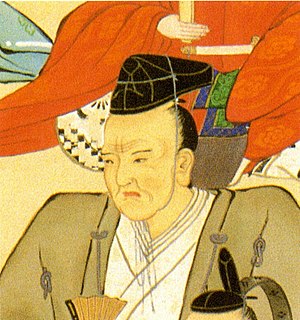 Tsugaru Nobuyuki was the 10th daimyō of Hirosaki Domain in northern Mutsu Province, Honshū, Japan. His courtesy title was Dewa-no-kami, to which was later added title Jujū, and his Court rank was Junior Fourth Rank, Lower Grade. 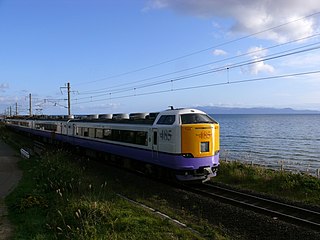 The Tsugaru Line is a railway line operated by East Japan Railway Company. It connects Aomori Station and Minmaya Station on the Tsugaru Peninsula in western Aomori Prefecture.

Tsugaru Chikatari was the 1st daimyō of Kuroishi Domain in northern Mutsu Province, Honshū, Japan. His courtesy title was Kai-no-kami, and his Court rank was Junior Fifth Rank, Lower Grade.

Tsugaru Tsuguyasu was the 3rd daimyō of Kuroishi Domain in northern Mutsu Province, Honshū, Japan. His courtesy title was Izumo-no-kami, and his Court rank was Junior Fifth Rank, Lower Grade. 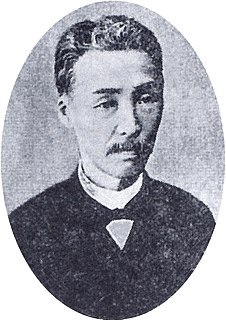 Tsugaru Tsugumichi was the fourth and final daimyō of Kuroishi Domain in northern Mutsu Province, Honshū, Japan. His courtesy title was Shikibu-no-shō, and his Court rank under the Tokugawa shogunate was Junior Fifth Rank, Lower Grade. 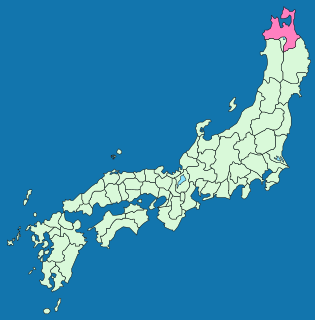 Mutsu Province, officially called Rikuō Province was an old province of Japan in the area of Iwate and Aomori prefecture.

The Tōhoku dialect, commonly called 東北弁 Tōhoku-ben, is a group of the Japanese dialects spoken in the Tōhoku region, the northeastern region of Honshū. Toward the northern part of Honshū, the Tōhoku dialect can differ so dramatically from standard Japanese that it is sometimes rendered with subtitles in the nationwide media and it has been treated as the typical rural accent in Japanese popular culture.

The Tsugaru Expressway is a two-lane national expressway in Aomori Prefecture, Japan. The expressway connects the prefecture's capital, Aomori, and the Tōhoku Expressway to the municipalities of Goshogawara, Tsugaru and, Ajigasawa. It is owned and operated by Ministry of Land, Infrastructure, Transport and Tourism and is signed as an auxiliary route of National Route 101 as well as E64 under their "2016 Proposal for Realization of Expressway Numbering."

The Tsugaru Iwaki Skyline is a toll road managed and operated by Iwaki Skyline Co., Ltd. in Hirosaki, Japan. It partially ascends Mount Iwaki and is notable for its steep gradient and 69 hairpin turns, which make it considered as one of the most dangerous mountain roads in the world.