Tsuguhiro Hattori (服部受弘,February 23,1920 –December 6,1991) was a prominent Japanese Nippon Professional Baseball player who excelled as a pitcher and was the first Chunichi Dragons pitcher to reach 100 wins. He played with the Dragons franchise his entire career. His number 10 jersey is one of only two retired by the team.

Hattori attended Nihon University. Hattori debuted with Nagoya at the age of 19 in 1939 firstly as a catcher and captured hearts and minds by becoming home run champion in his third year.

After the war,at the behest of his manager,Yoshikazu Takeuchi,he took up and found success as a pitcher. On his off days he would revert to being catcher due to a lack of players. After that year,he never had a season with less than 10 wins (except for 1951 and 1953) and in 1949 he put up 24 in 30 starts. In 1950,behind Dragons ace Shigeru Sugishita he put up another impressive season on the mound with a further 21 wins. From 1951,Hattori would move from behind the plate to take up third base duties along with his pitching.

Hattori finished his career in 1958 having played 258 matches,achieving 112 wins and 65 losses with an ERA of 2.85. He was the first player in Dragons history to reach 100 wins.

On August 12,1952,in a game against the Yomiuri Giants,Hattori would come in as a pinch-hitter hitting a grand slam against Giants ace Takehiko Bessho. Hattori would later approach the mound and close out the game as winning pitcher.

After retirement Hattori had moderate success as a coach and scout,as well as the occasional television appearance on Professional Baseball News. His number 10 was retired by the Dragons along with teammate Michio Nishizawa.

Unable to throw a curveball,Hattori found the majority of his success with a cutter delivery. 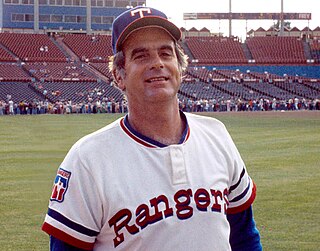 Gaylord Jackson Perry is an American former professional baseball player. He played in Major League Baseball as a right-handed pitcher for eight different teams from 1962 to 1983. During a 22-year baseball career,Perry compiled 314 wins,3,534 strikeouts,and a 3.11 earned run average. He was elected to the Baseball Hall of Fame in his third year of eligibility in 1991.

In baseball,the pitcher is the player who pitches the baseball from the pitcher's mound toward the catcher to begin each play,with the goal of retiring a batter,who attempts to either make contact with the pitched ball or draw a walk. In the numbering system used to record defensive plays,the pitcher is assigned the number 1. The pitcher is often considered the most important player on the defensive side of the game,and as such is situated at the right end of the defensive spectrum. There are many different types of pitchers,such as the starting pitcher,relief pitcher,middle reliever,lefty specialist,setup man,and the closer.

Warren Edward Spahn was an American professional baseball player. He played in Major League Baseball as a left-handed pitcher in 1942 and then from 1946 until 1965,most notably for the Boston Braves,who became the Milwaukee Braves after the team moved west before the 1953 season. His baseball career was interrupted by his military service in the United States Army during the Second World War.

The rules of baseball differ slightly from league to league,but in general share the same basic game play.

The following are the baseball events of the year 2004 throughout the world.

Paul Rapier Richards was an American professional baseball player,manager,scout and executive in Major League Baseball. During his playing career,he was a catcher and right-handed batter with the Brooklyn Dodgers (1932),New York Giants (1933–1935),Philadelphia Athletics (1935) and Detroit Tigers (1943–1946). After retiring,he became the manager of the Chicago White Sox and Baltimore Orioles (1955–1961). He also served as the general manager for the Orioles,the Houston Colt .45s / Astros and the Atlanta Braves.

Masaichi Kaneda was a Zainichi Korean–Japanese professional baseball pitcher,one of the best-known pitchers in Japanese baseball history,and is the only Japanese pitcher to have won 400 games. He was inducted in the Japanese Baseball Hall of Fame in 1988.

The following are the baseball events of the year 2000 throughout the world.

The following are the baseball events of the year 1998 throughout the world. 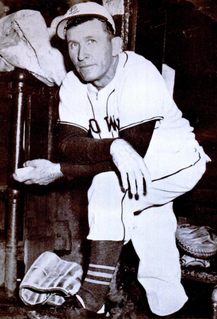 James Wren "Zack" Taylor was an American professional baseball player,coach,scout and manager. He played in Major League Baseball as a catcher with the Brooklyn Robins,Boston Braves,New York Giants,Chicago Cubs,New York Yankees,and again with the Brooklyn Dodgers. Although Taylor was not a powerful hitter,he sustained a lengthy career in the major leagues due to his valuable defensive abilities as a catcher. After his playing career,he became better known as the manager for the St. Louis Browns owned by Bill Veeck. His baseball career spanned 58 years.

Farid Yu Darvishsefat,more commonly known as Yu Darvish,is an Iranian-Japanese professional baseball pitcher for the San Diego Padres of Major League Baseball (MLB). Darvish has also played in MLB for the Texas Rangers,Los Angeles Dodgers,and Chicago Cubs and in Nippon Professional Baseball for the Hokkaido Nippon-Ham Fighters. In international play,Darvish pitched in the 2008 Beijing Olympics and the 2009 World Baseball Classic as a member of the Japanese national team.

James Edward Hegan was an American professional baseball player,coach,and scout. He played for 17 seasons as a catcher in Major League Baseball (MLB) from 1941 to 1942 and 1946 to 1960,most notably for the Cleveland Indians with whom he won a World Series in 1948. Although Hegan was a light-hitting player,he was notable for being one of the best defensive catchers of his era and a capable handler of pitching staffs,earning five All-Star selections. After retiring as a player,he continued to serve as a major league coach in a baseball career that spanned almost 40 years. 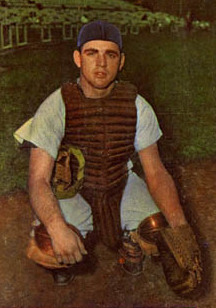 This is an alphabetical list of selected unofficial and specialized terms,phrases,and other jargon used in baseball,along with their definitions,including illustrative examples for many entries. 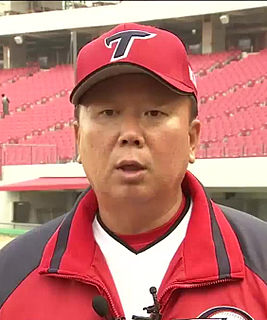 Sun Dong-yol is a South Korean retired baseball pitcher and former manager. He was a pitcher in the KBO League and Nippon Professional Baseball,and the former manager of the Samsung Lions and the Kia Tigers in the KBO.

The 1951 National League tie-breaker series was a best-of-three playoff series at the conclusion of Major League Baseball's (MLB) 1951 regular season to decide the winner of the National League (NL) pennant. The games were played on October 1,2,and 3,1951,between the New York Giants and Brooklyn Dodgers. It was necessary after both teams finished the season with identical win–loss records of 96–58. It is most famous for the walk-off home run hit by Bobby Thomson of the Giants in the deciding game,which has come to be known as baseball's "Shot Heard 'Round the World".

Akira Noguchi was a Japanese baseball pitcher,infielder,catcher,and manager who played 15 total seasons in the Japanese Baseball League and then Nippon Professional Baseball,during the period 1936 to 1955. The rare two-way player,Noguchi was particularly unusual in that he excelled in the specialized positions of both pitcher and catcher.