Tsuguo Hongo (本郷 次雄, Hongō Tsuguo, November 1, 1923 – April 2, 2007) was a Japanese mycologist who specialized in the biogeography and taxonomy of Agaricales. Hongo entered the Department of Biology at what is now Hiroshima University in 1943, where he studied botany until graduating in 1946 with a B.Sc. Hongo received his Ph.D. degree, entitled "Agaricales of Japan", from Kyoto University in 1961 while working under Dr. Shiro Kitamura.

He was president of the Mycological Society of Japan from 1987 to 1989. In 2003 he was awarded the Minakata Kumagusu Award for contributions to mycology. Hongo published more than 130 scientific papers and 9 books. He also described 215 new taxa of Agaricales from a variety of locations. Fungus species named after Hongo include: Amanita hongoi , [1] Boletus hongoi , [2] Xerula hongoi , [3] Pluteus hongoi , [4] Russula hongoi , [4] Strobilomyces hongoi , [5] and Tylopilus hongoi . [6]

The standard author abbreviation Hongo is used to indicate this person as the author when citing a botanical name. [7] 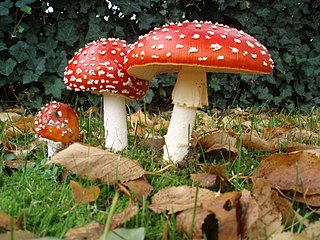 Amanita muscaria, commonly known as the fly agaric or fly amanita, is a basidiomycete of the genus Amanita. It is also a muscimol mushroom. Native throughout the temperate and boreal regions of the Northern Hemisphere, Amanita muscaria has been unintentionally introduced to many countries in the Southern Hemisphere, generally as a symbiont with pine and birch plantations, and is now a true cosmopolitan species. It associates with various deciduous and coniferous trees.

Tylopilus is a genus of over 100 species of mycorrhizal bolete fungi separated from Boletus. Its best known member is the bitter bolete, the only species found in Europe. More species are found in North America, such as the edible species T. alboater. Australia is another continent where many species are found. All members of the genus form mycorrhizal relationships with trees. Members of the genus are distinguished by their pinkish pore surfaces.

Galerina marginata, known colloquially as funeral bell, deadly skullcap, autumn skullcap or deadly galerina, is a species of extremely poisonous mushroom-forming fungus in the family Hymenogastraceae of the order Agaricales. It contains the same deadly amatoxins found in the death cap. Ingestion in toxic amounts causes severe liver damage with vomiting, diarrhea, hypothermia, and eventual death if not treated rapidly. About ten poisonings have been attributed to the species now grouped as G. marginata over the last century.

Gastón Guzmán Huerta, a Mexican mycologist and anthropologist, was an authority on the genus Psilocybe.

Orson Knapp Miller Jr. was an American mycologist. He published numerous papers in mycology and was responsible for the naming of many taxa, as well as being one of the authors erecting the genus Chroogomphus. He described Omphalotus olivascens, several species of Amanita, and the ghoul fungus Hebeloma aminophilum.

Entoloma hochstetteri, also known as the blue pinkgill, sky-blue mushroom or similar names, is a species of mushroom that is native to New Zealand. The small mushroom is a distinctive all-blue colour, while the gills have a slight reddish tint from the spores. The blue colouring of the fruit body is due to three azulene pigments. Whether Entoloma hochstetteri is poisonous or not is unknown.

Boletellus is a genus of fungi in the family Boletaceae. The genus has a widespread distribution, especially in subtropical regions, and contains about 50 species. The genus was first described by American mycologist William Alphonso Murrill in 1909. The genus name means "small Boletus".

Amanita abrupta, commonly known as the American abrupt-bulbed amanita or the American abrupt-bulbed lepidella, is a species of fungus in the family Amanitaceae. Named for the characteristic shape of its fruit bodies, this white Amanita has a slender stem, a cap covered with conical white warts, and an "abruptly enlarged" swollen base. This terrestrial species grows in mixed woods in eastern North America and eastern Asia, where it is thought to exist in a mycorrhizal relationship with a variety of both coniferous and deciduous tree species. 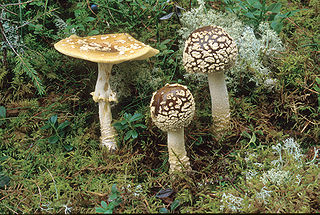 Amanita regalis, commonly known as the royal fly agaric or the king of Sweden Amanita, is a species of fungus in the family Amanitaceae. Common in Scandinavian countries, it is also found in eastern and northern Europe. In North America, its distribution is restricted to Alaska. The fruit bodies of the fungus somewhat resemble the fly agaric, and it was formerly regarded as a variety of this species. A. regalis differs from it in being larger, with a liver-brown cap bearing numerous scabs, and in having a stem which is yellow-ochre at the base, with patches or rings of patches. Chemical analysis has shown that this species contains muscimol, the same psychoactive compound found in A. muscaria.

Tylopilus plumbeoviolaceus, commonly known as the violet-grey bolete, is a fungus of the bolete family. First described in 1936, the mushroom has a disjunct distribution, and is distributed in eastern North America and Korea. The fruit bodies of the fungus are violet when young, but fade into a chocolate brown color when mature. They are solid and relatively large—cap diameter up to 15 cm (5.9 in), with a white pore surface that later turns pink, and a white mycelium at the base of the stem. The mushroom is inedible. A number of natural products have been identified from the fruit bodies, including unique chemical derivatives of ergosterol, a fungal sterol.

Daphnella nobilis is a species of sea snail, a marine gastropod mollusk in the family Raphitomidae. 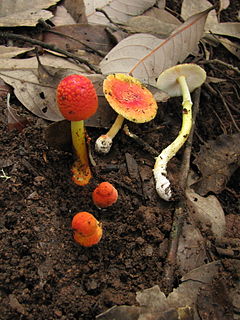 Amanita rubrovolvata, commonly known as the red volva amanita, is a species of fungus in the family Amanitaceae. First described scientifically by the Japanese mycologist S. Imai in 1939, it is widely distributed in eastern Asia. The fungus produces small to medium-sized mushrooms, with reddish-orange caps up to 6.5 mm (0.26 in) wide. The stems are up to 100 mm (3.9 in) tall, cream above the ring and cream to yellowish below it. The stem ends in a roughly spherical bulb at the base, which is covered with bright orange patches. Neither edibility nor toxicity have been established for the fungus, but it is suspected to be associated with neurological anomalies. Several molecular studies have confirmed the mushroom's classification in the subgenus Amanita of the genus Amanita, along with closely related species such as A. muscaria.

Aseroe coccinea is a species of stinkhorn fungus in the genus Aseroe. First reported in Japan in 1989, it was not formally validated as a species until 2007, the delay related to a publication error. The receptacle, or fruit body, begins as a partially buried whitish egg-shaped structure, which bursts open as a hollow white stipe with reddish arms, then erupts and grows to a height of up to 15 mm (0.6 in). It matures into a star-shaped structure with seven to nine thin reddish tubular "arms" up to 10 mm (0.4 in) long radiating from the central area. The top of the receptacle is covered with dark olive-brown spore-slime, or gleba. A. coccinea can be distinguished from the more common species A. rubra by differences in the color of the receptacle, and in the structure of the arms. The edibility of the fungus has not been reported.

Amanita ceciliae, commonly called snakeskin grisette, strangulated amanita, and the Cecilia's ringless amanita, is a basidiomycete fungus in the genus Amanita. First described in 1854 by Miles Joseph Berkeley and Christopher Edmund Broome, it was given its current name by Cornelis Bas in 1984. It is characterized by bearing a large fruit body with a brown cap 5–12 cm (2.0–4.7 in) across. The cap has charcoal-grey patches, which are easily removable. The stipe is 7–18 cm (2.8–7.1 in) long, white in colour, and there is no ring on it. It is slightly tapered to the top, and has irregular cottony bands girdling the base. The universal veil is grey. Spores are white, spherical in shape, non-amyloid, and measure 10.2–11.7 micrometres. The mushrooms are considered edible, but field guides typically advise caution in selecting them for consumption, due to risks of confusion with similar toxic species. A. ceciliae is found in woods throughout Europe and North America, where it fruits during summer and autumn.

Amanita zambiana, commonly known as the Zambian slender Caesar, is a basidiomycete fungus in the genus Amanita. An edible mushroom, it is found in Africa, where it is commonly sold in markets.

Amanita sphaerobulbosa, commonly known as the Asian abrupt-bulbed Lepidella, is a species of agaric fungus in the family Amanitaceae. First described by mycologist Tsuguo Hongo in 1969, it is found in Southern Asia. The species was formerly consider synonymous with the North American lookalike Amanita abrupta, but that species has narrower spores, a persistent partial veil, and lacks the refractive contents found in the hyphae and inflated cells of A. sphaerobulbosa.

Harrya chromapes, commonly known as the yellowfoot bolete or the chrome-footed bolete, is a species of bolete fungus in the family Boletaceae. The bolete is found in eastern North America, Costa Rica, and eastern Asia, where it grows on the ground, in a mycorrhizal association with deciduous and coniferous trees. Fruit bodies have smooth, rose-pink caps that are initially convex before flattening out. The pores on the cap undersurface are white, aging to a pale pink as the spores mature. The thick stipe has fine pink or reddish dots (scabers), and is white to pinkish but with a bright yellow base. The mushrooms are edible but are popular with insects, and so they are often infested with maggots.

Amanita fuliginea, commonly known as the east Asian brown death cap, is a species of deadly poisonous mushroom in the family Amanitaceae. It was described as new to science by Japanese mycologist Tsuguo Hongo in 1953. Fruit bodies have convex, dark gray to blackish caps measuring 3–6 cm (1.2–2.4 in) in diameter. The gills, largely free from attachment to the stipe, are white and have short gills (lamellulae) interspersed. The spores are roughly spherical, amyloid, and typically measure 8–11 by 7–9.5 µm. The mushroom is common in China, where it has caused poisonings, a review of cases in southern China finding it had been responsible for the poisoning of 352 people, 79 of which died, between 1994 and 2012.

Paraxerula is a genus of fungi in the family Physalacriaceae. It was circumscribed in 2010 by mycologist Ron Petersen to replace Xerula section Hyalosetae, proposed by Heinrich Dörfelt in 1984. Petersen originally included P. caussei, P. hongoi, and the type species P. americana. The Chinese species P. ellipsospora was added to the genus in 2014.

Veronica japonensis is a species of flowering plant in the genus Veronica of the family Plantaginaceae. It was described by Tomitaro Makino.