Tsujimura (辻村) is a Japanese surname. Notable people with the surname include:

Japanese names in modern times usually consist of a family name (surname), followed by a given name. More than one given name is not generally used. Japanese names are usually written in kanji, which are characters usually Chinese in origin but Japanese in pronunciation. The kanji for a name may have a variety of possible Japanese pronunciations, hence parents might use hiragana or katakana when giving a birth name to their newborn child. Names written in hiragana or katakana are phonetic renderings, and so lack the visual meaning of names expressed in the logographic kanji.

La Seine no Hoshi is an anime series by Sunrise, which premiered in Japan on Fuji TV from April 4, 1975 and finished its run on December 26, 1975, spanning a total of 39 episodes. The title translates to English as "Star of the Seine" or "The Seine's Stars." It is based on Alain Delon's 1963 movie La Tulipe noire.

81 Produce is a voice talent management firm in Japan founded on 3 February 1981. A hybrid CD-ROM featuring voice talent data for members of 81 Produce was released on 19 October 1997. The company is located Shibuya, Tokyo. 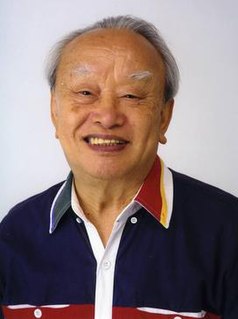 Mahito Tsujimura was a Japanese actor and voice actor who was represented by 81 Produce. Tsujimura died on November 27, 2018.

The Best Bad Thing was originally a book authored by Yoshiko Uchida. A screenplay was developed and a film released in 1997. The story is set on the U.S. west coast during 1935 when the U.S. economy was still recovering from the effects of the Great Depression. It opens in a city, then moves to a rural cucumber farm, where the majority of the action takes place. The farm is described as along California's central coast.

Gallocatechol or gallocatechin (GC) is a flavan-3-ol, a type of chemical compound including catechin, with the gallate residue being in an isomeric trans position. It is one of the antioxidant chemicals found in food.

Tomomi Manako is a Japanese former professional motorcycle racer. He competed in Grand Prix motorcycle racing from 1994 to 1999. Manako is notable for finishing in the top three of the 125cc world championship for three consecutive years, narrowly missing out on the title in 1998.

Takeshi Tsujimura is a former Grand Prix motorcycle road racer from Japan. Tsujimura began his Grand Prix career in 1993 with Yamaha. He enjoyed his best season in 1994 when he won four races and finished the season in third place behind Kazuto Sakata and Noboru Ueda in the 125cc world championship. In 2006, he teamed with Shinichi Itoh to win the Suzuka 8 Hours endurance race.

Twilight of the Cockroaches is a 1987 anime/live-action film written and directed by Hiroaki Yoshida that combines live-action footage with animation. The plot concerns a society of cockroaches who live peacefully in the apartment of a bachelor named Seito, until a woman moves in and the humans begin to exterminate the cockroaches. The cockroaches are depicted through animation, and the humans are depicted through live-action footage. Famed Japanese illustrator Yoshitaka Amano worked on the film as an art director and character designer.

Honjitsu wa Taian Nari (本日は大安なり) is a Japanese television drama series based on the Mizuki Tsujimura's novel. It premiered on NHK on January 10, 2012, starring Yūka in the lead role.

The Mephisto Prize is a Japanese literary award for unpublished genre fiction novels, mainly for mystery novels. It was established in 1996 by the editors of Mephisto magazine and is awarded on an irregular basis. The winning work is published by Kodansha and the winner receives a statue of Sherlock Holmes. 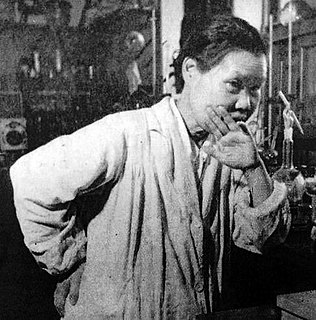 Michiyo Tsujimura was a Japanese agricultural scientist and biochemist whose research focused on the components of green tea. She was the first woman in Japan to receive a doctoral degree in agriculture.

Mizuki Tsujimura is a Japanese writer from Fuefuki, Yamanashi.

Doraemon the Movie 2019: Nobita's Chronicle of the Moon Exploration is a Japanese science-fiction anime film. It was premiered on March 1, 2019. It is directed by Shinnosuke Yakuwa and screenplay by Mizuki Tsujimura.

Shiro Tsujimura is a Japanese contemporary ceramic artist. New York Times commends his work with the following words: "For a look at some of the most expressive abstract painting around, check out the new ceramics by the Japanese artist Shiro Tsujimura at Koichi Yanagi. Mr. Tsujimura, who was born in 1947 and trained in a Zen temple before becoming a potter, is self-taught, prolific and wide open to all kinds of traditional styles and forms, which he makes entirely his own".

Mahito is a masculine Japanese given name. Notable people with the name include: