"Tsukiatteru no ni Kataomoi" (付き合ってるのに片思い) is the 15th single by the Japanese girl idol group Berryz Kobo. It was released in Japan on November 28, 2007, and debuted at number 6 in the weekly Oricon singles chart. [1] [2]

5 (FIVE) is the fifth album by the Japanese girl group Berryz Kobo, released on September 10, 2008 in Japan and September 17, 2008 in South Korea. It was released both as a normal edition, with only the CD, and a limited edition, with a DVD included.

"Otakebi Boy Wao!/Tomodachi wa Tomodachi Nanda!" is the 22nd single by Berryz Kobo. The single was released on March 3, 2010, with the A-side Single V following on March 10. It was released in four editions: a regular edition, containing only the CD, and three limited editions, A, B and C. Limited editions A and B contained a bonus DVD, while edition C contained a special "Inazuma Eleven" trading card. All three limited editions included a serial number card, used in a promotional draw. 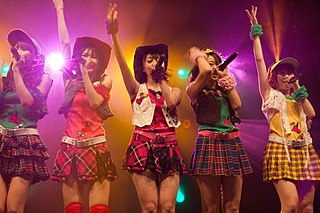 This is the discography of Japanese pop group Ikimono-gakari, who have released three Indie albums prior to 2006, and seven studio albums, three compilation albums, and numerous singles since joining Epic Records in 2006. 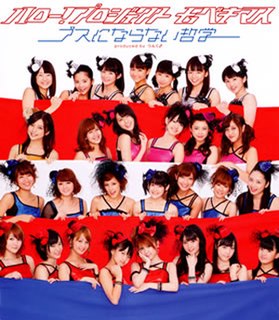 "Busu ni Naranai Tetsugaku" is a 2011 song by Hello! Project Mobekimasu. The song is a collaboration between Hello! Project acts Morning Musume, Berryz Kobo, Cute, Erina Mano, and Smileage. The single was released on November 16, 2011 on the label Zetima. 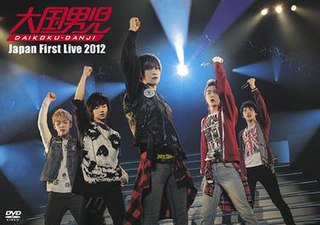 Daikoku Danji Japan First Live 2012 is the first live DVD released by Korean boy group The Boss. It was released on June 6, 2012 on their Japanese label Sony Music Entertainment. 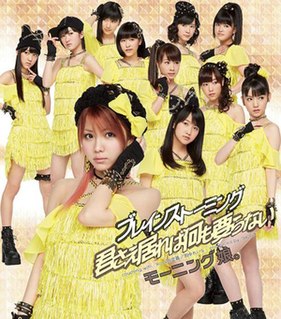 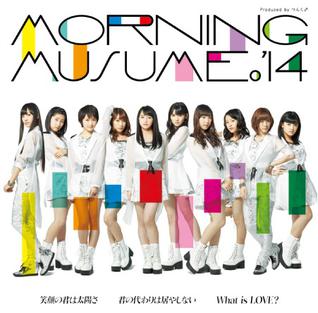 Egao no Kimi wa Taiyou sa / Kimi no Kawari wa Iyashinai / What is LOVE? is Morning Musume's 55th single, and the first to be released under the name of Morning Musume '14. It was released on January 29, 2014 in 6 editions: 2 regular and 4 limited editions.

"Very Beauty" is the 13th single by the Japanese girl idol group Berryz Kobo. It was released in Japan on March 7, 2007, and debuted at number 11 in the weekly Oricon singles chart.

"Dakishimete Dakishimete" is the 19th single by the Japanese girl idol group Berryz Kobo. It was released in Japan on March 11, 2009, and debuted at number 8 in the weekly Oricon singles chart.

"Seishun Bus Guide / Rival" (青春バスガイド/ライバル) is the 20th single by the Japanese girl idol group Berryz Kobo. It was released in Japan on June 3, 2009, and debuted at number 4 in the weekly Oricon singles chart.

"Watashi no Mirai no Danna-sama / Ryūsei Boy" (私の未来のだんな様/流星ボーイ) is the 21st single by the Japanese girl idol group Berryz Kobo. It was released in Japan on November 11, 2009, and debuted at number 5 in the weekly Oricon singles chart.

"Heroine ni Narō ka!" (ヒロインになろうか!) is the 25th single by the Japanese girl idol group Berryz Kobo. It was released in Japan on March 2, 2011, and debuted at number 7 in the weekly Oricon singles chart.

Nogizaka46 has released twenty-five singles and five albums, as well as numerous music videos and concert performance videos. Million-selling singles have included "Influencer" and "Synchronicity", each of which won a Japan Record Awards Grand Prix, as well as "Kaerimichi wa Tōmawari Shitaku Naru" and "Sing Out!". Album releases include the studio albums Tōmei na Iro, Sorezore no Isu, Umaretekara Hajimete Mita Yume, and Ima ga Omoide ni Naru made. The group also released a compilation of "under" songs, written for members who perform at concerts but are not part of the main selection group for promoting singles, with the title Boku dake no Kimi: Under Super Best.

Yoasobi is a Japanese music duo composed of vocaloid music producer Ayase and vocalist Ikura. The group has released the songs based on short stories posted on Monogatary, a website operated by Sony Music Entertainment Japan. Now, the group also has released songs from various novels and novels newly written in tie-ups.