Tsukinowa-dera or Gatsurin-ji (月輪寺) is a Buddhist temple near Mount Atago in Ukyō-ku, Kyoto, Japan. The temple was first founded in 781, it is associated with the Shugendō practices of Kūya and Hōnen. Its treasures include eight Heian period statues. Images of Amida Nyorai and Kūya chanting the nembutsu are amongst those designated Important Cultural Properties. [1] [2] 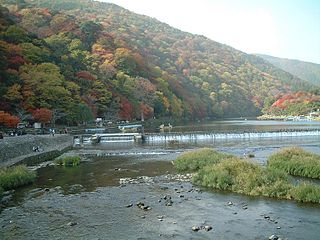 Hase-dera (長谷寺) is the main temple of the Buzan sect of Shingon Buddhism. The temple is located in Sakurai, Nara Prefecture, Japan. The Main Hall is a National Treasure of Japan.

Kōzan-ji (高山寺), officially Toganōsan Kōsan-ji (栂尾山高山寺), is a Buddhist temple of the Omuro sect of Shingon Buddhism in Umegahata Toganōchō, Ukyō Ward, Kyoto, Japan. Kōzan-ji is also known as Kōsan-ji and Toganō-dera. The temple was founded by the Shingon scholar and monk Myōe and is renowned for its numerous national treasures and important cultural properties. The Chōjū-jinbutsu-giga, a group of ink paintings from the 12th and 13th centuries, are among the most important treasures of Kōzan-ji. The temple celebrates Biyakkōshin, Zenmyōshin and Kasuga Myōjin, as well as the temple's tutelary Shintō deity. In 1994, it was registered as part of the UNESCO World Heritage Site "Historic Monuments of Ancient Kyoto".

Daian-ji (大安寺) was founded during the Asuka period and is one of the Seven Great Temples of Nara, Japan. 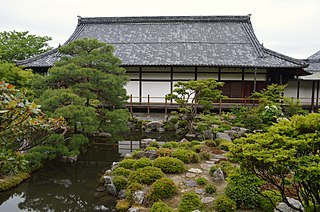 Tōji-in (等持院) is a Buddhist temple of the Rinzai Tenryū sect located in Kita Ward, Kyoto, Japan, and one of two funeral temples (bodaiji) dedicated to Ashikaga Takauji, first shōgun of the Ashikaga dynasty. Its main object of worship is Shakyamuni, and its honorary sangō prefix is Mannenzan (萬年山).

Seiryō-ji (清凉寺) is a Buddhist temple in the Saga district of Ukyō-ku, Kyoto, Japan. It is also known as Saga Shaka-dō. It is devoted to the practice of Yuzu Nembutsu. Initially, the temple belonged to the Kegon sect; then it became a Pure Land temple. The honzon is an image of Gautama Buddha (Shaka-nyorai). The wooden statue is a National Treasure of Japan, and is an example of a hibutsu. Seiryō-ji also possesses National Treasure statues of the Amitābha (Amida) trinity, and other National Treasures and Important Cultural Properties.

Kūya was an itinerant Japanese Buddhist monk, or hijiri (聖), later ordained in the Tendai Buddhist sect, who was an early proselytizer of the practice of the nembutsu amongst the populace. Kuya's efforts helped promote the Pure Land teaching of Buddhism to the capital at a time when the movement was first gaining traction in Japan. For his efforts, Kuya earned the name ichi hijiri and Amida hijiri. Kūya was known for taking images with him on his travels and added musical rhythm and dance to his prayers, known as odori nembutsu. Like Gyōki, he is said to have performed works for the public benefit such as building roads and bridges, digging wells, and burying abandoned corpses.

Rokuharamitsu-ji (六波羅蜜寺) is a Buddhist temple in Kyoto, Japan. Founded by Kūya in 951, the Hondō was burned during the wars at the end of the Heian period. Its replacement of 1363, damaged during the Meiji period, was restored in 1969. The temple house a number of statues of the Heian and Kamakura periods that have been designated Important Cultural Properties, including a Kamakura period image of its founder Kūya, as well as a Heian Jūichimen Kannon that is a National Treasure. 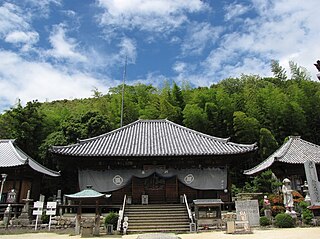 Jōdo-ji (浄土寺) is a Shingon temple in Matsuyama, Japan. It is Temple 49 on the Shikoku 88 temple pilgrimage, and temple two on The Thirteen Buddhist Sites of Iyo. 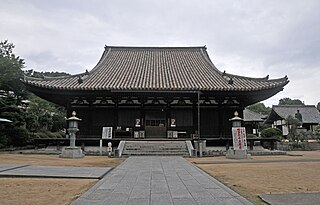 Taisan-ji (太山寺) is a Shingon temple in Matsuyama, Ehime Prefecture, Japan. It is Temple 52 on the Shikoku 88 temple pilgrimage, and Temple 3 on the Thirteen Buddhist Sites of Iyo. The Hondō is a National Treasure.

Ōbai-in (黄梅院) is an autonomous sub-temple of Daitoku-ji, Kyoto, Japan,the headquarters of the Daitoku-ji school of the Rinzai sect of Zen Buddhism. The Hondō (1586) and Kuri (1589) have been designated Important Cultural Properties. Momoyama period monochrome fusuma paintings of Seven hermits in a bamboo grove, Landscape with figures, and Geese, by Unkoku Tōgan (1588), have also been designated Important Cultural Properties. The severed head of the statue of Sen no Rikyū, its position fatally regarded as hubristic by Toyotomi Hideyoshi, was once kept at Obai-in. 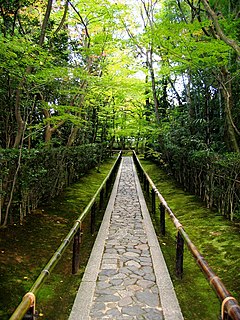 Kōtō-in (高桐院) is a sub-temple of Daitoku-ji, Kyoto, Japan. It was founded by Hosokawa Tadaoki. There is a teahouse, the Shōkō-ken, and the gardens are celebrated for their momiji. A pair of Southern Song monochrome hanging scrolls with landscape have been designated a National Treasure. Many other works are aired annually in October. 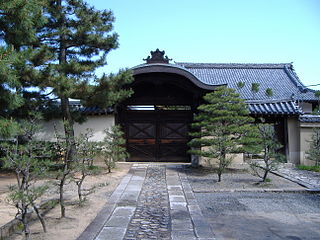 Sōken-in (総見院) is a sub-temple of Daitoku-ji, Kyoto, Japan. It was founded by Toyotomi Hideyoshi in 1582 as the mortuary temple of Oda Nobunaga. Hideyoshi granted the temple three hundred koku and staged his celebrated Daitoku-ji tea gathering on its grounds in 1585. During the early years of the Meiji period its precinct was demolished and its treasures relocated; Sōken-in was revived in 1926. The seated wooden statue of Oda Nobunaga of 1583, lacquered, with inlaid eyes and an inscription on the base, an Important Cultural Property, was returned in 1961. Nobunaga's funeral and Hideyoshi's foundation of the sub-temple 'with the very best wood available, a remarkable thing to see' was recounted by the Portuguese missionary Luís Fróis in his contemporary História de Japam.

Jukō-in (聚光院) is a sub-temple of Daitoku-ji, Kyoto, Japan. Founded in 1566 as the mortuary temple of Miyoshi Nagayoshi, in 1589 Sen no Rikyū designated it as the mortuary temple for his family. The Hondō (1583) and chashitsu (1739) are Important Cultural Properties and the gardens have been designated a Place of Scenic Beauty. A painting of Miyoshi Nagayoshi (1566) has also been designated an Important Cultural Property. The temple also contains a great number of fusuma paintings done by Kanō Eitoku.

Atago Shrine is a Shinto shrine on Mount Atago, the northwest of Kyoto, Japan. Enshrined is Atago Gongen who protects Kyoto from fire. Shugendō practices and a place for worship are known from the eighth century. The late-Kamakura period Honden has been designated an Important Cultural Property. Atago Jinja is the head of nine hundred Atago shrines throughout Japan. 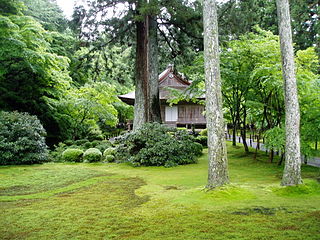 Sanzen-in (三千院) is a Tendai school monzeki temple in Ōhara, Kyoto, Japan. The Heian period triad of Amida Nyorai flanked by attendants is a National Treasure.

Anrakuju-in (安楽寿院) is a Buddhist temple in Fushimi, Kyoto, Japan, built by former-Emperor Toba in 1137. The temple houses a number of Important Cultural Properties and the emperors Toba and Konoe are buried in the grounds. The Ashikaga estate from which the Ashikaga clan derived its name once belonged to Anrakuju-in. 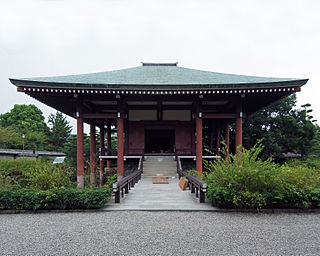 Chūgū-ji (中宮寺) is a temple in Nara Prefecture, Japan, that was founded as a nunnery in the seventh century by Shōtoku Taishi. Located immediately to the northeast of Hōryū-ji, its statue of Miroku and Tenjukoku mandala are National Treasures.

(in Japanese) Photographs of Gatsurinji and its statues